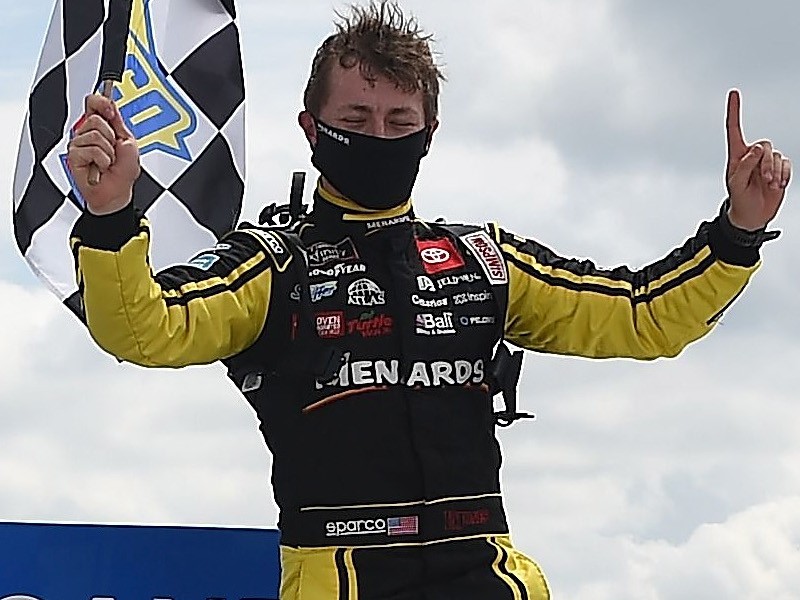 Brandon Jones held off Sheldon Creed during a fierce two-lap battle Sunday morning at Pocono Raceway and pulled away to win the rain-delayed Pocono Organics 150 at the 2.5-mile triangular track.

Jones, from Atlanta, Georgia, sealed his first NASCAR Gander RV & Outdoors Truck Series victory when Sheldon Creed’s Chevrolet got loose in the Tunnel Turn as he and Jones were racing side-by-side for the lead. Jones pulled out to a comfortable advantage through turn 3 and arrived at the finish line with a .864-second margin over runner-up Austin Hill, who charged past Creed in the final corner.

“That was a heck of a battle,” said Jones, a full-time NASCAR Xfinity competitor who has won twice in that series. “I know it was fun to watch on TV — it was really fun for me there.”

Despite driving for Kyle Busch Motorsports, whose equipment is arguably the best in the Truck Series, Jones said the expectations to win weren’t that weighty.

“It’s not really that much pressure, honestly,” Jones said. “There’s so much they provide for us. We were all on a call with him (owner Kyle Busch) last night after the Cup race. He gave us so much information that led to this win today.”

Jones inherited the lead from teammate Christian Eckes on lap 49, when Eckes blew a right rear tire in the Tunnel Turn and smacked the outside wall. The root cause of the incident may have been earlier contact between Eckes’ Toyota and Chase Purdy’s Chevrolet on pit road.

“It sucks, for sure,” said Eckes, who was 11 laps away from winning his first race in the series. “Probably caused by me. We had a little contact on pit road. It might have created a rub—I don’t know. They said everything was clear… We could never really get track position. We finally got there and blew a tire.”

After the record-tying ninth caution of the race for Tim Viens’ spin in turn 1, Creed led the next-to-last lap, but Jones pulled even before the trucks got back to the first corner. Jones and Creed raced side-by-side until Creed lost traction and momentum in the Tunnel Turn.

Reigning and three-time series champion Matt Crafton didn’t make it through the first corner of the first lap. Contact between the Chevrolets of Austin Wayne Self and Codie Rohrbaugh sent Rohrbaugh’s truck sliding out of control up the track into Crafton’s No. 88 Ford, knocking Crafton into the outside wall.

Rohrbaugh and Crafton were eliminated seconds after the race began and retired in the 39th and 40th positions, respectively.

“My spotter said, ‘Three-wide, three-wide,’ and I thought I gave him enough room,” Crafton said after exiting the infield care center. “He got clipped in the left rear. That’s what he was telling me inside (the care center).

“Then he went and got me in the left rear and spun me. Wrong place, wrong time, so move on to Kentucky.”

The field didn’t make it through the next restart lap on lap 6 either. Raphael Lessard’s No. 4 Toyota took evasive action in turn 3, clipped the infield grass with his left-side tires and shot up the track into Self’s Silverado, knocking both trucks out of the race.

“I tried to go on the inside of the 24 (Chase Purdy), and he was kind of slow, and then (he) just kind of blocked me a little bit,” Lessard said. “And I just kind of smacked the fence there.”

On lap 12, Ty Majeski — running third after starting 19th — tried to block Grant Enfinger’s Ford on the frontstretch and paid a heavy price, nosing hard into the inside SAFER barrier. Before the 15-lap first stage was over, five of the 40 trucks were out of the race.

Notes: Rescheduled from Saturday because of rain the race was the opening leg in a first-ever NASCAR tripleheader in which all three of the top touring series would race on the same track on the same day… Creed led the first 30 laps and won the first two stages wire-to-wire but didn’t lead again until he took the top spot on lap 59 of 60.