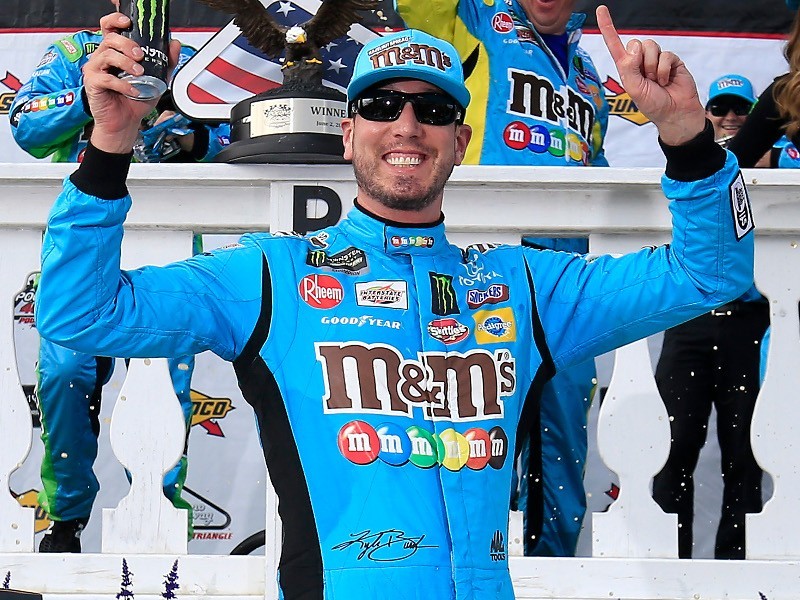 As the NASCAR Cup Series heads for an unprecedented weekend at Pocono Raceway, Joe Gibbs Racing drivers have a significant streak on the line.

The current JGR drivers have won the last five races at the Tricky Triangle, with Kyle Busch accounting for three of those victories and Denny Hamlin and Martin Truex, Jr. one each – though Truex’s win was with Furniture Row Racing.

A Saturday/Sunday doubleheader at Pocono presents a unique opportunity to add two wins to the streak. For the first time in NASCAR history, the Cup series will contest back-to-back events at the same track and on the same weekend.

In Saturday’s Pocono Organics 325 and Sunday’s Pocono 350, drivers will race for a combined 675 miles using the same cars and same engines. For Sunday’s race, the starting order will be fixed by inverting the top 20 finishers from Saturday’s event.

With the Cup Series having reached the midpoint of its 26-race regular season last Sunday at Talladega Superspeedway, Busch, the reigning champion, is winless this year. Hamlin, on the other hand, has posted a series-best three victories, and Truex has a short-track triumph at Martinsville.

Busch sees the historic doubleheader weekend at Pocono as a chance to break into the win column. He has been especially good at the 2.5-mile triangular track since his pairing with crew chief Adam Stevens in 2015. Busch has notched a victory at Pocono in each of the last three years.

“We’ve run really well there,” Busch said. “It’s a good track for us. I’ve learned a lot from my teammate, Denny Hamlin, who’s won there, and certainly working with Martin (Truex, Jr.) and his guys has also brought on some new, fresh ideas, which help.

“It’s been a good track for us, and hopefully we can carry our M&M’s Minis colors to Victory Lane there this weekend.”

Standing in Busch’s way will be his teammates, particularly Hamlin, who won both Pocono races from the pole during his 2006 rookie season. Hamlin also went back-to-back in the second race of 2009 and the first race of 2010. Hamlin is the most recent victor at Pocono, and he’d love to preserve his streak of winning in pairs.

Should he do so, Hamlin would tie six-time Pocono winner Jeff Gordon for most victories at the track.

Ryan Blaney, last Sunday’s winner at Talladega, is the last driver to have taken a checkered flag at Pocono in something other than a Toyota. He and Team Penske teammates Brad Keselowski and Joey Logano have combined for five victories in 13 races this season, and each has won one race at the Tricky Triangle.

The short history of the NASCAR Xfinity Series at Pocono Raceway features four winners, none of whom will be racing in Sunday’s Pocono Green 225.

The top two finishers from last year’s race — Cole Custer and Tyler Reddick — have graduated to the NASCAR Cup Series. That, coupled with the event’s status as the final race of the year in the Xfinity Dash 4 Cash program, guarantees a fresh face in Victory Lane on Sunday.

Allmendinger subsequently added the June 14 Dash 4 Cash race at Homestead-Miami Speedway to his schedule and collected the $100,000 bonus as the highest finisher among four eligible drivers there. Ross Chastain qualified for the Dash 4 Cash payday at Homestead and pocketed another $100,000 with a second-place run at Talladega — behind Kaulig teammate Justin Haley.

Both Chastain and Haley are eligible for the bonus at Pocono (along with Austin Cindric and Alex Labbe), giving Kaulig a 50-50 chance to add another $100,000 to its bankroll.

“It’s a really tough race track,” says Haley, who now has won races in all three of NASCAR’s top touring series, as well as in the ARCA Menards Series. “Having no practice is going to be difficult at a track that is so different from the others. I can’t wait to get there, though.

“We’re coming off some momentum at Talladega, and hopefully we will have some speed and get that 100 grand at the end of the weekend.”

Five races into the 2020 NASCAR Gander RV & Outdoors Truck Series, Grant Enfinger is the only series regular to have visited Victory Lane.

Enfinger took the checkered flag in the season opener at Daytona International Speedway and earned his second victory June 6 at Atlanta Motor Speedway. Full-time NASCAR Cup Series drivers won the other three races: Chase Elliott in the much-ballyhooed bounty race at Charlotte and Kyle Busch at Las Vegas (before the pandemic hiatus) and at Homestead-Miami (June 13).

Remarkably, Enfinger is the only full-time driver in the series who has accumulated Playoff points. The driver of the No. 98 ThorSport Racing Ford has 11 — five each for the two victories and one for a stage win. No other driver eligible for the series title has scored a single Playoff point.

Interestingly, however, Enfinger is third in the series standings, 48 points behind leader Austin Hill and four behind second-place Christian Eckes. Those two drivers have accumulated more stage points — as opposed to Playoff points — in the first five races.

NASCAR Cup Series – Race 2
Next Race: Pocono 350
The Place: Pocono Raceway – Long Pond, PA
The Date: Sunday, June 28
The Time: 4 p.m. ET
TV: FS1, 3:30 p.m. ET
Radio: MRN, SiriusXM NASCAR Radio
Distance: 350 miles (140 laps); Stage 1 (Ends on Lap 30), Stage 2 (Ends on Lap 85), Final Stage (Ends on Lap 140)
2019 Race Winner: Denny Hamlin
What To Watch For: This weekend’s NASCAR Cup Series doubleheader will be the first time in series history that it will run back-to-back races in consecutive days at the same track without qualifying races being involved. … The last time the NASCAR Cup Series raced on back-to-back days was on August 27-28, 1971 but the events took place at two different tracks – the first of the two races was at Columbia Speedway in Columbia, South Carolina on Aug. 27 and the event was won by NASCAR Hall of Famer Richard Petty. The second race was at Hickory Speedway in Hickory, North Carolina and won by Tiny Lund. … Opened in 1968 as a three-quarter-mile track, Pocono Raceway held the first race on the 2.5-mile track in 1971. The first NASCAR Cup Series race at Pocono Raceway was on August 4, 1974, and the event was won by NASCAR Hall of Famer Richard Petty (Dodge, 115.593 mph). … In total, Pocono Raceway has hosted 84 NASCAR Cup Series races producing 46 different pole winners and 36 different race winners. NASCAR Hall of Famer Bill Elliott and Ken Schrader are tied for the series-most poles at Pocono with five each. NASCAR Hall of Famer Jeff Gordon leads the series in wins at the 2.5-mile raceway with six victories. The youngest series race winner is Joey Logano (08/07/2011 – 21 years, 2 months, 14 days) and the oldest is Harry Gant (06/17/1990 – 50 years, 5 months, 7 days). … Of the 36 previous series Pocono winners, 11 are entered this weekend, led by Joe Gibbs Racing’s Denny Hamlin with five victories; including winning the series’ most recent visit to Pocono last July. If Hamlin wins this weekend he can tie or surpass NASCAR Hall of Famer Jeff Gordon for the series-most wins at Pocono Raceway with six trophies. Hendrick Motorsports leads the series in wins at Pocono Raceway with 17 victories – Jeff Gordon (six), Tim Richmond (three), Jimmie Johnson (three), Dale Earnhardt Jr. (two), Kasey Kahne (one), Geoff Bodine (one) and Terry Labonte (one). Joe Gibbs Racing has the second-most series Pocono wins with 14 – Denny Hamlin (five), Kyle Busch (three), Bobby Labonte (three), Matt Kenseth (one), Joey Logano (one) and Tony Stewart (one). … A total of four NASCAR Cup Series drivers have posted their first career win at Pocono Raceway: Ryan Blaney (06/11/2017), Chris Buescher (08/01/16), Denny Hamlin (06/11/06) and Jeremy Mayfield (06/21/98). Denny Hamlin (2006) is the only active driver to win at Pocono in his first appearance.

NASCAR Xfinity Series
Next Race: Pocono Green 225
The Place: Pocono Raceway – Long Pond, PA
The Date: Sunday, June 28
The Time: 12:30 p.m. ET
TV: FS1, 12:30 p.m. ET
Radio: MRN, SiriusXM NASCAR Radio
Distance: 225 miles (90 Laps); Stage 1 (Ends on Lap 20), Stage 2 (Ends on Lap 40), Final Stage (Ends on Lap 90)
2019 Winner: Cole Custer
What To Watch For: This weekend will be the fifth NASCAR Xfinity Series race held at Pocono Raceway, dating back to the inaugural event on June 4, 2016 – the series’ first race was won by Kyle Larson, driving for Chip Ganassi Racing. The four previous Xfinity Series races at Pocono have produced three different pole winners (Erik Jones 2016, Kyle Benjamin 2017 and Cole Custer 2018, 2019) and four different race winners (Kyle Larson 2016, Brad Keselowski 2017, Kyle Busch 2018, Cole Custer 2019). Custer is the only one of the four winners to accomplish the feat from the pole. … None of the previous four winners are entered this weekend at Pocono. … The youngest series winner at Pocono is Cole Custer (06/01/2019 – 21 years, 4 months, 9 days) and the oldest is Brad Keselowski (06/10/2017 – 33 years, 3 months, 29 days). … A total of 10 drivers entered in this race have made all four previous series starts at Pocono. … Kyle Busch, Kyle Larson and Cole Custer lead the series in top fives at Pocono with two each. … Of the four Xfinity races at Pocono the 2017 race had the most lead changes (12) and the 2016 race had the fewest (six). Last season’s race 10 lead changes and holds the series record at Pocono for the most cautions (seven) and the closest margin of victory at 0.266-second. … All five 2020 Sunoco Rookie of the Year contenders will be making their series track debuts at Pocono Raceway this weekend. … Pocono Raceway will also be hosting the last installment of the Dash 4 Cash program. Four drivers will battle it out with $100,000 prize going to the highest finisher. This weekend’s Dash 4 Cash qualifiers are Justin Haley, Ross Chastain, Alex Labbe and Austin Cindric.

NASCAR Gander RV & Outdoors Truck Series
Next Race: Pocono Organics 150
The Place: Pocono Raceway – Long Pond, PA
The Date: Saturday, June 27
The Time: 12:30 p.m. ET
TV: FS1, 12:30 p.m. ET
Radio: MRN, SiriusXM NASCAR Radio
Distance: 150 miles (60 laps); Stage 1 (Ends on Lap 15), Stage 2 (Ends on Lap 30), Final Stage (Ends on Lap 60)
2019 Race Winner: Ross Chastain
What To Watch For: Pocono Raceway will host the 11th NASCAR Gander RV & Outdoors Truck Series race at the 2.5-mile, three-turn raceway this Sunday prior to the NASCAR Cup Series race. The first Gander Trucks race at Pocono took place on July 31, 2010 and was won by Elliott Sadler driving for Kevin Harvick Inc. … The 10 series races at Pocono Raceway have produced eight different pole winners and nine different race winners. … Kyle Busch leads the series in wins at Pocono with two (2015, 2018). … Eight different drivers share the series lead in poles at Pocono with one each; twice qualifying was cancelled due to weather (2013, 2016). … Four of the 10 races have been won from pole or first starting position; the most recent to do it was Kyle Busch in 2018. … Ross Chastain won this race last season from the second starting position, and is the only previous winner entered. … The youngest Gander Trucks winner at Pocono is Erik Jones (08/01/2015 – 19 years, 2 months, 2 days) and the oldest is Kevin Harvick (08/07/2011 – 35 years, 7 months, 30 days). … Of the 10 series races at Pocono the 2014 race produced the most lead changes (10) and the 2011 the fewest (two). … Three drivers have made all series starts at Pocono – Norm Benning, Matt Crafton and Johnny Sauter. … The 2013 event has the closest series finish at Pocono with a 0.270-second margin of victory. The last five Gander Trucks races at Pocono have had a margin of victory of more than a second. … Grant Enfinger is the only series driver this season to win and lock himself into the Playoffs leaving nine spots up for grabs on points. Last season through the first five races the scenario was similar Austin Hill was the only series driver with a win, but Johnny Sauter added his name to the list with a win at Dover the sixth race of the year.