By Lauren Hunter and Austin Eller 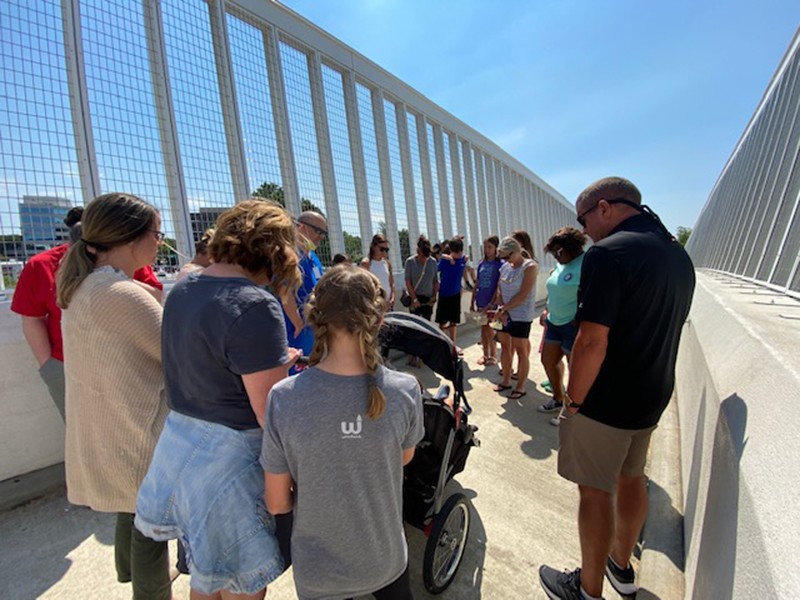 A group of Gainesville residents gathered Monday morning for a prayer walk in downtown Gainesville in response to recent protests. The group paused to say a quick prayer on the bridge across Jesse Jewell Parkway. 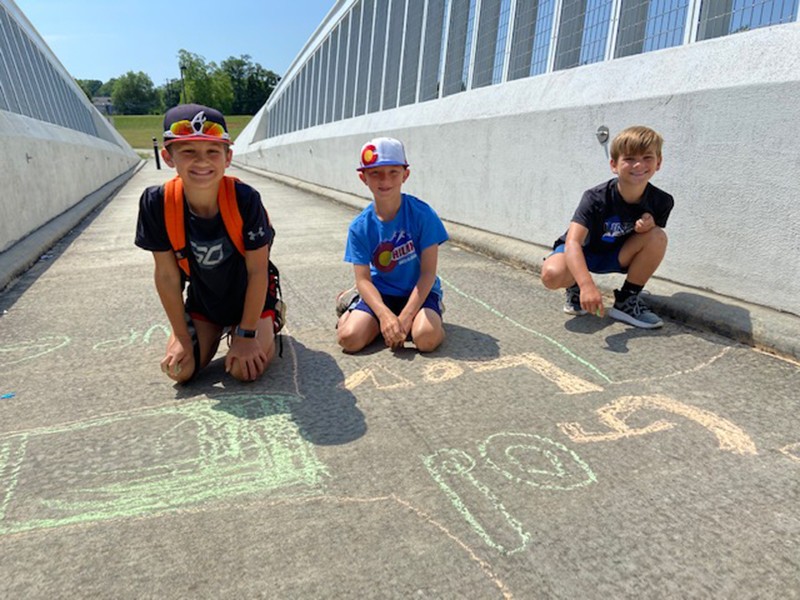 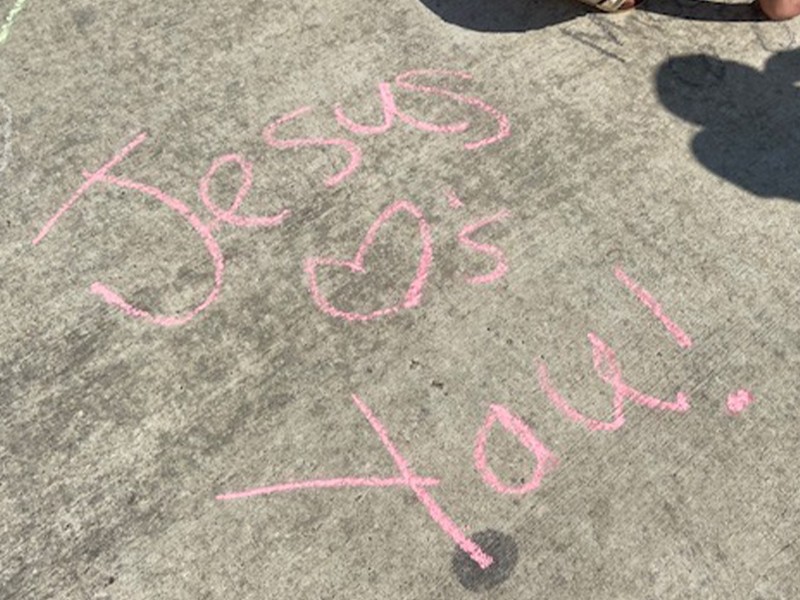 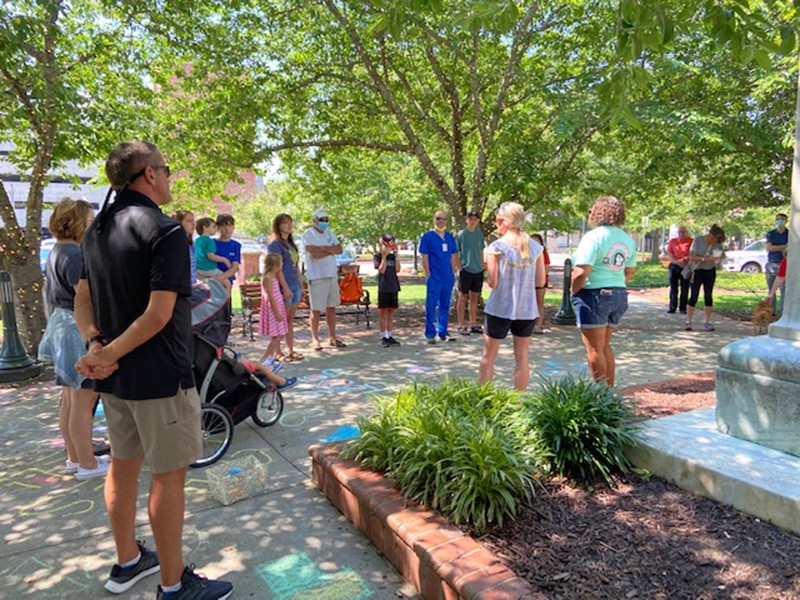 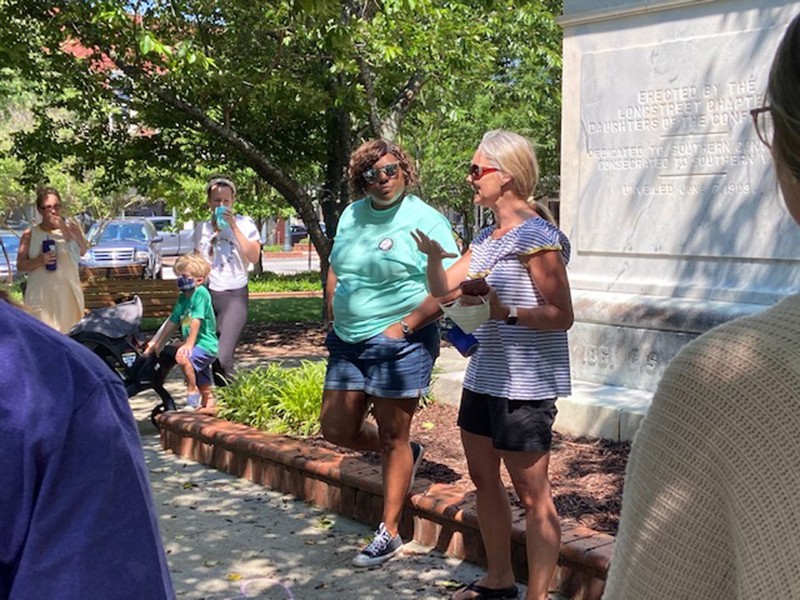 After two nights of protests over the George Floyd death in Minneapolis, citizens gathered in downtown Gainesville for a prayer walk at 11 a.m Monday, June 1, prior to the 5 p.m. rally sponsored by Newtown Florist Club.

Mary Beth Alexander, who organized the impromptu event with her high school friend Kesa Hall, said the main purpose was to promote peace and love through God.

“I know we all feel so helpless as we watch the news and we just see the anger boiling over, and the hate this is spreading across the country, and we just believe that, you know, there’s a better way,” Alexander said.

Approximately 35 people participated in the prayer walk, which began at the “Old Joe” statue in downtown Gainesville and ended at the pedestrian bridge on Jesse Jewell Parkway. Messages like “faith not fear,” were left on the bridge in chalk by the participants.

Alexander, who is white, said recent incidents over racial bias led her to feel as if she had failed her friend Hall, who is black, by not asking enough hard questions.

"I really wanted to reach out and to know and understand more about what it's like for her as a mom," Alexander said. "We're both boy moms, and we feel like we're darn good ones, but our lives are very different. The worries that she has over her children are different than mine."

For Hall, the prayer walk was a time to pray for peace and to exhibit love.

“It’s sad, and we just need accountability, but at the same time we need to love and respect and honor authority too, but we need to know that God is in the midst of this, and I just believe that if we do things in a peaceful manner, we’ll get the answers we need,” Hall said.

Monday’s protest, which will be held at the vacant lot by the pedestrian bridge on Jesse Jewell Parkway, comes after weekend protests which involved some acts of vandalism and destruction of the downtown Gainesville landscape.

Hall said vandalism should not be the answer in this situation.

Alexander said one of the goals of the prayer walk was to offer prayer for the organizers and participants of the Monday evening rally. That event is scheduled to happen between 5 and 7 p.m. 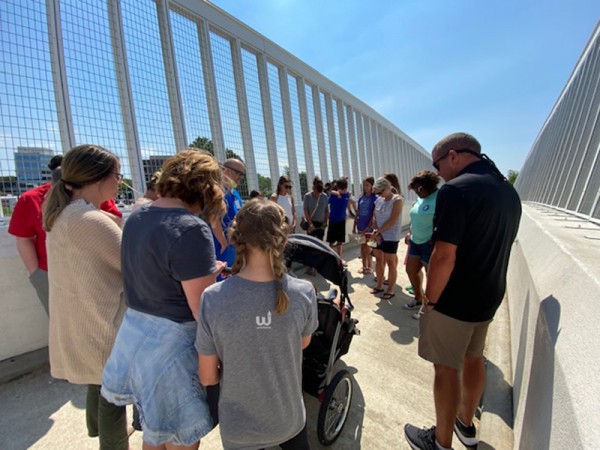 Gainesville moms organize prayer walk in response to recent protests
After two nights of protests, citizens gathered in downtown Gainesville for a prayer walk at 11 a.m Monday, June 1, prior to the 5 p.m. protest sponsored by Newtown Florist Club. 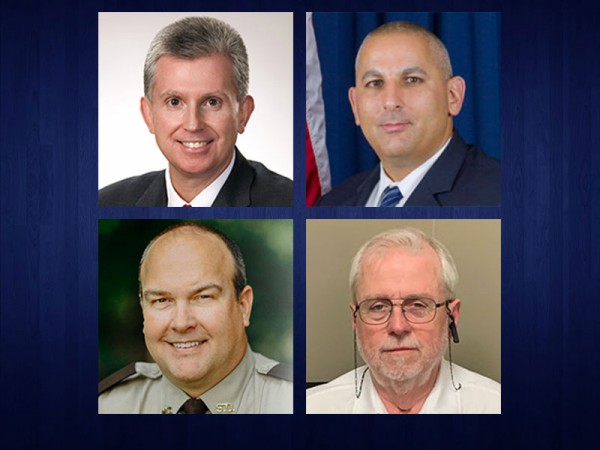 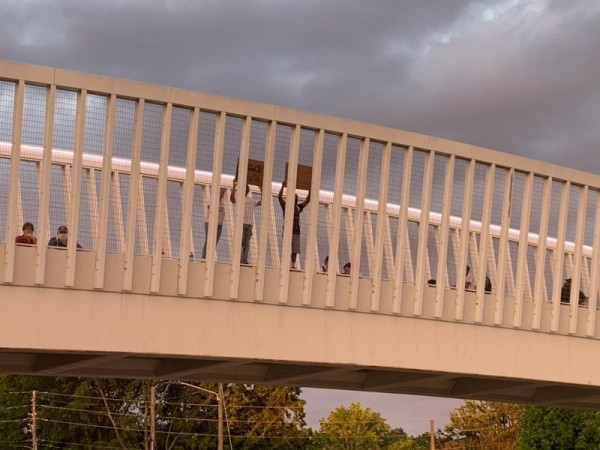 Businesses damaged as a result of Gainesville protests
What began as peaceful protests in downtown Gainesville Saturday night, ended with the damage of several area businesses. The protestors were there to voice their outrage over the recent murder of George Floyd in Minnesota.
By Kimberly Sizemore

Passenger hospitalized after train hits car in Gainesville Saturday
The passenger in a vehicle that was hit by a train in Gainesville over the weekend remains in stable condition at the hospital, at last report.
By Alyson Shields
Privacy | User Agreement | Contact | Advertise With Us
2021 © Jacobs Media Corporation. All rights reserved. EEO Report. Website by Full Media
Login / My Access
close
Search