Milly and the squirrel 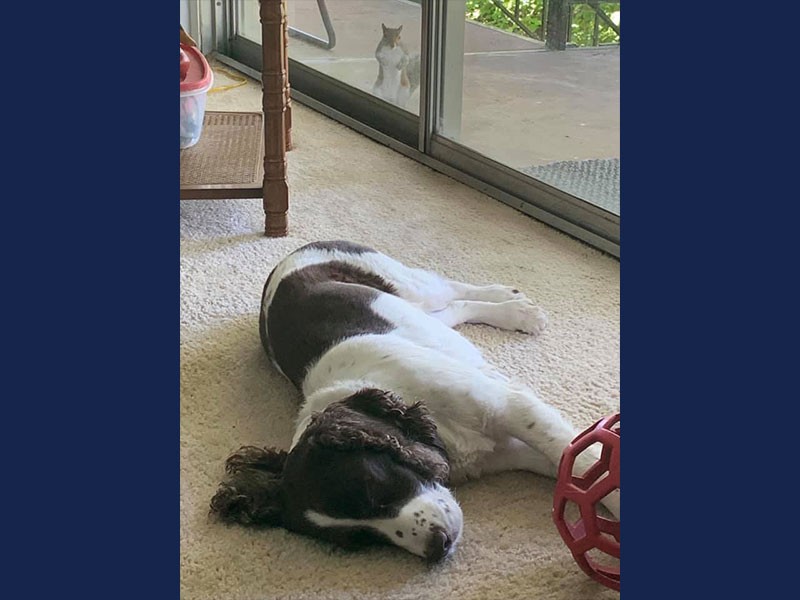 Milly, the liver and white springer spaniel who lives at my house, like Glory before her, has waged an all-out war against squirrels. She hates them. And she is determined to make our house a squirrel-free zone.

I don't know where this hatred for squirrels comes from. Glory hated them from the day I got her. Although I've never witnessed a squirrel doing anything to her, she must have been traumatized somehow when she was a wee pup, back when she wasn't much bigger than a squirrel. I imagine I'd be terrified of some varmint that was the same size as me.

For Milly, the hate came later. She was much more interested in ridding the planet of geese. But somewhere along the line, she decided she didn't like squirrels, either. In fact, she hates them. Like I hate Georgia Tech.

Mind you, she doesn't have much of a chance to catch squirrels, either. She's on a leash most of the time when we are outside because, first, I'm a law-abiding citizen who obeys the leash law and, second, I don't want her catching one of the things and bringing it back to me as gift.

But that doesn't stop her. Milly often accomplishes her mission by standing vigil at the sliding-glass door. If she sees a squirrel, she barks continuously at decibel that rivals a 747 at takeoff until the offending critter moved on.

(By the way, she still doesn't like geese. But she doesn't bark at them. She stands completely still and stares at them as they fly overhead.)

I remember one of our first walks after Milly discovered squirrels. A squirrel dashed across the sidewalk about 15 feet in front of us and headed up a tree. This dog started barking like a rottweiler.

As we walked past the tree, Milly sat down at its base and glared up, still barking. She continued this for a minute or so, as my friend and I laughed the whole time.

After a while, we were ready to keep walking.

The only way I could get her to leave was to pick her up and carry her. She continued to look over my shoulder and bark at the offending squirrel.

She seems so proud of herself when she manages to scare one away.

Then there was Saturday. I was on the sofa reading. Milly was stretched out on the floor next to the door sleeping. I heard a scratching noise. When I looked up, there was a squirrel on the deck nibbling on bird seed that had fallen out of a feeder.

Then the squirrel walked over to the sliding door, stood on its back legs and stared at Milly for what seems like several minutes. I kept thinking she would wake up and see the squirrel. And then she'd leap into action.

But she kept snoozing. I picked up my phone, careful not to wake Milly or scare off the squirrel, and took a photo. Still, Milly slept.

Finally, the squirrel gave up taunting and ran off the deck. And Milly eventually woke up.

I never showed her the photo. I didn't want to embarrass her or dampen her confidence. But I'm disappointed. For years – and through two springers – I've thought I was safe from rogue squirrels. Now I'm not so sure.