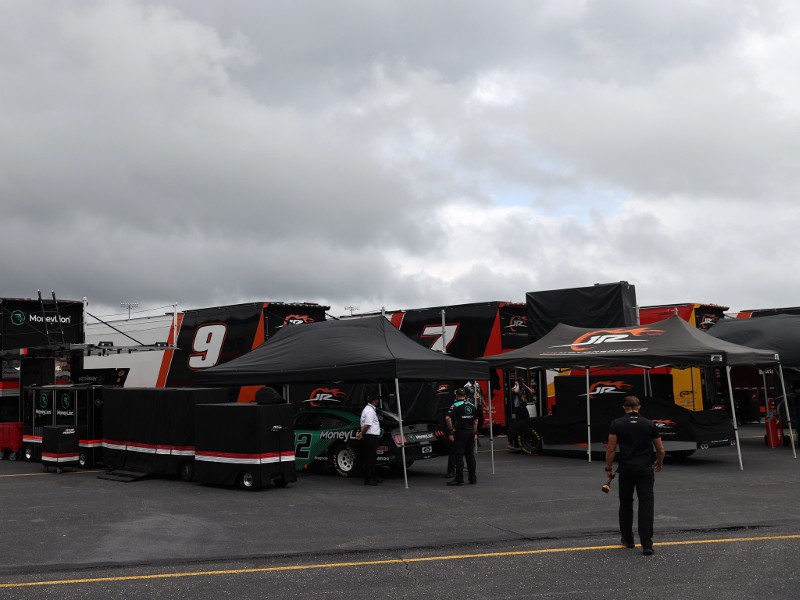 Cars sit covered in the garage area at Darlington Raceway under threatening skies on Tuesday. The NASCAR Xfinity Series race at Darlington has been postponed by wet weather to Thursday at noon. Photo: Chris Graythen/Getty Images
Contact Editor

The fans were ready, the drivers were ready and the race track was ready for the return of the NASCAR Xfinity Series.

The only one that wasn't ready was Mother Nature.

Tuesday night's planned running of the NASCAR Xfinity Series Toyota 200 at Darlington Raceway was washed out due to torrential rains that rolled through the Pee Dee region of South Carolina.

The race has now been rescheduled to a noon start on Thursday, and marks the return of the Xfinity Series to racing after a shutdown of several weeks due to the COVID-19 pandemic.

The race’s start time on Tuesday was pushed back by two hours in an attempt to skirt the impending wet weather, but rains rolled in over the 1.366 mile speedway around 5 pm.  More rain pushed in as the race approached the rescheduled 6 pm start time, delaying track drying efforts.

Noah Gragson will bring the field down to the green flag from the pole.  Michael Annett is set to roll off from second, with Justin Hailey third, Tucker, Georgia's Ryan Sieg fourth and Riley Herbst in fifth.