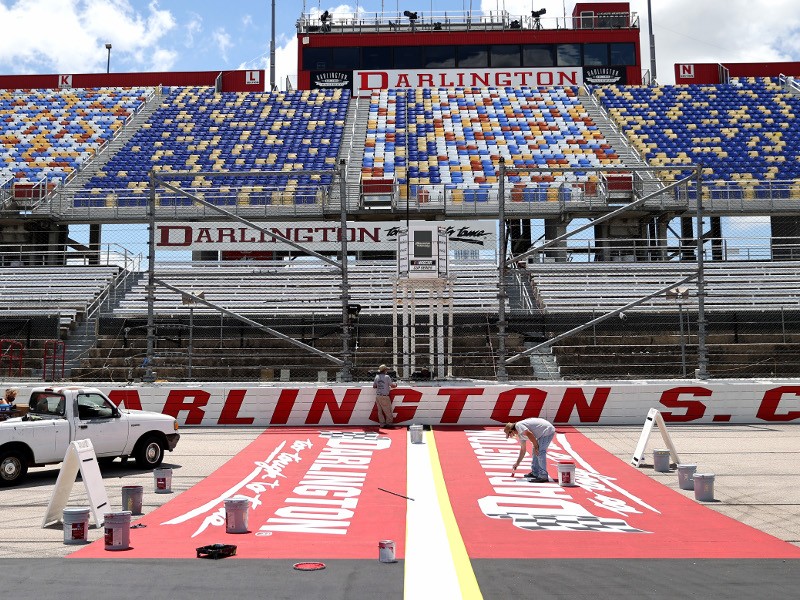 After a nearly two-month interruption in the competitive schedule, the NASCAR Cup Series will return to racing Sunday at the sport’s historic Darlington Raceway in The Real Heroes 400.

Special to this week’s race and in honor of the healthcare workers who have so tirelessly and bravely served during this pandemic, instead of each driver’s name above the window, the space will carry the name of a healthcare worker. Additionally, a group of healthcare workers will “virtually” deliver the traditional starting command – “Drivers, start your engines” – to get things started.

The event kicks off a much-anticipated resumption of NASCAR racing and it is the first of seven races – featuring all three national series, including the NASCAR Xfinity Series and the NASCAR Gander RV & Outdoors Truck Series – in the next two weeks alone. NASCAR released additional race dates this week that will feature similar one-day shows at longtime favorite venues from Atlanta and Homestead-Miami to Martinsville and Talladega that will carry the sport’s schedule through late June.

No spectators will be in attendance at the upcoming single-day events – part of the health precautions NASCAR has adopted in re-starting the sport following the pause caused by the worldwide COVID-19 pandemic. But fans, drivers, teams and the NASCAR organization are enthusiastic about the opportunity to throw the green flag this weekend and to do so at one of the sport’s most iconic racing venues.

“To get the call and know that we are going back to Darlington is huge and great for the sport of NASCAR,” Chip Ganassi Racing driver Kurt Busch said. “The industry has been collaboratively working together to make sure that this is done safely and properly to put on a good show. I’m excited to go to Darlington.”

The entire sport has echoed Busch’s comments. And there will certainly be plenty of storylines to follow this weekend.

Ryan Newman, who hasn’t raced since being involved in a last lap accident in the season-opening Daytona 500 will return to the seat of the No. 6 Roush Fenway Racing Ford – this extra time off actually afforded Newman the chance to get doctor’s clearance to compete. His team owner, NASCAR Hall of Famer Jack Roush said of his veteran’s return that Newman is so excited to be back behind the wheel of a race car it’s like a 16-year old with a new driver’s license.

“I had no apprehensions getting in the car,” Newman said of a test session he conducted at Darlington earlier in the spring as part of his medical evaluation. “I was excited to get in the car. It’s my favorite race track and just really wanted to get back in it and at it. I’ve been working really hard to do the things that I needed to do test-wise to pass my concussion test and protocol and things like that, so I could be down there with my team and Dr. Petty to establish the fact that I felt well and could prove I was well behind the seat of the race car, so I basically did that.”

Former NASCAR Cup Series champion Matt Kenseth will also be back behind the wheel, making his first start since the 2018 Homestead-Miami season finale, the last of a 15-race stint for him, ironically, in the No. 6 Roush Ford. For the remainder of this season, Kenseth will be steering the Chip Ganassi Racing No. 42 Chevrolet.

“The 42-team has run really well at Darlington in the last two years, so setup-wise, we’re probably not going to veer too far off of that. I think you’ll run those first thirty laps, see how the car feels and then be able to make some small adjustments and go from there.

“Everyone is going to be out there is ready to pounce on whatever spot they can, so you just have to be smart. Especially for me, I just need to be smart and get through those first bunch of laps to get in a rhythm, get a little bit of room to move around, breath, get kind of acclimated and go from there. I know that it’s going to be a big challenge and I’m going to do my best to try and take advantage of the opportunity.’’

Stewart-Haas Racing driver Kevin Harvick shows up at Darlington as the current NASCAR Cup Series points leader with a one-point advantage on Team Penske’s Joey Logano, who had already earned two victories (at Las Vegas and Phoenix) in the season’s first four races.

Harvick’s only Darlington victory came in his 2014 NASCAR Cup Series championship season. And he has been especially good as of late. Including that win, Harvick has five top-five and six top-10 finishes in the last six races for an average finish of 4.1.

The starting lineup and pit road assignments have been decided based on a random draw and charter team owner points. Positions 1-12, then 13-24 and then 25-36 were chosen in a random draw corresponding to owner’s points. The field is completed with grid positions 37-40 – based on open teams’ owners points.

Using that format, Team Penske’s Brad Keselowski drew the pole position at Darlington and will start alongside Hendrick Motorsports driver Alex Bowman, who earned his second career win at California’s Auto Club Speedway in March before the break.

William Byron, who won three of the eNASCAR iRacing Pro Invitational Series races during the break, will start 18th.

With NASCAR’s strict social distancing orders, only a portion of the team will be on-site. Each team is limited to only 16 members at the track and that includes the driver, crew chief and the spotter with many of the engineers expected to work from the race shops instead of being pit-side.

“It’s been a huge challenge and I really have to throw a lot of thank-yous and a lot of accolades to everybody at Hendrick Motorsports because it’s not been an easy process to get back in there in a very, very short period of time and get race cars ready to go to a very unique venue,” said seven-time Cup Series champion crew chief Chad Knaus. “Darlington is quite a lot different than any other race track that we go to, obviously. But, we’ve got staggered work hours. We’ve got blocks of people that work. We’re not really alternating days. We’re going in blocks of days to try to keep the exposure down to a minimum.

“We’re thermal testing people as they come into the facility. You see everybody wearing their masks and practicing social distancing. We’re doing all that we can to be in accordance with the CDC regulations and what the governor has put out there, to make sure we’re doing what’s right and being smart. It’s not easy.”

“Even though it’s not a super-long race, you’ve still got time to work on your car, especially at the competition caution,” said Team Penske’s Ryan Blaney. “They’re (NASCAR) giving a lot of time to kind of make wholesale adjustment if you need them. So I feel like everyone will take it easy for the first little bit, but, honestly, the muscle memory of everybody is pretty good, so once you get one run in and things like that, I think we’ll be back to normal.”