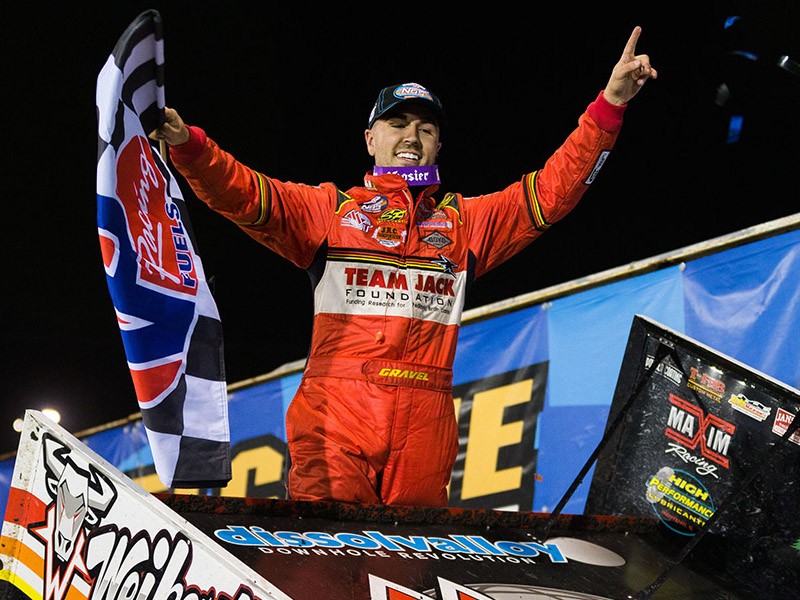 The silence was different. An oddity that confused a mind used to Johnny Gibson calling the four-wide salute and fans yelling as loud as they can in reaction to an epic battle waged for the glory.

However, it was replaced by an unexpected sense, shared by the few fortunate enough to be in attendance. A sense that you knew Friday night’s World of Outlaws NOS Energy Drink Sprint Car Invitational at Iowa’s Knoxville Raceway

Not in the sense of a Knoxville Nationals or Kings Royal. Bigger. Historic.

A 48-car field of the best Sprint Car drivers in the world that included the return of Kasey Kahne and Kyle Larson, following strict COVID-19 regulations, set by the World of Outlaws, competed for $10,000-to-win in front of an empty grandstand and thousands of fans watching live online.

The silence around the half-mile track was an adjustment, but when drivers fired their cars for the first time in more than two months, normalcy set in. And when their helmets went on, the passion, aggression and competitiveness returned, knowing no difference from before.

Every slide job the two traded for the lead added another level of tension and drama. Then, with the white flag in the air, Gravel stole the lead from Madsen to win yet another race at Knoxville with the eyes of the world upon him.

Gravel earned his first small victory of the night by setting the fastest time in Flight 2 of Qualifying, however Aaron Reutzel set overall Quick Time. Gravel dominated his Drydene Heat Race and then finished fourth in the DIRTVision Fast Pass Dash – won by Madsen.

When the Feature went green, Daryn Pittman darted ahead of Madsen for the lead and led the opening eight laps before Madsen tracked him down and powered around the outside of him. Pittman spent the next eight laps trying to claw his way back by Madsen, but the Australian’s car was in love with the black-clay and pulled away.

Behind them, Gravel looked to be struggling after an early run at the leaders. He fell from third to fifth on a restart and came close to crashing with Lynton Jeffrey as they banged side bars going into turn 2. It took him a few laps to recalibrate and work at building his momentum again. He got to fourth by lap 11, third by lap 13, and then passed Pittman for second on lap 16.

It only took Gravel another lap to eliminate Madsen’s half a track lead. Gravel had a run underneath Madsen that was sure to give him the lead, but a slower car running the bottom hindered his exit of turn 4, allowing Madsen to pull back ahead. The two then traded slide jobs each lap, but Madsen continued to carry the better momentum off the corner to hold the lead.

With about three laps to go, Gravel threw a desperate slider underneath Madsen going into turn 1. However, if he continued the trajectory of his slider he could have plowed into the side of Madsen. Gravel thought better and cranked his car sideways to avoid that outcome. He then watched Madsen fire down the backstretch to about a half of a track away.

Gravel thought the race was lost. A valiant attempt gone sour. But in this unusual event, the unexpected was ever present.

Madsen’s car got sideways off turn 4 coming to two laps to go. That allowed Gravel one final shot at running Madsen down. He closed through turns 1 and 2, but not enough to set up another desperate slider the next corner. Looking to cruise to his first World of Outlaws win at Knoxville, Madsen road the high side through turns 3 and 4, coming to one lap to go.

However, Madsen, again, had an issue trying to exit turn 4, getting sideways and killing his speed. Gravel didn’t hesitate to take advantage. He sped by Madsen down the front stretch to lead his first lap of the race and only had one more to go.

After one final lap with no mistakes, Gravel etched his name in history once again and claimed the win.

“I don’t know how,” said an elated Gravel. “Me and Ian made a lot of mistakes. If it was a 25-lap race, I would have lost that one. I was really good in (turns) 1 and 2 on the bottom, but man, I could not come off. It was so treacherous, and he was kind of running up the track and turning down and getting more momentum. If I hit my marks, I was faster, but man, it was hard to do.”

The World of Outlaws NOS Energy Drink Sprint Car Series returns to action on Friday, May 22 and Saturday, May 23 at Federated Auto Parts Raceway at I-55 for a doubleheader event with limited fans at both events.