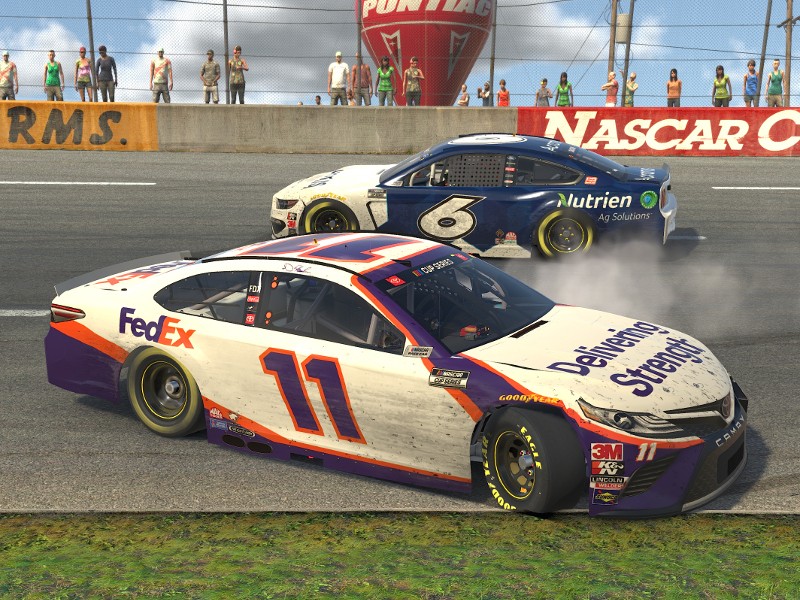 Hamlin nudged Ross Chastain out of the lead with nine laps to go in the North Wilkesboro 160, sending Chastain’s No. 6 Ford up the track to open the door.

Both Hamlin and Timmy Hill bypassed Chastain to take the top two spots. Over the closing laps, Hamlin slowly pulled away from Hill, moving away to score the win in the virtual series finale.

“I had a great battle with Christopher Bell for at least 15 laps,” Hamlin said. “That was a blast. Then Ross at the end, I never thought his tires would hold up as good as they did. It was a really fun race.

“If you talk about like a bump-n-run, that’s a textbook way of doing it. You get the guy up, out of the groove, but you don’t wreck him.”

Chastain showed his displeasure with Hamlin’s move by spinning him on the backstretch after the checkered flag.

Hamlin said it was “short-track racing.”

“Inside 10 laps to go I get to him. I’m thinking I have to make short work of him, like really, really quick,” said Hamlin. “If a caution comes, I don’t want to restart second. The leader has such an advantage. It will take five laps at least to get around him. We’ll have less than that to go by the time we went green.

“I got a good run on him. He saw I was going to be inside. Obviously he did his best to try to block there. As you could see, when I got into the back of him, I immediately checked up to try to let him catch it. Luckily he did.”

Hamlin opened the eNASCAR iRacing Pro Invitational Series season on March 22 with a win at the virtual Homestead Miami Speedway.

“Yeah, we’ve had a thing over the last few years of winning very, very important races,” Hamlin said. “The Daytona 500, the elimination race at Phoenix last year to get in the final four, then Daytona 500 this year, then the two virtual wins, the first one and the last one. Those are the two you probably want to win in those circumstances.

“Pretty awesome to be able to have success and be competitive and race for wins, whether it be in real life or virtual.”

It marked the first race on the virtual North Wilkesboro Speedway. The real world version has sat mostly empty since the final NASCAR Cup Series race there back in 1996. The track has been championed by fans for years for a revival. Earlier this year, Dale Earnhardt, Jr. led a group to clean up the track to allow iRacing to create a virtual version for the online simulation.

Hamlin had to rebound from an incident on lap five that saw him spin on the backstretch after tangling with John Hunter Nemechek. From there, he began working his way back into competition.

Hamlin would move back into the top three near the halfway point of the race, trailing then leader Christopher Bell and Chastain. With 64 laps to go, Hamlin moved around Chastain for second, and a few laps later moved to the point for the first time on the day.

A caution on lap 127 brought many of the leaders to pit road, while Chastain and Hill made the call to stay out on older tires.

Chastain led on the restart, only to see the caution fly one lap later for a multi-car shunt off turn four triggered by contact between Nemechek and Clint Bowyer.

Chastain and Hill continued to hold the top spots on the next restart with 15 laps to go. Three laps later, Hamlin – on fresher tires – bypassed Hill for second, setting up the final pass for the lead three laps later.

Hill held on to finish in second, with Tyler Reddick in third, Chastain in fourth and Peachtree City, Georgia’s Garrett Smithley in fifth.

NASCAR is set to return to real world racing on Sunday, May 17, with the NASCAR Cup Series set to compete without fans at the historic Darlington Raceway in South Carolina.

“I envision people are going to be pretty timid, at least for the first few laps, just trying to understand, checking your travels,” said Hamlin. “There’s plenty of times where these things unload, the cars are hitting the racetrack, you’re not ready to be in a pack quite yet. That will certainly be different.”