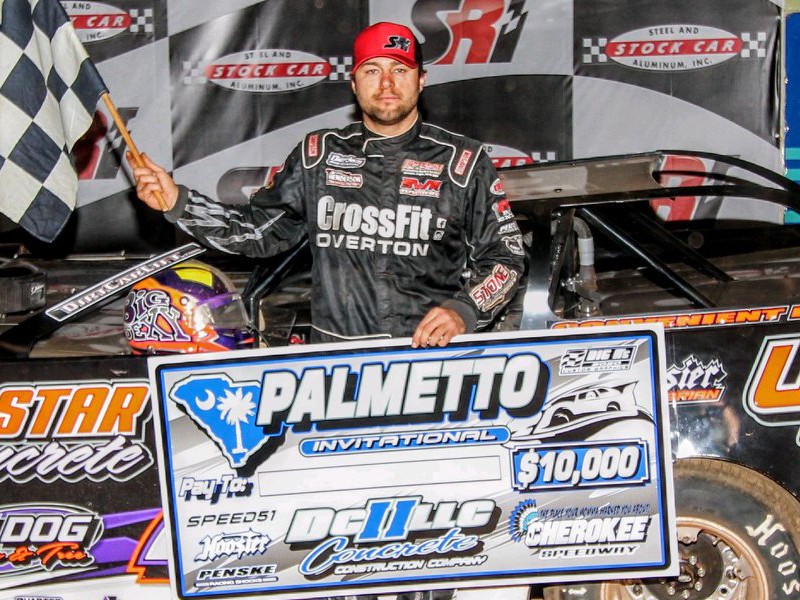 After weeks of sitting silent, racing action returned to Gaffney, South Carolina, as racers from across the south gathered for the Palmetto Invitational at Cherokee Speedway.

And in the end, the race came down to a battle of Peach State racers.

Brandon Overton came away with the victory in a last lap duel with Casey Roberts at the 3/8-mile clay raceway, taking home the $10,000 winner’s payday in the process.

While the stands sat empty due to restrictions from the COVID-19 pandemic, the action on the track was hot.

Overton, of Evans, Georgia, was fastest in time trials, but it was Toccoa, Georgia native Roberts powering to the lead on the second lap of the 60-lap feature.

Roberts would pace the event for the next 58 laps, but came under fire with the white flag in the air from Overton.

As the lead duo powered into the first turn for the final time, Overton was able to get to the inside of Roberts, and pulled alongside as they raced through turn two. Overton slipped past as they raced down the backstretch. Roberts tried to regain the lead, but spun in turn three, allowing Overton to move away and score the win.

Chris Madden finished in second, followed by Kyle Strickler in third, Derrick Ramey in fourth and Anthony Sanders in fifth.

Roberts was credited with a 14th place finish.