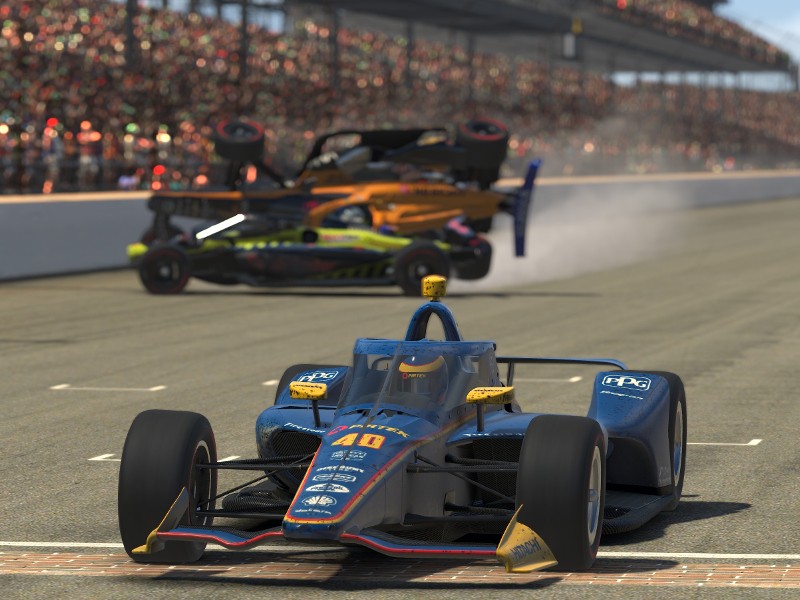 Scott McLaughlin entered the final turn of the First Responder 175 in fifth place, but he took the checkered flag as the winner less than one-half mile later.

Yes, the finish of the INDYCAR iRacing Challenge finale was that wild.

Oliver Askew and Santino Ferrucci collided on the front straightaway while dueling for the victory with the checkered flag and famous Yard of Bricks start-finish line in sight, letting McLaughlin sneak through for a surprising victory, with NTT INDYCAR SERIES veteran Daly’s No. 31 Chevrolet right behind.

“I saw a whole bunch of crashing,” McLaughlin said. “Unbelievable to get the PIRTEK car into Victory Lane. It was really cool. From that last caution, my front wing was damaged, so I was just literally just trying to hope there was a wreck at the end, and there were two.

“We were at the right place at the right time. I thought we were going to get third, and then the two wrecked in front of us, and we got the win. That was exhilarating. That was cool.”

Just .902 of a second separated the top five finishers after a wild final lap that capped an eventful race in which 12 drivers – more than a third of the 33-driver field – swapped the lead 19 times. Pole sitter McLaughlin was the only driver among the top 12 finishers to start from one the top 10 spots on the grid.

Askew led teammate O’Ward under the white flag with one lap to go around the 2.5-mile oval. Marcus Ericsson was third in the No. 8 Chip Ganassi Racing Honda.

The three cars went three-wide entering turn 3 on the final lap, with Ericsson diving under O’Ward for the lead and Askew on the outside.

O’Ward then tried to return the favor in turn 4, attempting to slip under leader Ericsson. But the gap wasn’t there, and the two cars made contact, sending Ericsson heavily into the SAFER Barrier in turn 4.

Askew slipped through that incident and charged for the checkered, with Ferrucci closely in tow. Ferrucci moved to Askew’s right in an attempt to use the aerodynamic draft to sling-shot past Askew at the line. But the two cars collided heavily, blunting their mad dash for the win.

“Coming to the line, I was trying to get really up close to him,” Ferrucci said. “I don’t know why, but I went through him trying to get close to him. Trying to steer closer to him and closer to him because I knew the drag race would be tight. I just didn’t expect the cars to go sideways. That’s my bad, and I’m sorry for doing that to Oliver because that was definitely his race there.”

The collision between Askew and Ferrucci opened a path to glory for the trailing McLaughlin and Daly, and they were more than happy to race through that opening.

“It was quite a day on the Internet today,” Daly said. “It was an electric factory of a race. I think our strategy was awesome and hilarious at the same time because I think we were involved in three different accidents. It was fun. What a day.”

McLaughlin became the second two-time winner in the series, joining Team Penske teammate Simon Pagenaud, who won the previous oval races at Michigan and Twin Ring Motegi. McLaughlin was the only driver to win on a road course and an oval, as his first victory came in Round 2 on April 4 at Barber Motorsports Park.

“I don’t think I could have gotten the W with the car we had on outright pace,” McLaughlin said. “Before that, we had new tires and were on a really good strategy and could have been OK. Once I bent the wing, I was just trying to hold on. I was hoping I got lucky there with some wrecks, and we did.”

The last lap was a mirror of nine final laps of chaos during which unpredictability was the only predictable element.

Pagenaud led the field on the final restart, on lap 61, looking to sweep all three oval races in the series. Graham Rahal, Felix Rosenqvist, Lando Norris and Max Chilton rounded out the top five on the restart, with Askew sixth and McLaughlin seventh.

Rahal drove his No. 15 Honda under Pagenaud’s No. 22 Team Penske Chevrolet for the lead in turn 3 of lap 62, the first full lap after the restart. But Rahal and Pagenaud collided at the exit of turn 1 on lap 63, and Askew wriggled through the mayhem to take the lead, with Norris second, O’Ward third, McLaughlin fourth and Ericsson fifth.

Formula One standout Norris then jumped Askew for the lead later on the same lap, apparently headed for his second straight win in as many starts in the No. 04 Arrow McLaren SP Dallara. But Norris’ dream ended while exiting turn 4 on lap 68, as he hit the rear of Pagenaud’s damaged car that was slowly heading toward pit road for service. Front-row starter Norris ended up 21st after the accident.

That incident elevated Askew to first, O’Ward to second and Ericsson to third, setting the stage for the wildest of the 390 laps of virtual racing contested over six events in this series.

Will Power once again was cruelly denied in his bid to earn a victory despite dominating the series in his No. 12 Team Penske Chevrolet. Power led 21 laps, more than any other driver, but ended up 14th. It was his first finish outside of the top six for Power, who led 95 of the 268 laps contested on ovals in the series.

While the First Responder 175 was the final race in the INDYCAR iRacing Challenge, it kicked off a variety of virtual activities to connect fans to their beloved Month of May at IMS. The two traditional racing pillars of the month have been rescheduled due to the COVID-19 pandemic, with the GMR Grand Prix scheduled for Saturday, July 4 on the IMS road course and the 104th Indianapolis 500 set for Sunday, Aug. 23.

The INDYCAR iRacing Challenge did not crown an overall champion but will add a special element where INDYCAR will make a donation to one of its partner charities.