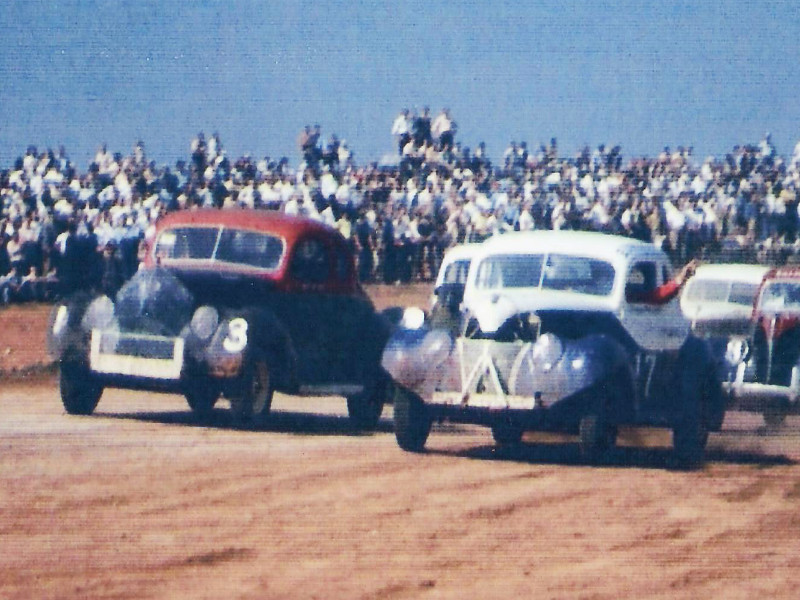 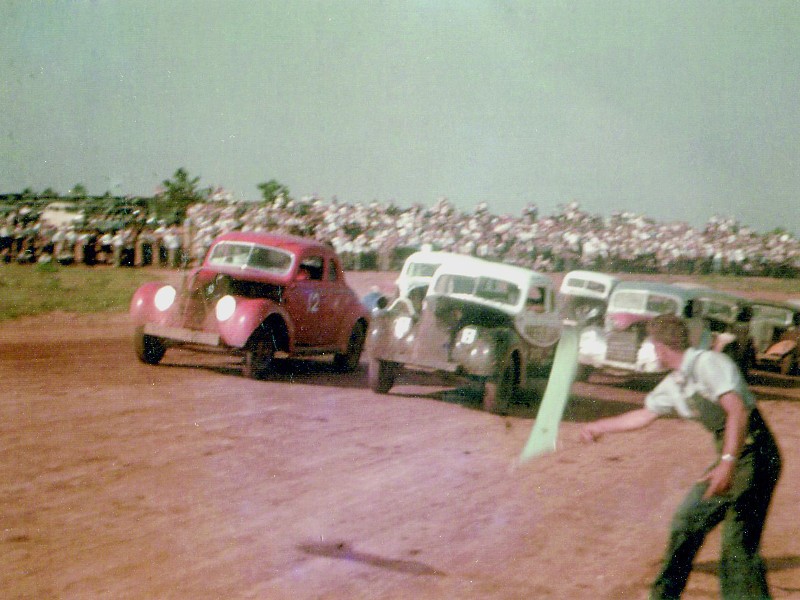 The field takes the green flag for a heat race at Jackson County Speedway on May 16, 1948 near Jefferson, Georgia with a huge crowd on hand. Photo: Courtesy Pritchett Family Collection 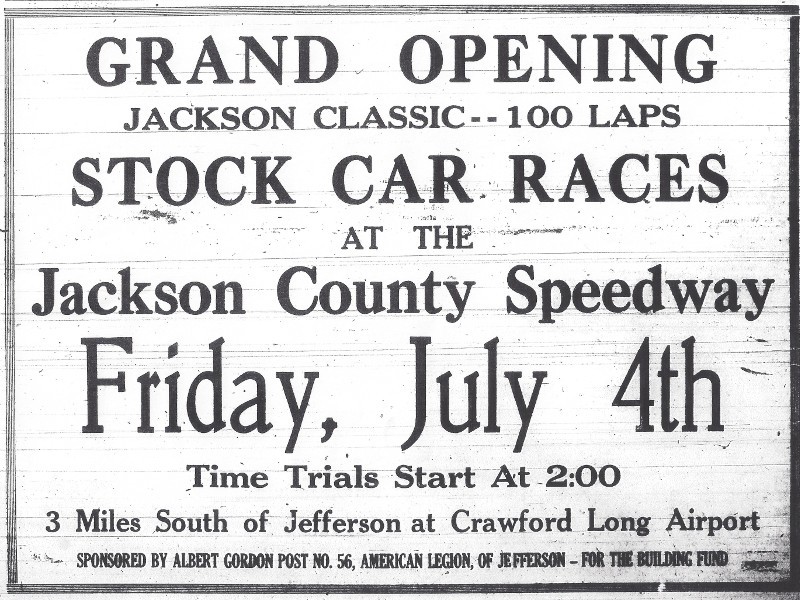 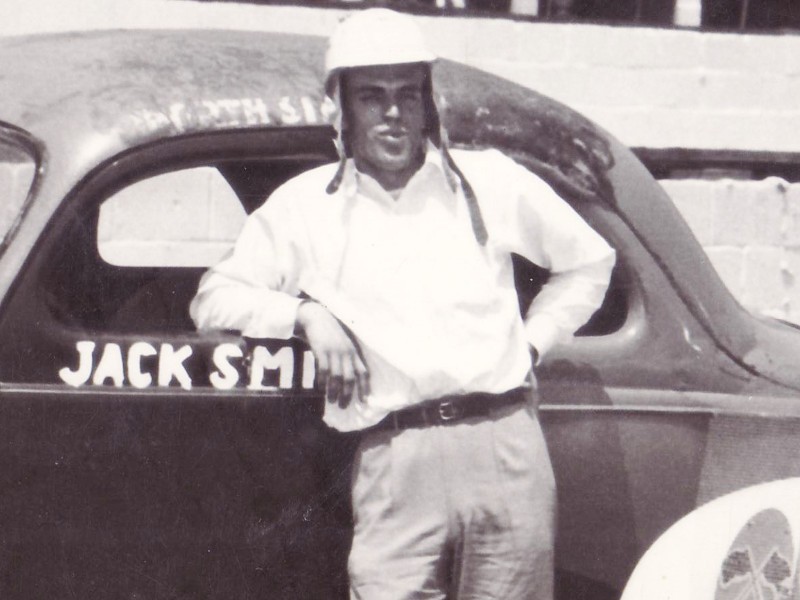 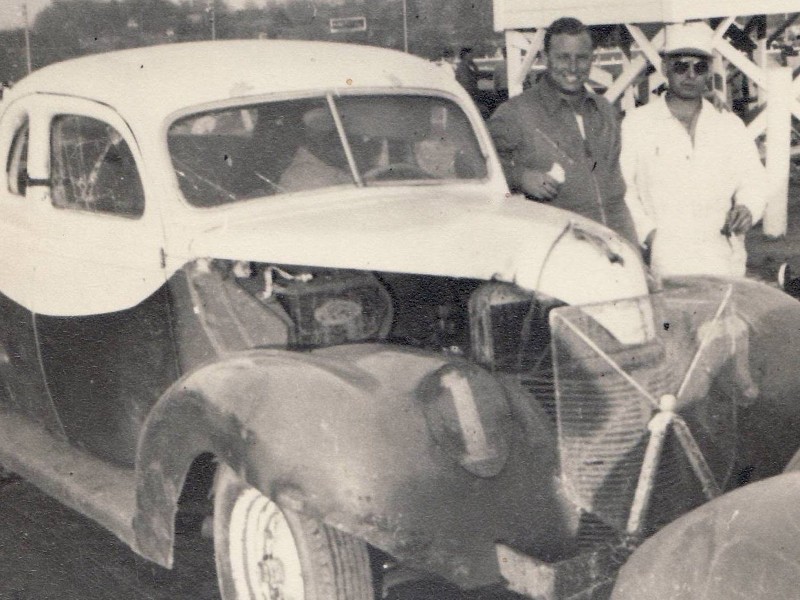 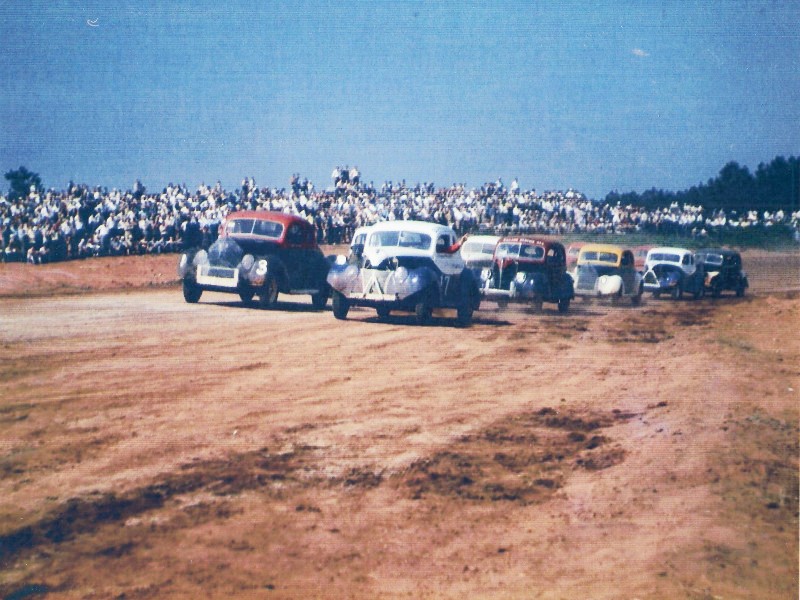 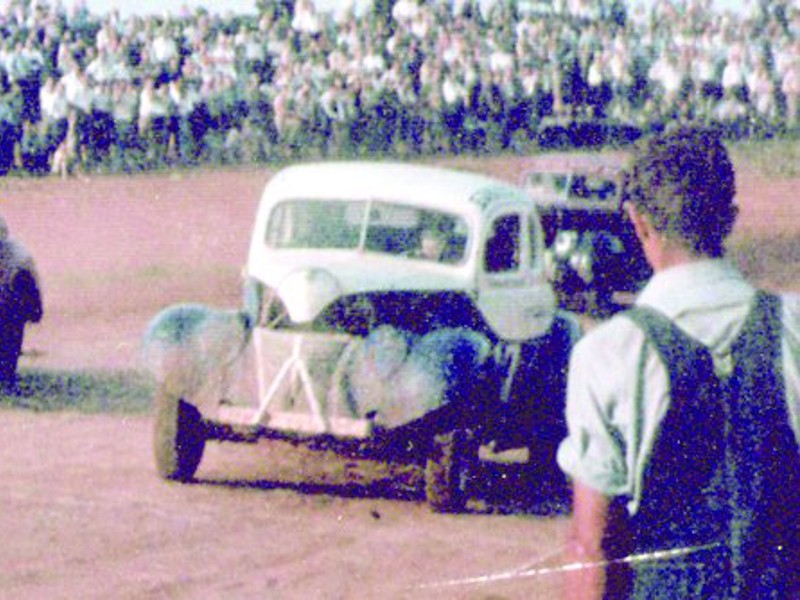 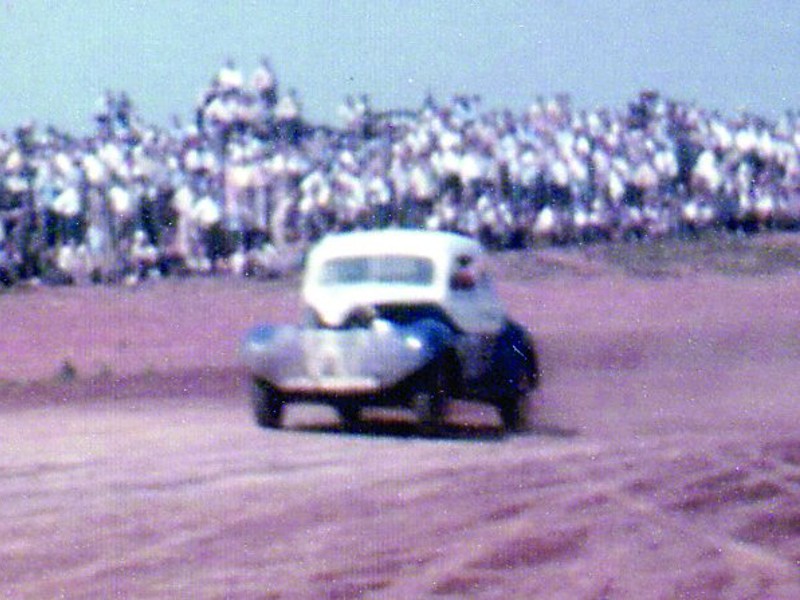 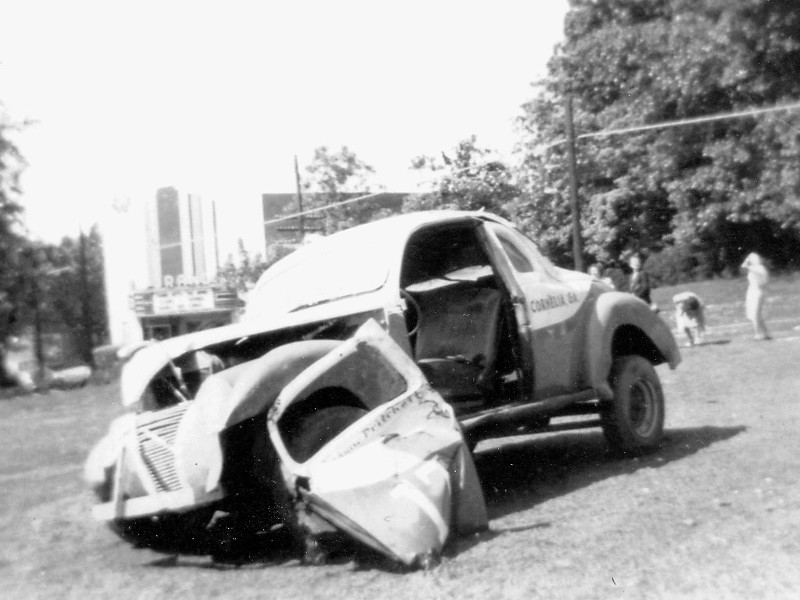 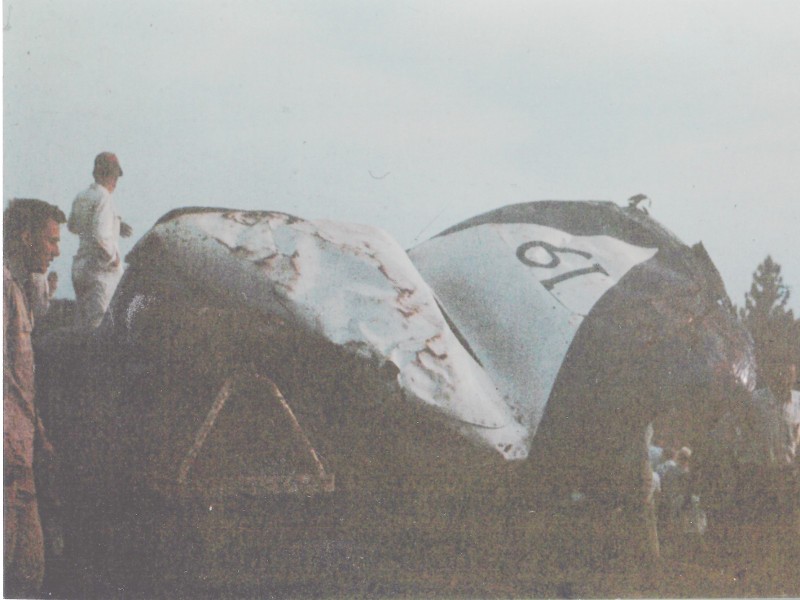 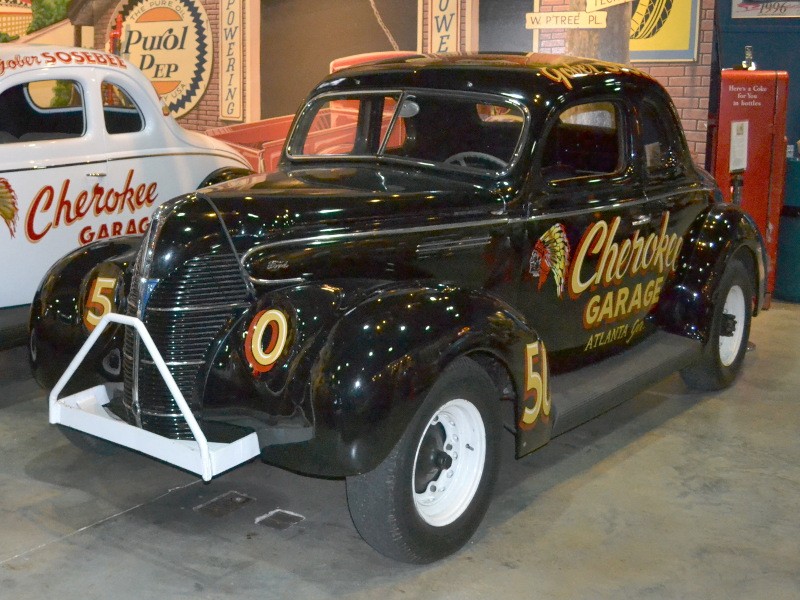 Coming out of World War II, a number of small race tracks popped up around the Southeast.  After years of competing on horse tracks at county fairgrounds, purpose built raceways began springing up as the sport began to grow in popularity.

One of those was located in Northeast Georgia, situated between the tiny hamlets of Jefferson and Arcade, named after its home county – the Jackson County Speedway.

Not to be confused with nearby Gresham Motorsports Park, which was built in 1967, the Jackson County Speedway was the idea of Gainesville, Georgia native Gene Hollis.  Hollis was a member of the first class of graduates to make up the Georgia State Patrol in 1937.  He would remain with the GSP until 1947, when he left the force to become the service manager at the Gainesville Ford Company.

His friendship with the local constabulary would come in handy for his next project.  He and then-Jackson County Sheriff Johnny B. Brooks were looking for a piece of property to bring Stock Car racing to the area.

Hollis settled on the former Civil Air Defense airfield about three miles outside of Jefferson.  Known as the Crawford Long Airport (named after the famed local doctor), the property had been used after the war by a local physician to land his private plane on, and even had an airplane hangar on the property.

Early in 1947, work began on the Jackson County Speedway.

The half-mile, high-banked dirt track was graded by Gainesville construction contractor Dick Law.  While digging out the infield for dirt to build the banked turns, the crew hit a natural spring, resulting in small pond in the middle.  Hollis was happy to have it, comparing it to the lake in the center of Atlanta’s Lakewood Speedway.

The pond gave track workers a place to pull water from to wet the track, also using calcium chloride in an effort to reduce dust during the races.

“It was only the second purposely built track for automobile racing in Georgia after World War II,” said racing historian Mike Bell. “All the other tracks available in Georgia were horse-auto tracks - mostly horse.”

The speedway opened on July 4, 1947, but it wasn’t the only holiday racing program in the region.

“They picked a day to open when several other tracks were running,” Bell said. “The Gainesville Fairgrounds track was running a race, as was the New Atlanta Speedway in Jonesboro and Greenville-Pickens Speedway in Easley, South Carolina.  So cars were spread pretty thin.”

“It probably hurt the crowd but not the car count,” he said. “But all the races mentioned had good crowds, so much so that they continued with their programs. There was no TV in those days. People nowadays do not comprehend that.”

Jefferson native Tommy Roberts took the victory in that first race - a 100-lap event billed as the “Jackson Classic” - with Harold Garrett from Athens, Georgia in second.

One story that still makes the rounds was about the day that both drivers decided to do a ride-along during a practice, resulting in a heavily damaged car and almost injuring Crumley.  While shaking down a Hollis-owned 1939 Ford Modified, something went wrong, sending the car tumbling.  While Roberts was behind the wheel and strapped in with a seatbelt, Crumley was just hanging onto the roll bar when the crash occurred.  Crumley would emerge with bumps and bruises, but was ready to go race at Macon the next week.

Gainesville native Bobbie Whitmire started out as a spectator at the speedway, and would later compete there.

“It was a good track,” said Whitmire.  “It as a half-mile, medium banked  track.  It was a pretty fast track.  The dust wasn’t too bad.  I drove on dustier.”

Whitmire remembers racing against a unique car at Jackson County.

“I ran one or two races down there.  When I raced there, Jack Ingram won driving a 1946 Mercury. The car was brand new, but it had burned in a fire in the showroom, and they made a race car out of it.  Ingram drove it to the win, and I ran second to him.”

Things took a nasty turn for the Jackson County Speedway on August 3, 1947.

It occurred as Atlanta’s Jack Smith had to take evasive action to avoid the car of Gainesville’s Walt Gibbs, which had overturned in turn three.  Smith’s car went out of control, went up the embankment out of turn four in front of the grandstands.

“They didn't have any fences and a very shallow bank (along the frontstretch),” said Whitmire, who was among the crowd that afternoon.  Those safety innovations were years away at many small tracks.

“When Jack, he got out of his car, looked back and just fell down squalling,” said Whitmire. “He hit (Nalley) pretty hard.  It bent his left front fender.”

Nalley was taken to an area hospital, where he passed away two days later.

Racing would return to Jackson County Speedway just a few weeks later, with Hollis and his track officials working hard to end the season on a high note.

“Spectator safely was not a big concern of promoters in the early days,” said Bell. “It took a tragic accident at Yellow River Drag Strip in Covington, Georgia in 1969 to finally get the state involved. Other states had already made specifications for the safety of the fans. Only by the grace of God were there not more people killed at races.”

During the off-season, Hollis’ friend, Bill France, Sr., was working to organize a national Stock Car sanctioning body. When NASCAR was formed at the beginning of 1948, and with France having attended several events at the track, it seemed likely a trip to the Jackson County Speedway by the series would happen.

But trouble would continue to follow the speedway in 1948, leading up to a tragic day that took the life of a popular local driver.

Swayne Pritchett, from nearby Baldwin, Georgia, had been getting the attention of France, Sr. and others on the racing scene.  Pritchett was among the first 20 people to obtain a license form NASCAR, and had turned in strong finishes on the Daytona Beach and Road Course.  He also scored wins around the Southeast, and was used in advertisements promoting NASCAR events in early 1948.

Pritchett had scored a top five finish in the season opener at Daytona Beach, followed with a third-place finish at Hayloft Speedway in Augusta, Georgia and a pole at North Carolina's North Wilkesboro Speedway.

On Sunday, May 16, 1948, Pritchett had passed on making a trip to compete in a NASCAR race at Virginia’s Richmond Raceway in favor of racing closer to home.  With an estimated 6,000 race fans in attendance, Pritchett dominated the day at the Jackson County Speedway.

He started by setting fast time in qualifying, followed by a heat race win and a win in the trophy dash.  His blue and white No. 17 Ford appeared to be untouchable.

When it came time for the feature, Pritchett powered away from the field, leading every lap en route to the win.  The crowd went wild as the local hero took the checkered flag for the win.

Seconds after crossing the finish line, it all went wrong.

As he traveled into the first turn after taking the win, Pritchett’s car collided at speed with the lap car of Truett Black of Cornelia, Georgia.  The impact sent Pritchett’s Ford tumbling end over end, with Pritchett being thrown from the car as it rolled over.

“(Pritchett) hit him so hard, the body came off of Black's car,” said Whitmire, who was in attendance that day.

Black was taken to an Athens area hospital, and would survive his injuries.

Pritchett was rushed to the nearby Commerce Hospital.  He would succumb to his injuries a few hours later.

The next race at the Jackson County Speedway would be held in Pritchett’s honor.  While not a NASCAR sanctioned race, several of Pritchett’s fellow NASCAR competitors were in attendance, with Dawsonville, Georgia’s Gober Sosebee taking the win.

The prize money was donated to Pritchett’s family after the race.  The winning car sits today on display in the Georgia Racing Hall of Fame in Dawsonville, where Sosebee and Pritchett are both honored as inductees.

Things would not get any better for the speedway over the closing months of 1948.

First there was another bad crash at the half-mile track during a race for the Atlanta Stock Car Club, an African-American racing league, on October 18.  Driver Otis Pruitt, piloting a car for Hollis, was severely injured in the lap 13 accident.  He never fully recovered from his injuries, and passed away as a result a couple of years later.

In addition, the family of Harley Nalley filed a wrongful death suit against the track and Hollis.  When they were awarded a $10,000 judgment, it meant was the end of Hollis as a race track owner.  And it spelled doom for the Jackson County Speedway.

Another factor was the effect the two deaths in two years at the track had on the crowd turnout.

“People wanted spills and thrills,” said Bell. “But not mayhem and death.”

There are some who insist the track continued to hold races until 1951, but no evidence of that has been located yet.  But from that point on, the track was left to languish in the weeds.

The track was still recognizable for many years, as former racers and historians would occasionally visit.  A portion of the property was used to grow vegetables for Atlanta area restaurants.

In 2005, the Damon Gause Bypass took U.S. 129 straight across the front and backstretch of the old speedway.  Within the last few years, a portable building manufacturer has put a building up on top of the third and fourth turns.  The first and second turns still remain, overgrown, on the other side of the bypass.

While little physically remains of the Jackson County Speedway, the hope by local racing historians is to eventually put a state marker on the spot.  What better way to commemorate the track, and those who lost their lives there.