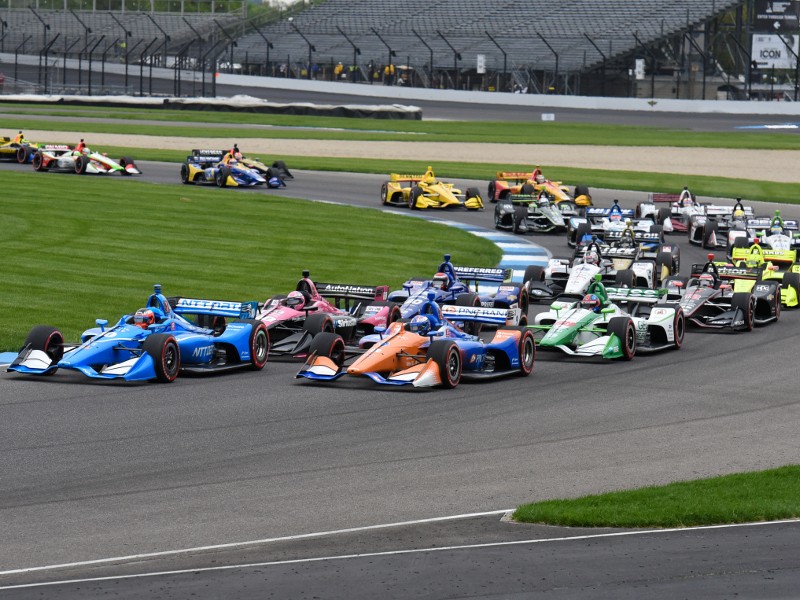 The field lines up to take the green for last year's IndyCar Grand Prix on the Indianapolis Motor Speedway infield road course. The NTT IndyCar Series is scheduled to race twice on the road course this year with the addition of the IndyCar Harvest GP on October 3. Photo by James Black
Contact Editor

The stars of the NTT INDYCAR SERIES will return to the Indianapolis Motor Speedway for a third racing event in 2020. The INDYCAR Harvest GP will take place Saturday afternoon, October 3 on the IMS road course.

The new event was unveiled Monday as part of INDYCAR’s updated 2020 schedule announcement. The GMR Grand Prix remains on the IMS schedule for Saturday, July 4, setting the stage for a history-making INDYCAR and NASCAR pairing over the Brickyard 400 weekend.

The 104th Running of the Indianapolis will take place Sunday, August 23.

The INDYCAR Harvest GP joins a busy weekend of racing at IMS, with the previously announced Indianapolis 8 Hour beginning at 10 a.m. (ET) Sunday, October 4. The event will feature the first-ever combination of the Intercontinental GT Challenge with its North American counterpart, GT World Challenge America.

“INDYCAR in October at IMS might bring slightly cooler weather but will definitely be warmly embraced by our fans,” IMS President J. Douglas Boles said. “Paired with the Indianapolis 8 Hour, we’re set for a can’t-miss fall weekend of motorsports at The Racing Capital of the World. We appreciate everyone’s support and flexibility as we continue to navigate calendar adjustments caused by the COVID-19 situation and extend our thanks to the GT World Challenge for embracing this new weekend schedule.”

The INDYCAR Harvest GP will pay tribute to a storied IMS event, the “Harvest Classic” held in September 1916. The Harvest Classic was the only racing event held outside of May at IMS from 1911 through 1993. The event featured three races, all won by legendary driver Johnny Aitken.

With the Indianapolis 8 Hour included in the 2020 GT World Challenge America schedule, this will be the series’ first long-distance endurance race that will count toward the championship in recent decades. The weekend will also showcase drivers in SRO America’s Pirelli GT4 America, GT Sports Club America and the TC America series will crown its champions as they cross the world-famous Yard of Bricks start-finish line over the race weekend.

“Sharing Intercontinental GT Challenge’s Indianapolis debut with one of America’s biggest sports categories is a real privilege for everyone at SRO,” said Stephane Ratel, founder and CEO of SRO Motorsports Group. “INDYCAR, as well as its cast of world-class drivers and teams, requires no introduction. It also completes a blockbuster weekend at the Brickyard featuring the best of GTs, touring cars and open-wheelers.”