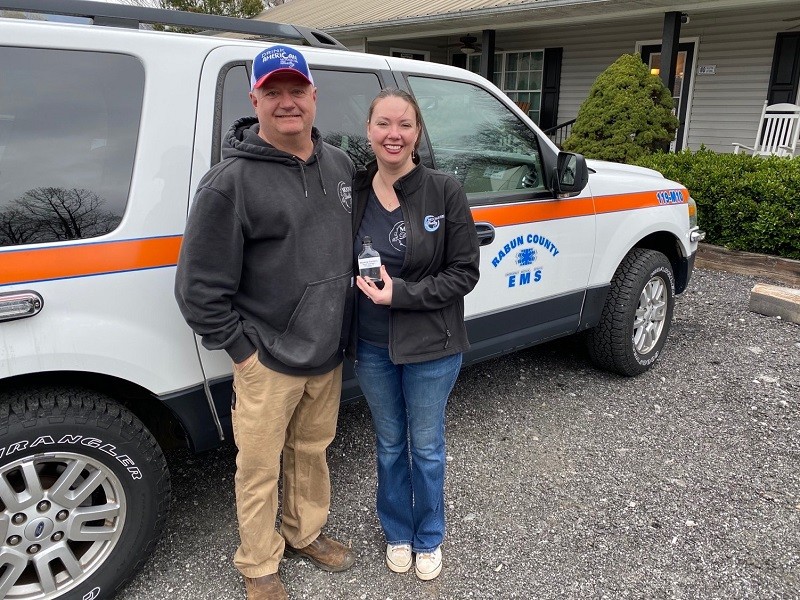 Doug and Jen Nasser of Moonrise Distillery in Clayton are donating sanitizer made by the facility to public safety personnel in Rabun County. 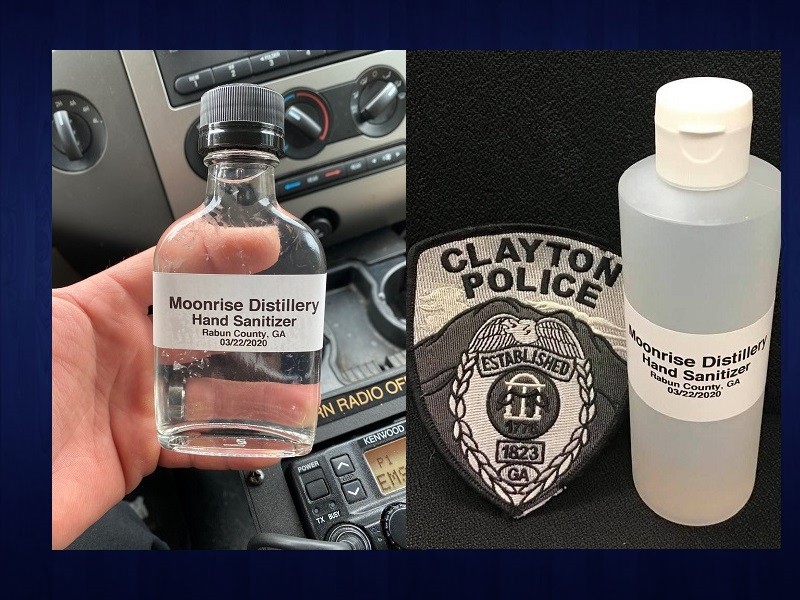 Rabun County emergency responders have restocked their supplies of hand sanitizer, thanks to the work of a local distillery.

Moonrise Distillery in Clayton, a family-run operation, has switched its focus to producing large batches of hand sanitizer to be used by emergency responders and healthcare personnel in response to the current response to the coronavirus.

Stancil said having the distillery produce hand sanitizer in the county is a blessing to all public safety agencies, for whom the product is reserved right now. Rabun County EMS did offer to pay for the sanitizer but was turned down.

“This is a family-run operation, and as family we think this community is family,” said Doug Nasser of Moonrise Distillery. “You don’t benefit financially off of your family when things need to be done. We just decided that’s the way it’s going to be.”

Public safety holds a special place in Nasser’s heart. He is a former emergency medical technician and paramedic.

“I was heading down that track, spent a lot of years in the emergency medicine area, so I’ve got a very big soft spot for people that dedicate their time and risk their lives to help others,” Nasser said.

“We’ve been working day and night since Thursday the 12th and just producing as much of this as possible,” Nasser said. “What we prioritize is EMS, police, fire and then healthcare on who we’re going to dedicate this to, but also make sure that we’re producing enough and kind of rationing it a little bit to make sure that everybody that walks in in the community can get at least a bottle. We’re working with Piedmont Healthcare and some other folks on the larger healthcare side within Georgia to make sure they’re taken care of also.”

As a family distillery, Moonrise can produce more than 600 gallons of sanitizer per day. The father/son distilling operation takes all its ingredients possible from Rabun County.

“So, we don’t have the supply chain limitations,” Nasser said. “I’m proud of some of the other distilleries that are stepping up also to support their community, but they’ve got issues. Here, we make all our own alcohol, so we don’t source it from anybody else, which means when we need more, we just make it – stay up a little later and make it.”

In fact, the grain contained in the alcohol used in the sanitizer is a product of the Nasser family’s farm.

“We just got another almost 10,000 pounds of grain in from our farm, so we’re running around the clock to just produce more, and the product that we’re using isn’t some mass-produced ethanol from some plant,” Nasser said. “It’s actually heirloom white Silver Queen corn that we’re turning into our botanical gin with botanicals from the area, and those botanicals are what really make this less aggressive on your body. Ours is all natural.”

Nasser said the hydrogen peroxide or glycerin used in some companies’ sanitizer products are not included in the Moonrise sanitizer.

“We’re trying to do two things,” Nasser said. “We’re trying to solve a problem, but we’re also trying to look bigger picture to make sure there’s no unintended consequences to how we’re going about solving this problem.”

“We feel really blessed that this community, even though we’re not from here, they welcomed us and made us feel at home, and they supported our business, so come hell or high water we’re going to return that,” Nasser said.

People all over the nation are contacting Moonrise Distillery asking to buy some of the sanitizer produced, but the Nasser family feels strongly it should be used at home and in Georgia.

“We’ve got people all over the country – I mean I’ve even got the police department from Juneau, Alaska, folks from Washington state, everybody and their brother – asking us to ship this stuff and offering to pay for it,” Nasser said. “We just don’t feel right taking product that we can make to support this area and selling it off and shipping it off outside the community for profit. It just doesn’t seem appropriate, so that’s why we’re not doing it.”

Instead, the Nassers are focusing their output on Rabun County first, then surrounding areas.

But Nasser is quick not to take all the credit for the project, saying it’s been a true community effort to address a need.

Nasser said the teamwork, determination and community spirit of Rabun County make it the most special place he’s been.

“I’ve had the opportunity to lead big companies on six continents for 30-plus years, and there’s a reason they’re going to take me out of this town in a box, and that’s because the people here are just that special,” Nasser said. “They get it. It doesn’t matter where they work every day or the size of their family, when push comes to shove, they’re out there supporting each other. That’s the story.”

After members of Nasser’s family began going to a big box store for a particular ingredient for the sanitizer, community participation grew.

“The manager at Walmart got wind of what we were doing and saw that we kept coming in to buy fresh aloe and just said, ‘No, we’re going to donate that’,” Nasser said. “That’s pretty cool.”

One batch size produced is 90 gallons and another is 150 gallons, and both sizes fill quite a few bottles.

“The thing everybody’s got to continue to understand is that the No. 1 solution to this is washing your hands for 20 seconds with soap and water,” Nasser said. “But when you can’t do that, that’s what this contact sanitizer is for. So, you get a 6- to 8-ounce bottle where you can just kind of spritz it on there and it will probably last you two weeks.”

Because of the alcohol concentration of the sanitizer, it is effective at killing any harmful germs or bacteria on hands.

When the coronavirus outbreak started, Rabun County EMS already had a supply of many of the needed items. That’s because the agency prepared for another virus outbreak that didn’t happen a few years ago, so those items were not used.

“Thankfully, because of our preparation for the Ebola virus several years ago, we had actually stocked up on a lot of items – personal protective equipment, hand sanitizers and things like that,” Stancil said. “So, through the leadership of [EMS Director Mike Carnes], we had been able to stock up on some things in preparation for the Ebola, which thankfully never really materialized for us.”

Still, that doesn’t mean the supplies on hand will last indefinitely. That’s why donations like the ones from Moonrise Distillery are so important to help the agency restock its supply – especially when supply chains are lagging, Stancil said.

“We sure do appreciate it,” Stancil said. “It’s made a big difference for us. Hopefully when this thing blows over, his business will thrive, and people will be appreciative of him and for his business.”