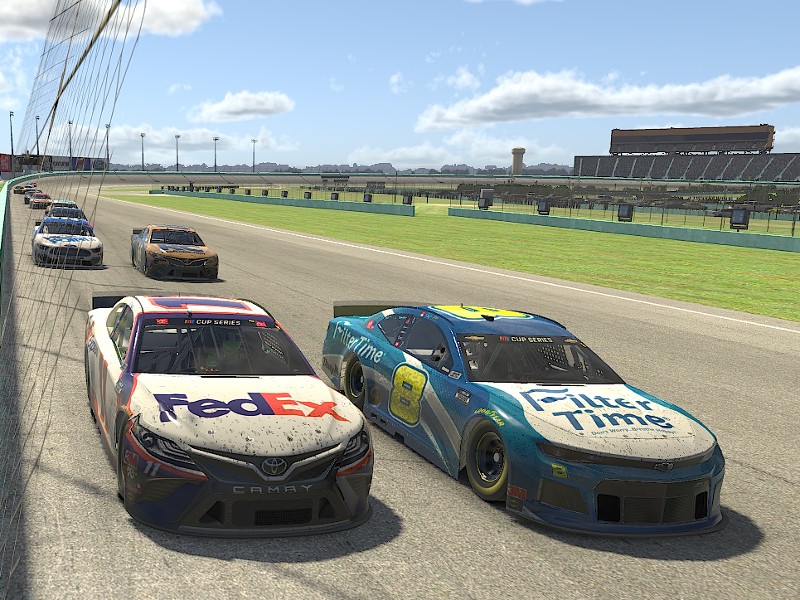 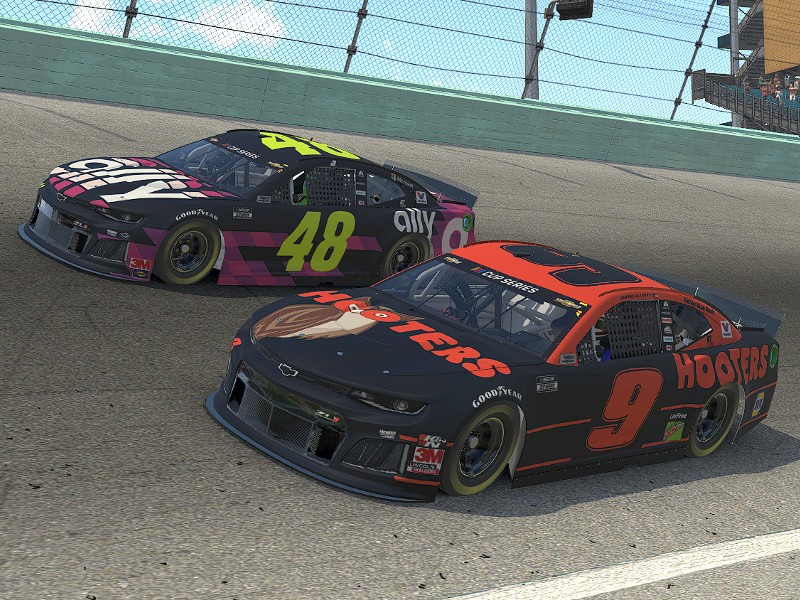 No matter if it’s in real life or on a simulator, Denny Hamlin knows how to win a race.

Hamlin marched through the field from 14th on the final restart of Sunday’s inaugural eNASCAR iRacing Pro Invitational Series race at virtual Homestead-Miami Speedway to take the lead in the last half lap of the Dixie Vodka 150.

He didn’t just win it, he bested Dale Earnhardt, Jr. – one of the most seasoned sim racing veterans in the field – with an outside pass going into the third turn to do it.

Earnhardt, Jr. powered back to the inside coming off turn four, but the two made contact coming down the stretch, allowing Hamlin to beat him to the finish line for the win.

Hamlin said he’d pull the same move in a real race to win.

“I wanted the bottom, and he was really, really smart to – I mean, he didn’t win, but he was smart to kind of block the bottom there because the bottom lane at Homestead on iRacing just has tremendous more grip than what the lane I was running in, but I knew that the difference in the two lanes was about a tenth and a half to two tenths, and I thought my tires were about three tenths better. So I thought as long as I got beside him, I was going to be able to complete it, even though he was in the preferred groove.

“It was a risky call. I don’t know what we were, 18 laps to go or so and we decided to pit from third, and I didn’t see anyone really come in behind me, so I just – I was nervous. Restarting where I was, I thought I was going to get in a wreck or not make it back up there, but certainly would have done it the same exact way in real life.”

The event, organized by NASCAR during the sports shutdown during the COVID-19 crisis, saw top drivers from the NASCAR Cup, Xfinity and Gander Outdoors Truck Series take part, and was carried live on Fox Sports 1.

“It’s always fun when you win, but regardless, I mean, it’s just – it was a great event,” said Hamlin. “For the community, the racing community, the NASCAR drivers to come together and put 20-something drivers on the racetrack with such short notice, everyone is buying up simulation rigs this week and last week getting ready for the event, and for it all to come together and have a great finish, I think it was definitely a success.”

Hamlin led early on, but lost track position with the decision to make a pit stop under caution on lap 29. That put him back in the pack where he was involved in a multi-car crash on lap 38, triggered when Chase Briscoe and Kurt Busch tangled on the backstretch, gathering up several other cars.

With drivers allowed two “resets” to repair damage during the 150 lap race, Hamlin was able to resume, but had to make up track position.

Hamlin again worked his way up into contention, and was running with the leaders when the final caution flew on lap 77 when Clint Bowyer spun in turn one.

Hamlin made the decision to pit, rejoining the field in 14th, the first car with fresh tires.

Up front, it was Peachtree City, Georgia’s Garrett Smithley powered to the point, with Timmy Hill and Parker Kligerman in pursuit.

Behind them, Earnhardt, Jr. began to close. With 13 laps to go, he moved into the top three, and set his sights on the leaders. Four laps later, Hill powered to the lead, with Earnhardt, Jr. in tow.

As the leaders battled, Hamlin was slicing his way through the field, and began to reel in the lead pack.

Behind the lead battle, Hamlin and Briscoe fought for third. With two laps to go, Hamlin followed Earnhardt, Jr. as the two moved to the top two spots.

On the final lap, Hamlin drove to the outside of Earnhardt, Jr. for the lead. The duo battled side-by-side through turn three and down the backstretch, with Hamlin finally moving to the lead in turn three.

Earnhardt, Jr. drove hard to the inside coming off turn four, but the two touched, with Earnhardt’s car almost getting away from him. That allowed Hamlin to scoot away to the victory.

Earnhardt, Jr. finished in second, with Hill in third, Briscoe in fourth and Smithley in fifth.