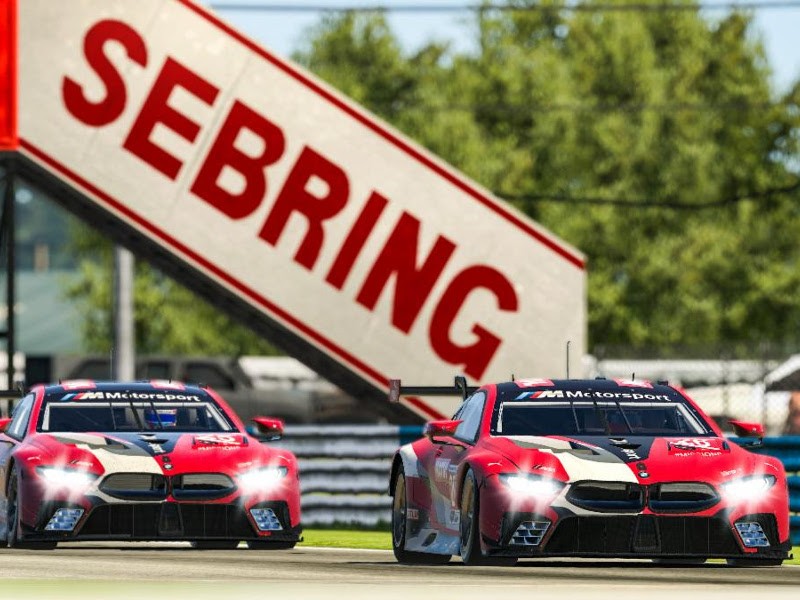 When BMW Motorsport unveiled its plans for IMSA Sebring SuperSaturday on Friday morning, one point was crystal clear: the German manufacturer was taking the iRacing event seriously.

It came as no surprise, then, that three of the manufacturer’s entries swept the top three positions in the 90-minute race on the virtual, 3.74-mile Sebring International Raceway, led by Canadian racer Bruno Spengler in the Motul-sponsored No. 25 BMW Team Red M8 GTE.

Spengler, who is embarking on his first full IMSA WeatherTech SportsCar Championship season this year in the GT Le Mans (GTLM) class, took the lead from teammate Nicky Catsburg in the No. 26 BMW in turn 7 five minutes into the race and stayed out front the rest of the way. He crossed the stripe 3.172 seconds ahead of Catsburg’s similarly liveried No. 26 machine to get the victory.

“It’s very special, because starting the race event, you feel the pressure building up,” Spengler said. “Between qualifying and the start, I was nervous! It’s definitely real racing. I was sweating a lot. Nicky was pushing a lot.

“We have to underline the fact IMSA organized this event with so many incredible cars and drivers at Sebring. It’s safer for everyone to stay home and do the best we can to entertain and still race. Thanks to all involved for setting this up. Passing start/finish, I had goosebumps. I was almost screaming on the radio!

“But I had my dog and wife sitting next to me as I was racing. Normally they are far away. Thanks to BMW and everyone involved.”

Catsburg claimed the lead on the opening lap from yet another BMW – the No. 96 Turner Motorsport machine qualified on pole by Robby Foley – and it became immediately clear that the pair of red BMWs were joining forces to pull away. And that they did, quickly building a healthy margin over the rest of the field.

Catsburg made a slight bobble going into turn 7, which was all Spengler needed to grab the lead. But neither one of the BMW Team Red cars put a wheel wrong the rest of the way.

“I had a couple days of practice with Bruno and Jesse,” Catsburg said. “BMW has been upping its game when it comes to sim racing. It’s so cool to come back with a 1-2-3. To give you a sense how big this was, I just got a message from Jens Marquardt, who is the BMW motorsports director. He was watching. It shows the importance of this event. Maybe it is helping us – and I really enjoyed it.”

Third place went to the third factory BMW in the field, the No. 24 BMW Team Black M8 GTE driven by 2020 Rolex 24 At Daytona winner Jesse Krohn.

Krohn took third place from Sage Karam in the No. 8 Porsche 911 RSR with just over an hour remaining and preserved the BMW podium sweep, finishing 11.746 seconds behind the winner.

“Today I couldn’t match the pace of Bruno and Nicky,” Krohn said. “I pushed as hard as I could. By the time I found some pace it was too little, too late. It was a great experience. It was good to have this on the mind given what else is happening in the world. This has been good for IMSA fans, the feedback has been super good.”

Karam – a highly rated competitor on iRacing and former Lexus RC F GT3 driver in the WeatherTech Championship – wound up fourth in the No. 9, finishing 36.659 seconds behind the winner. Mirko Bortolotti, a 2019 GTD class winner at both the Rolex 24 At Daytona and Mobil 1 Twelve Hours of Sebring Presented by Advance Auto Parts, came home fifth in the No. 888 Porsche.

Foley was the only other driver to lead the race, which he did for the first three corners, but an opening-lap incident removed him from contention.