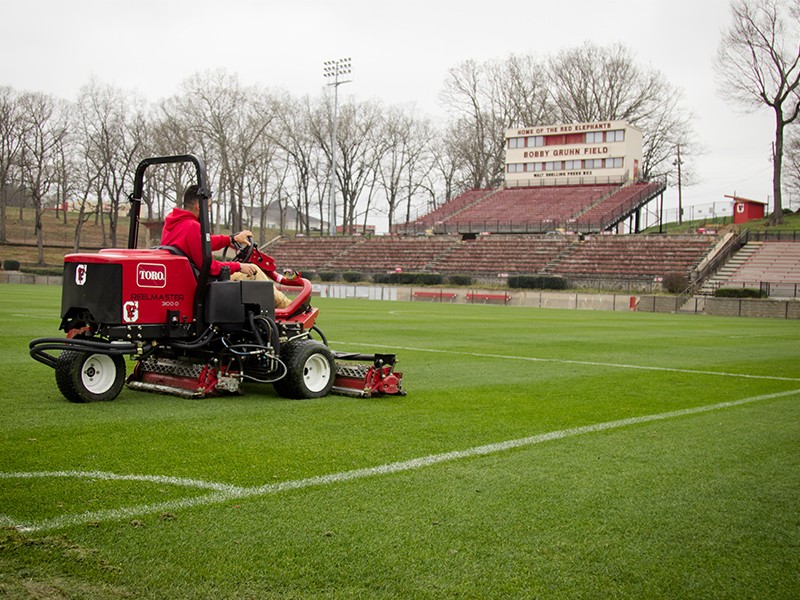 Carmen Diaz cuts the grass at City Park Stadium as part of his duties to keep the field ready to go in a moment's notice in case the 2019-20 prep season resumes.
Photo/Seth Chapman
Contact Editor

GAINESVILLE — You know him when you see him, or one of the crew members, but you probably don't know any of their names.

They’re usually riding a lawnmower, or wielding an electric edger, or garden shears, or any of a plethora of landscaping tools. Or maybe they’re just manning a simple water hose.

Both venues almost always give off the sense, and scent, that all is right with the world as you settle in for an afternoon of sports. However, both, along with the system’s other venues -- the girls on-campus softball field, the high school practice fields, the Gainesville middle school baseball and softball fields -- all now sit eerily vacant after high school sports were postponed by the Georgia High School Association at least through March 31 due to the coronavirus outbreak. Many expect it to be extended deep into April and possibly forcing the cancellation of the rest of the prep season altogether.

But that has not stopped Presnell and crew from continuing to maintain the facilities in an effort to be ready at a moment's notice.

“We're trying to keep them at a game ready state. I have asked the guys to plan for all scenarios and be flexible for whatever decision is made,” Presnell said this past week.

Usually this time of year every system venue is abuzz with kids maintaining practice schedules or preparing for games. City Park in general, with a soccer or lacrosse game virtually every day, is always a challenge to keep pristine and safe. A drive-by of any of them now will only display a near-perfectly manicured field.

Much like the athletes, Presnell and his group strive for perfection when it comes to showing off their work. It’s no wonder many in the area call them the hardest working group in sports.

“The key to a great looking field on game-day is by staying on a consistent schedule. It’s really a year-long process in turf management. There’s so much work that goes into fields that is done behind the scenes and unnoticed.”

But no one knows what the immediate future will bring. Presnell’s challenge is trying to predict an unknown future. It also has put future projects on hold.

“We were stopped mid-schedule in all sports so we don’t know if we will come back in two weeks, after spring break, or at all,” he said. “We won’t be the ones deciding things but we'll be ready to go in whatever direction needed. We are also making preparations if we're sent home for a certain amount of time.

“We’re working on some smaller (projects) but we really can’t do any big projects until we know what direction we're going,” he said. “I would love to get an early start on our summer projects but will have to wait and see what happens.”