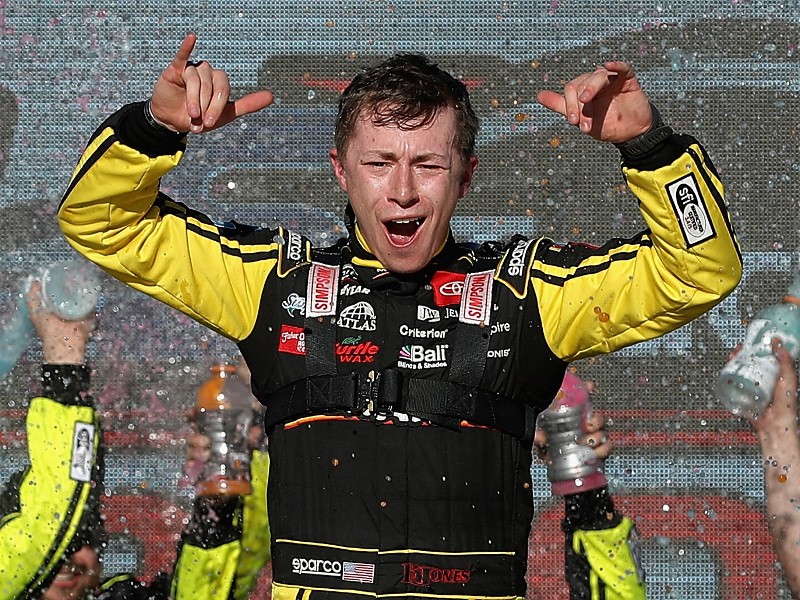 Buoyed by a strong run through turns 3 and 4, the Atlanta, Georgia native shot past Busch into the lead on the frontstretch on lap 181 and pulled away to win by 3.556 seconds over Joe Gibbs Racing teammate Harrison Burton, who passed Busch on lap 190 for the runner-up position.

Next weekend at Atlanta, there will be a $100,000 bounty on Busch in the Gander RV & Outdoors Truck Series race, courtesy of NASCAR cup veteran Kevin Harvick and Marcus Lemonis, chairman and CEO of Camping World.

On Saturday, Jones had to be content with the satisfaction of beating the career leader in NASCAR Xfinity Series victories, who rolled home third without adding to his 96 wins in the series. Jones was happy to settle for the trip to Victory Lane — after beating Busch and fellow NASCAR Cup Series champion Brad Keselowski, who ran fourth.

“These are two of arguably the best in the business,” Jones said. “We just had a car to beat ‘em today. These guys just did an incredible job.”

Crucial to the win was a quick pit stop on lap 130 that got Jones second off pit road and fourth in the running order for a restart on lap 134.

“I told (crew chief) Jeff (Meendering) kind of early in the race… I’m like ‘Man, I’m just lacking track position — that’s the only thing I’m lacking. The pit crew did a heck of a job, and they said, ‘There you go. There’s your track position, and it paid off at the end.”

The 1-2-3 finish for JGR was the sixth in company history. More importantly, Jones’ second victory in the series and first at Phoenix was the 500th win for Toyota in NASCAR’s top three national series combined.

Burton’s No. 20 Toyota improved throughout the afternoon, as the 19-year-old driver — fresh from his maiden win at Auto Club Speedway last week — posted his fourth straight top-five finish to start the season.

“Early in the day, we weren’t good enough at all,” Burton said. “We were running ninth, 10th, somewhere back there. We fought really hard and got a lot better by the end. The 19 (Jones) kind of did the same thing.

Keselowski recovered from an off-sequence pit stop and a brush with the outside wall to finish fourth, followed by Xfinity regulars Justin Haley, Chase Briscoe, Noah Gragson, Austin Cindric, Ross Chastain (who overcame a power-steering issue that put him a lap down) and Riley Herbst.

Star-crossed Justin Allgaier had perhaps the fastest car in the race, but the driver of the No. 7 JR Motorsports Chevrolet was trapped in a pit stop zugzwang after staying on the track under caution early in Stage 3. Subsequently, Allgaier pitted for fuel only under the sixth yellow on lap 139, but he failed to get a timely caution late in the race that would have allowed him to use his final set of new tires.

Notes: Busch led a race-high 78 laps… Gragson won Stage 2 and led 27 laps… Jones was fourth in laps led with 24… All told there were 12 lead changes among seven drivers… There were seven cautions for 45 laps, the last coming on lap 143.