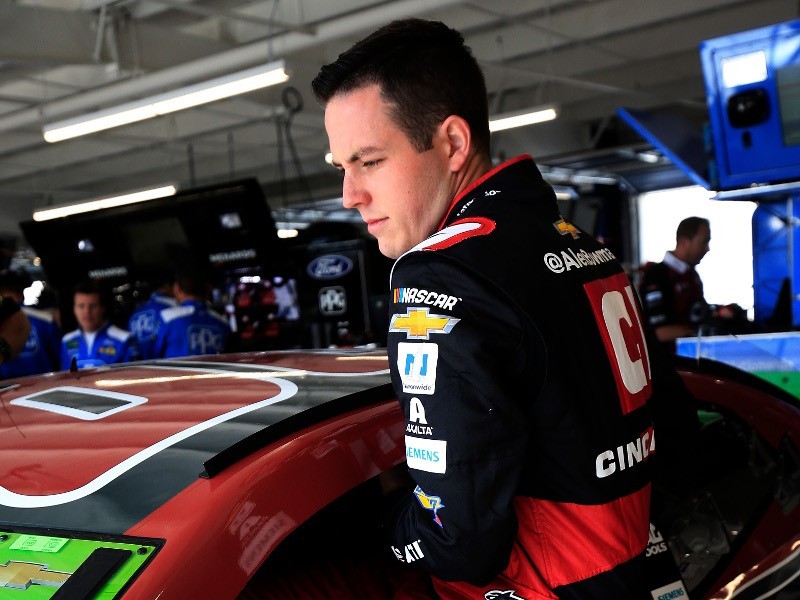 Alex Bowman has the timing down and the impact up.

The California win was an important and emotional victory for the Tucson native. Bowman, who is in the last year of his contract driving the No. 88 Chevrolet for Hendrick Motorsports. An early season win never hurts in a contract year. And Bowman would really like to add a few more on his way to contending for the 2020 series crown.

He’s got plenty of reason to feel optimistic about the race this week. In his first Phoenix try for the Hendrick team – in 2016 driving the No. 88 for the injured Dale Earnhardt, Jr. – an inspired Bowman earned the pole position and led 194 laps, finishing sixth. The effort was a big reason why the championship team tabbed Bowman to take the seat when Earnhardt decided to step away from fulltime competition.

Since being hired to drive the car in 2018, Bowman has qualified for the NASCAR Cup Series Playoffs twice and last year earned his first career victory at Chicagoland Speedway. He finished a career-best 12th in the 2019 Playoffs and scored career-high marks in top fives (seven) and top 10s (12).

With the victory at Auto Club Speedway last week – and his Playoff berth already secured less than a month into the season – Bowman is ranked third in the NASCAR Cup Series standings. It’s his best ever start to a season and bodes well for his future – in the near-term and perhaps, beyond.

“Every year is a contract year,” Bowman acknowledged following his win last week in Fontana, California. “Every year of my life in the Cup Series has been a contract year. I’ve had contracts and two weeks before Daytona read a Tweet that said I’m not going to Daytona. There’s never a situation that I feel completely comfortable in.

“I feel like if somebody doesn’t want you driving their race cars, you’re not going to be there driving it. I’m as motivated as ever, doing everything I can to try to be the best on and off the racetrack as I can be. Hendrick Motorsports is where I want to be. It’s where I want to stay for the rest of my career.

In fact, Bowman’s effort Sunday is more widely indicative of the hard work turned in by the whole team. Hendrick Motorsports is unquestionably off to one of its strongest overall season starts in years.

The teammates have combined to win four stages – the most by one organization in the series to date. The team’s combined 220 laps led is most to date and Bowman has paced the group with 113 of the laps out front – including 110 in his win on Sunday.

In particular, it was ideal timing for Bowman.

“Bringing home the win in the third race of the season is a great way to start the year,” Bowman conceded. “(Crew chief) Greg (Ives) and the guys brought a hot rod last week and it showed from the start of the first practice. This team has worked extremely hard over the offseason and it is great that it is showing so early in the season. Win number one with Hendrick Motorsports was great, but the second one was even better.”

The final stop on the annual Western Swing – as the Las Vegas, California, Phoenix trio of races is known – happens to be a particularly strong venue for the team as well. Hendrick Motorsports has 10 wins at the famed Phoenix one-miler – most among the competition.

The combination of Bowman’s recent hot streak, the Hendrick team’s record of success at Phoenix and its strong season start make it a sure favorite to watch this weekend.

Stewart-Haas Racing also presents a formidable foe in driver Kevin Harvick, who has a record nine Phoenix trophies to his credit. Both Busch and Harvick – two of last year’s Championship 4 eligible drivers – are looking for their first victory of the 2020 season.

This has been an absolute break-out year for some of the sport’s most talented young drivers – from 21-year old Noah Gragson’s maiden series win in the Daytona season-opener to 25-year old Chase Briscoe’s win at Las Vegas to 19-year old rookie Harrison Burton’s first career win at California’s Auto Club Speedway last weekend.

The top of the championship standings includes a vastly new slate of names and these drivers have not disappointed giving every reason to believe that Saturday’s LS Tractor 200 at Phoenix Raceway will carry some of that fresh excitement too.

With his win last week Burton took the lead in the Xfinity Series driver standings by 10 points over the 25-year old Briscoe. The one-two California finish by Joe Gibbs Racing teammates Burton, 19 and Riley Herbst, 21 was the youngest one-two finish in series history.

One of last year’s young breakout stars, 21-year old Team Penske driver Austin Cindric rallied to his second top-five finish of the year in California and sits in third place in the series driver standings, only 18 points behind Burton.

Sieg, whose two top-five finishes already equals his best ever season top five total, is having the best season start of his career. He’s fourth 24 points behind Burton. And Kaulig Racing’s Justin Haley is fifth, 31 points off Burton.

The racing on this week’s Phoenix one-miler has been anyone’s game of late. There have been five different winners in the last five races. And among the 2020 Xfinity championship contenders, JR Motorsports driver Justin Allgaier is the only multi-time Phoenix winner, earning his second trophy just last November. He comes into the race ranked 10th only 38 points behind Burton.

This week reigning NASCAR Cup Series champion Kyle Busch will be attempting to make series history. He is an 11-time Xfinity Series race winner at Phoenix – tying him with NASCAR Hall of Famer Mark Martin – who won 11 times at Rockingham Speedway in North Carolina – for the most wins at one track. A 12th trophy for Busch this week would be historic and simply another chapter of greatness for the Las Vegas native in Phoenix. He already holds the record for wins (11), pole positions (nine), top-10s (19) and Laps Led (2,156) in the Xfinity Series at Phoenix Raceway.

WDUN will carry live MRN Radio coverage of the NASCAR race weekend from Auto Club Speedway, starting with Saturday's NASCAR Xfinity Series LS Tractor 200 at 3:30 pm on 102.9 FM and streaming live on AccessWDUN.  Coverage continues on Sunday with the NASCAR Cup Series FanShield 500 beginning at 2:30 pm on 102.9 FM, AM 550 and streaming live on AccessWDUN.

NASCAR Cup Series
Next Race: FanShield 500
The Place: Phoenix Raceway – Avondale, AZ
The Date: Sunday, March 8
The Time: 3:30 p.m. ET
TV: FOX, 2:30 p.m. ET
Radio: MRN, SiriusXM NASCAR Radio
Distance: 312 miles/500 kilometers (312 laps)
Stage 1 (Ends on Lap 75), Stage 2 (Ends on Lap 190),
Final Stage (Ends on Lap 312)
2019 Race Winner: Kyle Busch
What to Watch For: Joe Gibbs Racing swept both NASCAR Cup Series races last season at Phoenix. … Kyle Busch is defending winner of this Spring race and has won two of the three races to date on the newly-renovated Phoenix one-miler. … Kevin Harvick is the all-time winningest driver at Phoenix Raceway with nine victories. A win this weekend for Harvick would make him the sixth driver in history to score 10 wins at a track, and the first to do so at Phoenix. NASCAR Hall of Famer Richard Petty won at least 10 races at five different tracks. … Harvick has the most top-five finishes (17) and the most top-10 finishes (23) at the track. … Only four drivers entered this week have won multiple times at Phoenix led by Harvick (nine wins), Johnson (four), Busch (three) and Newman (two). …. Busch won the Fall, 2005 race then again in Fall, 2018 making the longest span between race victories at Phoenix Raceway. … The pole-winner has won the race five times at Phoenix. Only two active drivers have accomplished that – Harvick in Spring, 2015 and Johnson in Fall, 2005. … In eight of the last 10 races, the winner has started 10th or better. …. Seven of 47 races at the track have gone into overtime. The last overtime race was Spring, 2017 when Ryan Newman beat Kyle Larson for the win. … Kyle Busch has the most runner-up finishes (four) among active drivers at Phoenix. … Kevin Harvick boasts the best average finish (9.2) and driver rating (110.5) among drivers. … Three active drivers made their Cup series debut at Phoenix – Ryan Newman (Nov, 2000), Clint Bowyer (April, 2005) and Matt DiBenedetto (March, 2015). … Clint Bowyer has made the most starts (29) without a victory at Phoenix. … Alan Kulwicki won the very first race at the Phoenix track in November, 1988. … The closest Margin of Victory (MOV) is .010-second when Harvick beat Carl Edwards in March, 2016. … Hendrick Motorsports is the winningest organization at Phoenix with 10 victories. … Chevrolet is the winningest manufacturer at Phoenix with 23 wins. Ford has 16 and Toyota has six – including four of the last five races. … Chevrolet won a record 10 straight races from 2005-2009. … Ricky Rudd won the race in 1995 from the farthest starting position (29th) on the grid. … The fewest laps led in a single NASCAR Cup Series race at Phoenix Raceway by the race winning driver was four laps of the scheduled 378 laps (1.05%) by Ryan Newman in April of 2010. He started 14th and won the event. … Six of the last 10 NASCAR Cup Series Spring races at Phoenix Raceway have had a caution come out within the last 15 laps of regulation.

NASCAR Xfinity Series
Next Race: LS Tractor 200
The Place: Phoenix Raceway – Avondale, AZ
The Date: Saturday, March 7
The Time: 4 p.m. ET
TV: FS1, 3:30 p.m. ET
Radio: MRN, SiriusXM NASCAR Radio
Distance: 200 miles (200 Laps)
Stage 1 (Ends on Lap 45), Stage 2 (Ends on Lap 90),
Final Stage (Ends on Lap 200)
2019 Race Winner: Kyle Busch
What to Watch For: Sunoco Rookie of the Year candidate Harrison Burton leads the championship by 10 points over Chase Briscoe. The 19-year old Burton earned his first career Xfinity Series win last week at Auto Club Speedway. … Kyle Busch has the most wins (11) at Phoenix Raceway. He swept the March, 2019 weekend taking trophies in both the NASCAR Xfinity and NASCAR Cup Series races. … Six drivers have multiple Xfinity Series wins at Phoenix – Kyle Busch (11), Carl Edwards (four), Greg Biffle (three), Brad Keselowski (two), Justin Allgaier (two) and Joey Logano (two). … Justin Allgaier, who won at Phoenix in November, has led the most laps (334) and has made the most starts at the track (19) among fulltime Xfinity Series drivers. … In seven of the last 10 races, the driver leading the most laps has won the race. … In November, 2014, Kyle Busch led 187 of the 200 laps but finished second to Brad Keselowski. … In 2016, Busch led 190 of the 200 laps en route to his 10th win. It’s the most laps ever led by a driver. … The pole position is the winningest spot on the starting grid producing 10 race winners. The last polesitter to win was Kyle Busch in Fall, 2016. Six of his 11 wins have come from pole position. … Eight times a driver has won from the outside pole making the front row the most productive (18 wins) on the starting grid. … The most lead changes in a race is 14 (2008-1). … The largest margin of victory in a Spring race is 3.025-seconds when Kyle Busch won last year. … The closest Margin of Victory in a Spring race is .241-seconds when Kyle Busch beat Carl Edwards in 2008. … The farthest back a driver has started and won the race is 38th – Christopher Bell did it in 2018. … NASCAR Hall of Famer Jeff Gordon won the first Xfinity race at Phoenix in November, 1999. …. Ford has won 13 races. Toyota has 12 wins and Chevrolet has eight. Toyota has won five of the last 10.