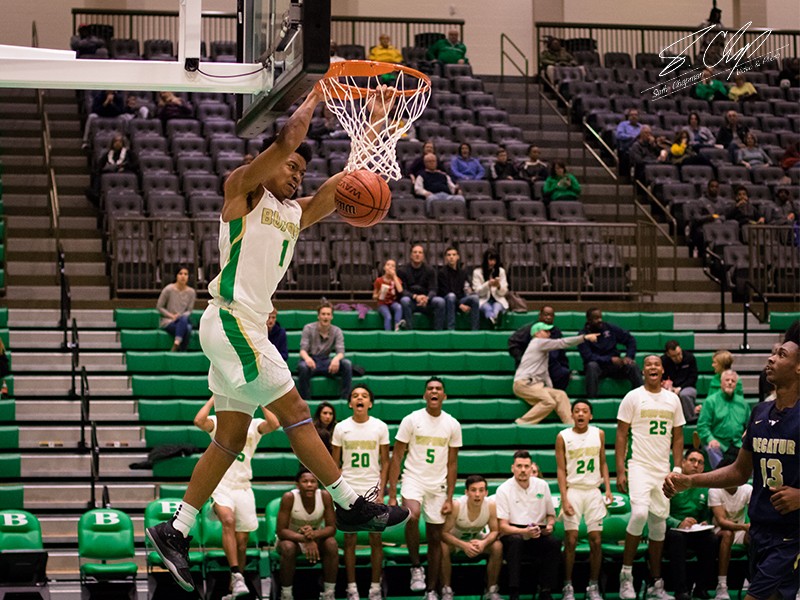 Buford's Caleb Williams throws down a dunk Saturday against Decatur in the Wolves' 75-57 win in the first round of the Class 5A playoffs.
Photo/Seth Chapman 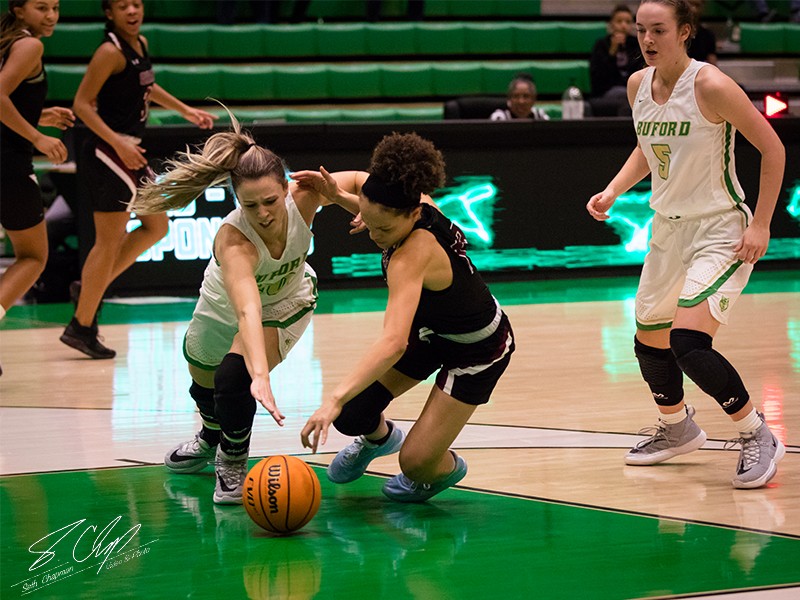 BUFORD — If offensive balance in the playoffs is a key, then the Buford boys may have unlocked the secret door to defending their state title Saturday.

Caleb Blackwell, James Munlyn, and Caleb Williams combined for 45 points to lead the Wolves to a 75-57 win over Decatur in the first round of the Class 5A tournament at The Buford Arena.

The height of Munlyn (6-foot-11) and the slashing and shooting ability of Blackwell and Williams, combined with the acrobatics of Sebastian Augustave, gave the Bulldogs a variety of lineup mismatches that also offers plenty of nightmarish game film for the rest of the Class 5A field.

“I’ll take that every night,” Buford coach Eddie Martin said. “We can go big with James or go small with the rest of the group and that makes the other teams have to prepare for a lot of different looks than just one style. I thought we got a lot of production from both lineups.”

Munlyn dominated early scoring 8 of the Wolves' first 12 points as they pounded the ball inside and led 12-3 barely halfway through the first quarter. But five different Buford players also scored in the period as they raced out to a 22-8 lead.

The Wolves (21-6) maintained a double-digit lead the rest of the half. A Carson Bell 3-pointer gave Buford a 27-13 lead moments into the second quarter and a Williams basket made it 35-21. A Blackwell basket at the buzzer gave the Wolves a 41-27 advantage at the break.

A Williams steal and dunk early in the third quarter had the Wolves ready to break it open with a 45-27 lead. But the Bulldogs (18-12)chipped away behind Rod Lucas and Kenric Lanier.

Lanier capped a 7-0 Decatur run to pull within 45-34 and the duo hit a pair of 3-pointers late in the period to make it a slim 50-42 Buford lead heading into the fourth quarter. But Buford answered with a 9-0 blast in the first 100 seconds of the fourth quarter to retake control.

“It’s always a game of runs,” Martin said. “You’re going to go on some and you’re going to have to withstand some in every game. Early in the season, I don’t know that we could have held on being as young as we were.”

Williams capped the quick start to the fourth with a steal and layup for a 59-42 lead but Decatur had one last spurt. A Lucas basket cut it to 62-49 and what would have been a driving layup and a chance to complete a three-point play and cut it to 10 with over three minutes left was called traveling instead.

Buford answered with an 11-2 run for an insurmountable 73-51 lead with just 56 seconds left.

“At this time of year, with the experience of playing a whole season, we should’ve been able to respond and we did,” Martin said. “Very proud of the effort tonight.”

Blackwell had 16 points, Munlyn 15, and Williams 14 for the Wolves. Augustave added 9 points for Buford.

The Wolves now will turn their attention to Statesboro in the 2nd round. They will play host to the Blue Devils next week with a day and time yet to be determined.

“(Statesboro) is always a well-coached team. Everyone is good at this point so we’re just going to have to get ready for another tough game,” Martin said.

Buford girls coach Gene Durden wasn’t displeased with his Lady Wolves’ win over Grady Saturday in the first round of the Class 5A playoffs.

But he also knows looks can often be deceiving. The 32-point win was closer than he would have liked.

“We had the big lead early but then let them get back within seven points,” Durden said. “We didn’t have that killer instinct I like to see this time of year. That is something we will have to improve on.”

Buford (27-1) stormed out of the locker room jumping out to a fast 13-0 lead behind its defensive pressure and five quick points by Tatum Ozment. Buford forced five Grady turnovers to open the game leading to 12 points -- the Lady Knights had 12 turnovers in the first quarter -- and the Lady Wolves eventually built a 21-4 lead.

But Grady finally was able to solve the Buford press using a 17-7 spurt into the second quarter to pull within 28-21. Buford answered with a 7-0 run on baskets by Courtney Martin and Katelyn Klein sandwiched around a Blair Wallis 3-pointer. Grady trailed 40-28 at the half after another Wallis 3-pointer at the buzzer.

The Lady Knights were their own worst enemy with 17 turnovers that led to 22 Buford points. But Buford did have 8 steals. Take away even half of the transition points and it’s a much different game.

“Grady did a good job of getting back in the game, give them credit,” Durden said. “But you have to mash the gas when you have a chance to put a game away early and we didn’t do that.”

The third quarter was much the same as the first half as Buford raced out to a 20-point lead on a Wallis 3-pointer only to see the Lady Knights climb back to within 16 on a pair of 3-pointers. But the defense finally clamped down holding Grady to just three fourth-quarter points while the reserves blew it open.

But after a month of playing in a weak Region 8-5A -- the other three teams were swept out of the playoffs on Friday -- Durden also thinks Saturday’s win could be a solid launching point as they try to defend their state title.

“We’ve been in a lull really over the last couple of weeks so this is a game I think that will really help this group,” Durden said. “Just getting that experience in the playoffs and seeing that you have to come out ready and focused and put the gas down when you have the chance.”

Wallis poured in a game-high 23 points on the strength of five 3-pointers. Ozment finished with 14 points and Tate Walters had 13 as nine different players scored for the Lady Wolves.

Grady was led by Trinity Lewis with 16 points. Jailyah Lett had 12 for the Lady Knights.

Buford moves on to play Wayne County in the second round next week at The Buford Arena. The day and time will be determined later.