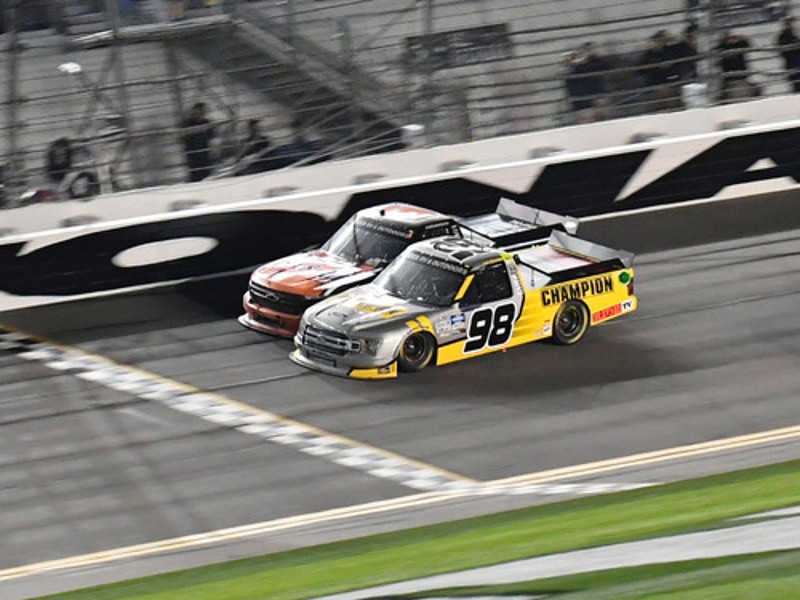 Grant Enfinger (98) races Jordan Anderson (3) to the checkered flag in Friday night's NASCAR Gander Outdoors Truck Series race at Daytona International Speedway. Enfinger would get the win by one-hundreth of a second.
Photo by Mike Mercurio 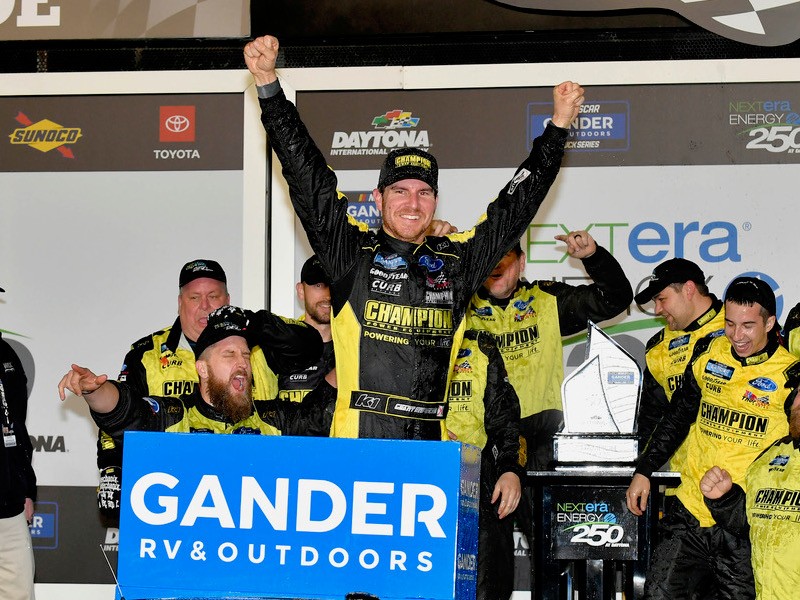 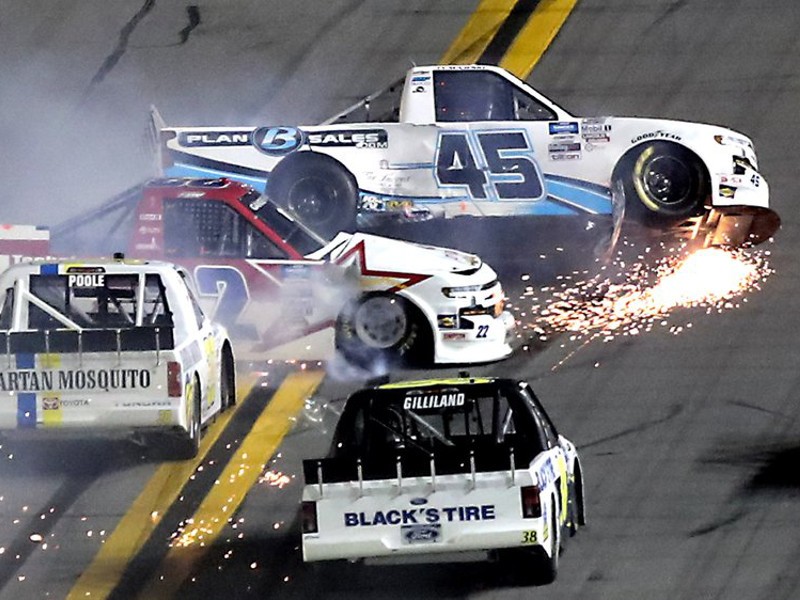 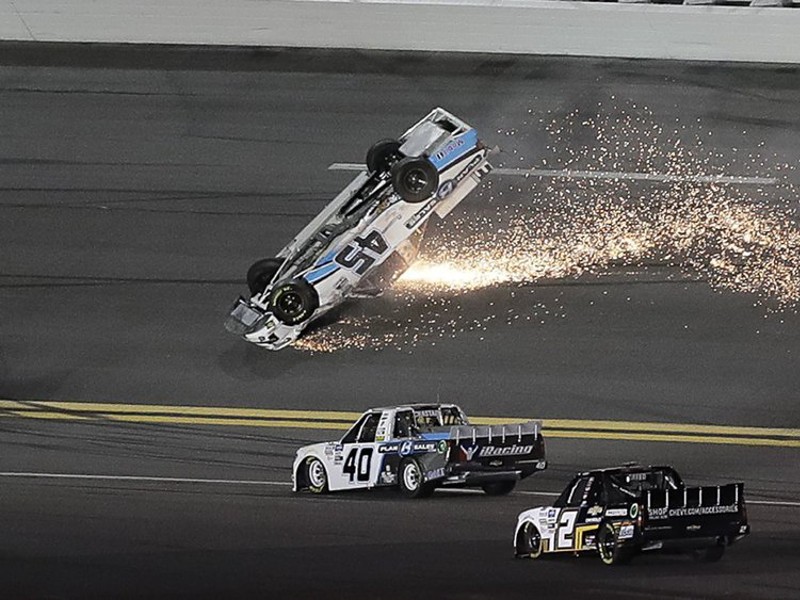 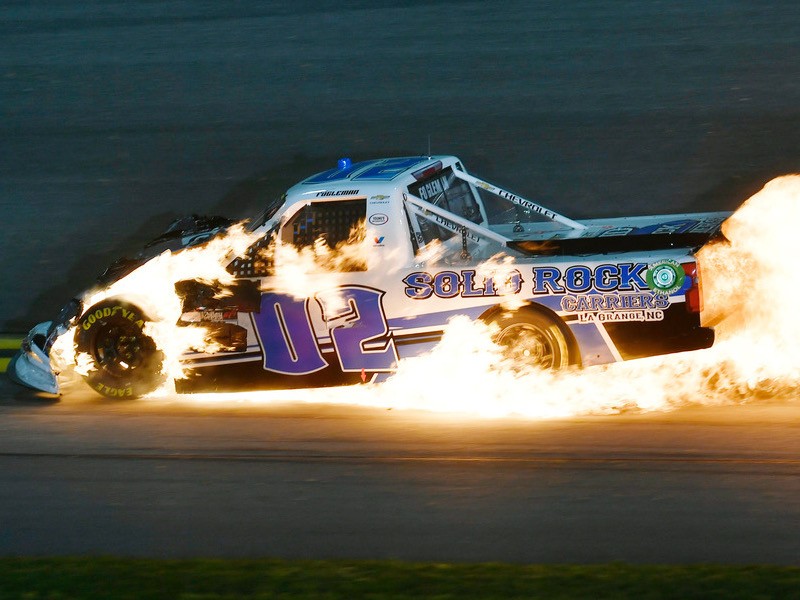 In an overtime finish, Enfinger had the lead coming off of turn four to the checkered flag. Within sight of the finish line, Jordan Anderson powered to the outside, moving alongside Enfinger in a bid for the win.

The two made contact, bouncing off each other a couple of times as they came to the line. In the end it was Enfinger score the win by one-hundredth of a second.

“It’s an unbelievable feeling,” said Enfinger. “It’s the 100th win for Ford in the NASCAR Gander RV & Outdoors Truck Series, so it’s great for them. More importantly it’s the 25th anniversary for (team owners) Duke and Rhonda Thorson, who have put so much into this sport.

“The biggest thing is we had a really good Ford F-150 to do it with. With four or five laps to go it was time to go and we were able to get up in the third groove and make some stuff happen. We got the lead on that big wreck going into one and two and that’s what kind of sealed the deal for us. My buddy, Ross (Chastain) gave me some good pushes at the end. I know he was trying to reach out on us and I was able to block him, but it’s just an unbelievable night.”

“To try to put into words what this means for our team, I had to move some money around this winter just to get through to buy this truck,” Anderson said. “We knew that we needed to bring the best truck that we could. This sport isn’t easy, and I love NASCAR, I love this sport. This is what NASCAR is about, man.”

Codie Rohrbaugh came home in third, almost sneaking into the fight for the win on the low side. It was a strong rebound for Rohrbaugh, whose No. 9 truck was sent spinning down pit road on lap 35 after contact with another truck. There was no caution, and Rohrbaugh lost a lot of time as a result.

It was a night of mayhem for the trucks, as three-wide racing at times resulted in big crashes. The first occurred on lap 15 as the field exited the tri-oval, when Tate Fogleman got loose off of the front bumper of another truck, turning him into the side of the truck of Austin Wayne Self.

Self’s truck turned down into the door of Ty Majeski, sending Majeski’s truck sideway into the wall, where it then flipped over on its roof before sliding upside down in a shower of sparks into turn 1.

Majeski was unhurt, but couldn’t exit his truck until safety crews were able to right it. The race was red flagged for eight minutes to allow for clean up.

After finishing the first segment, the race went caution free through the second segment, the field raced hard but clean, with the lead pack racing side-by-side several times. The action was broken up again on lap 65, when Angela Ruch’s truck broke loose after contact with Derek Kraus. Ruch’s truck turned up the track, gathering up the trucks of Brett Moffitt and Fogleman in the process.

The oil cooler was knocked off of Fogleman’s truck, resulting in a fireball under the hood. As he came to a stop the truck of Bryan Dauzat hit him in the rear after being caught up in the incident. Christian Eckes was also involved in the crash.

The final caution of the night flew with just three laps to go, and it involved much of the lead pack. It occurred as Enfinger, Ben Rhodes and Todd Gilliland raced three wide for the lead, with Rhodes in the middle. Rhodes truck suddenly broke loose off the front bumper of Johnny Sauter. Rhodes’s truck was turned down into the side of the 38, triggering a crash that swept up 11 trucks in all, including Rhodes, Sheldon Creed, Sauter, Eckes, pole sitter Riley Herbst and others.

On the final lap, Chastain was again looking for the passing lane when his truck broke loose, killing his momentum and sending the pack behind him scrambling.

Up front, Enfinger still held the point, as the field jostled behind him. As he came off turn four, Anderson made a move on the outside, but came up just short at the finish line.