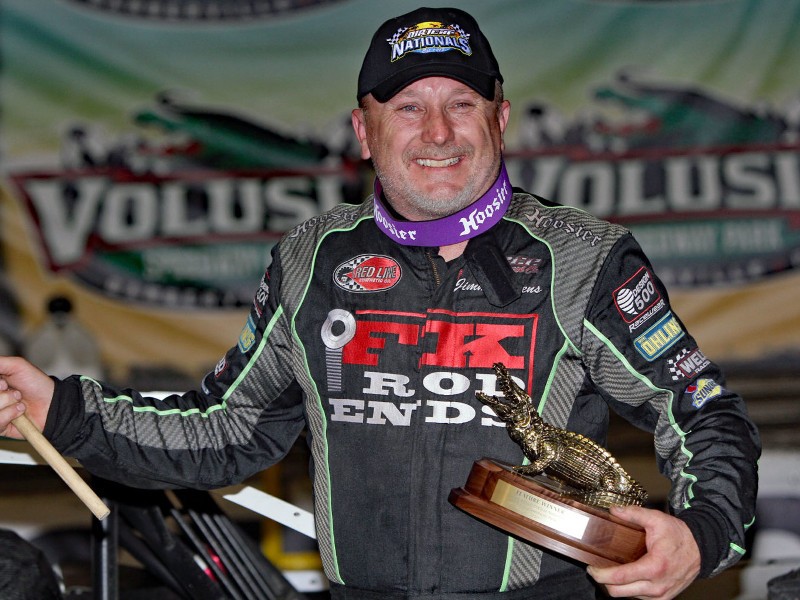 Jimmy Owens shows off the first Gator Trophy of his career after winning the on World of Outlaws Late Model Series Thursday night at the DIRTcar Nationals at Volusia Speedway Park.
Photo: Jim DenHamer
Contact Editor

BARBERVILLE, Fla. - Jimmy Owens has won almost 600 races in his career, including nearly every big Dirt Late Model race out there, but it took until Thursday night for him to earn his first Gator trophy at the DIRTcar Nationals at Volusia Speedway Park in Barberville, Florida.

Owens, of Newport, Tennessee, dominated the World of Outlaws Morton Buildings Late Model Series main event, leading all 40 laps while behind him a furious battle was on to challenge him.

A caution with nine laps to go set up a shootout to the finish, but Owens was so strong he simply pulled away.

For the second consecutive night, Larry Wight held off Stewart Friesen to capture the Super DIRTcar Series Feature. Wight started on the outside of the front row and quickly took command of the 30-lap race on the high side of the track.

With only one caution Wight, of Phoenix, New York, held Friesen and the rest of the field at bay to win his third Gator Trophy and second in as many days.

“This car has just been on a rail,” Wight said. “We put the same setup in as (Wednesday) night and it was still glued to the track. Hopefully we can keep it going for the rest of the week. The car is good enough to where I don’t even need to run the cushion. Any time you’ve got Stewie (Stewart Frieson) right behind you, you definitely don’t want to see a restart. He’s a phenomenal restarter and he’s usually able to make stuff happen. The farther I can keep him behind me the better.”

The DIRTcar Nationals continues on Friday night, as the World of Outlaws Late Models and the Super DIRTcar Series return to action.