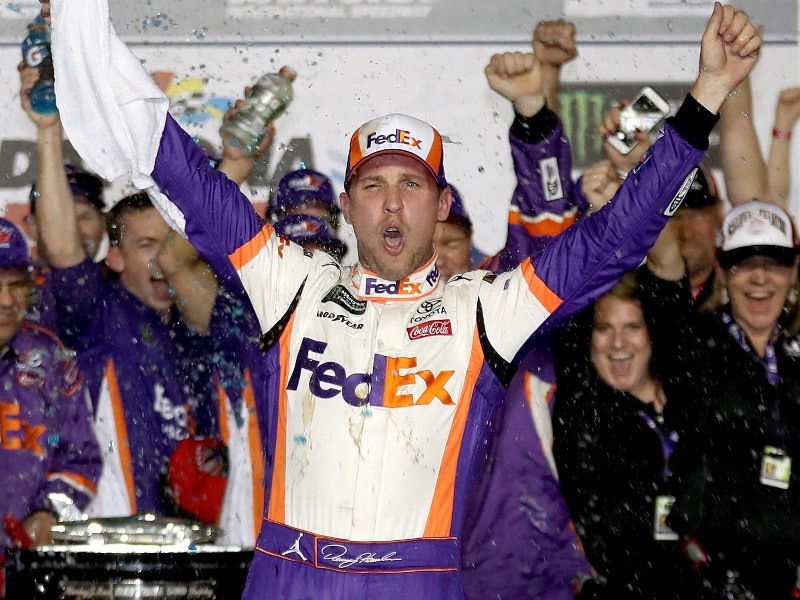 DAYTONA BEACH, Fla. - The storylines are aplenty for the 62nd running of NASCAR’s Great American Race, the Daytona 500 and by the time cars grid at Daytona International Speedway for Sunday’s green flag, a new season’s worth of high aspirations will be on the line.

Seven-time champion Jimmie Johnson will begin his farewell season with every intention of putting an exclamation point on his NASCAR Hall of Fame bound career by winning races and challenging for a record eighth title. His young teammate Alex Bowman will start on the Daytona 500 front row for the third consecutive season.

Joe Gibbs Racing, which won a modern era record 19 races in 2019 and a NASCAR Cup Series title with driver Kyle Busch, will be hoping to duplicate its unprecedented season. JGR driver Denny Hamlin is the defending Daytona 500 champion.

A crowded and highly-decorated class of six rookies – Tyler Reddick, Cole Custer, Christopher Bell, John Hunter Nemechek, Brennan Poole and Quinn Houff – will have the opportunity to establish their place at the Cup Series level. And with established teams behind them, this group of young talent may well be a force to be reckoned with even in Sunday’s 2020 opener.

First-time Daytona 500 polesitter Ricky Stenhouse, Jr. and his longtime crew chief Brian Pattie have started their relationship with a new team, JTG Daugherty Racing, in high-style. Both of Stenhouse’s previous Cup wins have come on big tracks like Daytona. The last polesitter to win the Daytona 500, however, was Dale Jarrett in 2000.

For his part, Johnson has been upbeat about this first race in a season of last races.

“It’s not the end of the year, so I’m very excited,” said Johnson, driver of the No. 48 Hendrick Motorsports Chevrolet. “All the emotions are just fun and excitement for myself, my family and team. But comparing to my first year, I showed up here not knowing if I was a Cup driver or could fit in here or was going to have a career in this sport. Insecurity was maxed. Not self-esteem, but self-confidence was low.

“I not only had to prove to the world, but I’m still trying to prove to myself that I could do it at this level. Much different headspace (today).”

Two of the last three Daytona 500s have been last-lap pass victories – 2017 Kurt Busch and 2018 Austin Dillon both led only the last lap en route to their 500 trophy.

And all of this season-opening excitement will be under the watchful eye of United States President Donald Trump, who will be attending his first Daytona 500.

Xfinity Series Set To Roll Off At Daytona

With the racing “graduation” of several of the last two season’s championship contenders – including two-time Xfinity champion Tyler Reddick, Cole Custer, Christopher Bell and John Hunter Nemechek all to the NASCAR Cup Series this year – the 2020 Xfinity championship field has a distinctive new competitive look.

When it comes to Saturday’s season-opening NASCAR Racing Experience 300, recent years have pointed to a new trend decidedly favoring the title contenders. Series regulars have won this race in five of the last six seasons, including the last three. No one’s earned back-to-back victories since Tony Stewart won four straight from 2008-2011.

Last year the top-five finishers were all championship competitors, from winner Michael Annett to fifth-place Austin Cindric. Those two, along with Chase Briscoe, veteran Justin Allgaier and the talented youngster, Noah Gragson are all considered championship favorites this year.

This Daytona Speedweeks season opening race likely has been circled on Allgaier’s calendar, in particular. He finished runner-up to Annett last year by a mere .116-second. He, the 19-year old Cindric – a two-race winner in 2019, and Briscoe, 25, who collected his second Xfinity victory last year, are certainly title favorites for 2020. Highly-touted second-generation driver Harrison Burton makes his fulltime debut.

Gander RV & Outdoors Truck Series Is All Set For 2020

Last year’s Daytona race winner Hill made his first NASCAR Playoff appearance in 2019 and is expected to be a big player in this year’s title run, as is 2018 series champion Brett Moffitt.

Five drivers begin their Sunoco Rookie of the Year campaigns – Raphael Lessard, Zane Smith, Christian Eckes, Ty Majeski and Tanner Gray – and all of them bring stacked resumes to the series.

Majeski, a late mode champion, takes over the Niece Motorsports ride that Ross Chastain won three races in last season, qualifying for the championship. Gray comes to his fulltime NASCAR ride with the DGR-Crosley team transitioning from a hugely successful drag racing career where he hoisted the 2019 NHRA Pro Stock championship trophy.

NASCAR Xfinity Series
Next Race: NASCAR Racing Experience 300
The Place: Daytona International Speedway – Daytona Beach, FL
Defending Winner: Michael Annett (JR Motorsports)
The Date: Saturday, Feb. 15
The Time: 2:30 p.m. ET
TV: FS1
Radio: MRN, SiriusXM NASCAR Radio
Distance: 120 laps (300 miles)
What to Watch For: Tyler Reddick’s win in 2018 is the closest margin of victory in NASCAR national series history – .0004-seconds, a photo finish between Reddick and Elliot Sadler. … Dale Earnhardt and Tony Stewart share the record for most wins (seven). Earnhardt won five consecutively from 1990-94. …. No current full-time Xfinity Series driver has won multiple times in the race. … The last driver to win both the Xfinity race and the Daytona 500 was Kevin Harvick (2007). …Former series champion Joe Nemechek has made the most starts (25) in the race. He also holds the record for most pole positions (four). … Tony Stewart’s two wins from the pole is most all-time. … Dale Earnhardt’s five consecutive wins is most all-time. …Red Farmer holds the record for most consecutive starts (19; 1963-80). … Chevrolet (31) is the winningest manufacturer. …The most drivers to lead the race is 20 (2013). … The most lead changes is 38 (2012). … The lowest starting position for a race winner is 42nd by Chad Little in 1995. … NASCAR Hall of Famer Darrell Waltrip holds the record (162.675 mph) for the fastest lap in race (1978). The fastest qualifying lap is 194.389 mph set by Tommy Houston in 1987. …. Joe Nemechek’s 105 laps led in 1998 is the most ever by a race winner and most ever by any driver, period. … Paul Goldsmith holds the record for most laps led (101) without winning the race (1967). …This race has been won by full-time Xfinity Series drivers five of the last six years. …. The last time a driver won back-to-back races was 2008-2011 when Cup champion Tony Stewart won four straight.