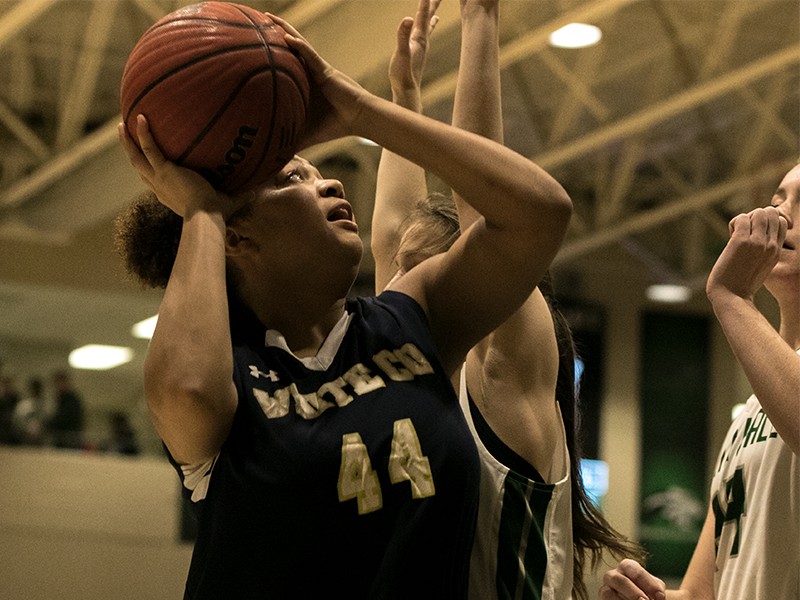 Dasha Cannon (44) is hoping to lead the White County girls basketball team to its first state playoff win since 1984 when the Lady Warriors play host to Central-Carroll on Friday night in the first round of the Class 4A playoffs.
Photo/Mark Turner, White County News
Contact Editor

The Dawson County girls will tip-off the 2020 state tournament for northeast Georgia area teams traveling to Cedar Grove on Thursday in the first round of the Class 3A tournament.

The Lady Tigers are one of 14 area girls teams to advance to the playoffs spanning six classifications. Many are continuing long playoff runs while others are looking to get back in the playoff mode after long absences.

WHAT TOOK SO LONG?

It’s been nearly 30 years and five Presidents ago since the Lumpkin County girls found themselves in a tournament bracket. But that changes on Friday as the Lady Indians will be making their first playoff appearance since 1991, and just their second playoff appearance ever in program history. The Lady Indians have been somewhat of an enigma this season. They have the fifth-best power ranking in all of Class 3A after the regular season and region tournaments. They have beaten several high-profile teams during the season (i.e.: whipped GAC by 32 and North Hall by 15). But could not get out of a brutal Region 7-3A tournament losing in the first round. However, the high power ranking secured them the at-large bid and a spot in the state tournament. The bad news is they get No. 1-ranked and defending state champion Johnson-Savannah on the road to open the playoffs. Do not discount them, however. They have the firepower and defensive skills to play with, and beat, anyone in the state. They could deliver the first huge upset shot of the playoffs if they bring their “A-game.”

-- In Class 5A, Buford continues to be the benchmark. The Lady Wolves are making their 19th straight playoff appearance and come into the 2020 tournament as the three-time defending Class 5A champions. For nine of the last 11 years, spanning four different classifications, Buford has either been the runners-up (2) or state champions (7). But this will be their final season in Class 5A as they are slated to move up to Class 6A next year. They are the likely favorite to repeat as champions and could leave behind a perfect four-year run in Class 5A.

-- In Class 2A, Rabun County is making its 12th straight appearance and 13th in 14 seasons under coach Dee Dee Dillard. But they come in as the No. 4 seed out of Region 8-2A after a pair of upset losses in the region tournament. The Lady Wildcats were ranked as high as No. 2 in Class 2A for most of the season. They have advanced to the quarterfinals or better for four consecutive seasons, including finishing as the 2017 state runners-up. They could be the toughest No. 4 seed in the state in any classification. However, they travel to No. 1-ranked and defending state champion Douglass out of Atlanta in the first round. This could be the best matchup in Class 2A the entire playoffs with the winner perhaps having the inside track to the finals on their half of the bracket. It’s not the path Dillard probably would have preferred but the Lady Wildcats could make an early statement that they have not gone anywhere.

-- In Class 3A, the aforementioned Dawson County girls are making their eighth straight appearance, which is adding to a program-best streak. However, the Lady Tigers have a strange quirk in which every other year during that run they have advanced to the quarterfinals of better. In 2019 they made the quarterfinals. In 2018 they lost in the first round. Will they put that quirk to bed this year?

-- Also in Class 3A, Jefferson is making its eighth straight appearance, which also ties a program-best streak from 2000-2007, spanning three classifications. The Lady Dragons have gotten to the quarterfinals each of the last three seasons. In the 2020 tournament, they come in third overall in the power rankings and they lead all of Class 3A in wins with 23. They are 9-2 at home with their only losses coming to Buford and Class 7A powerhouse North Forsyth. They have a tough opener against Region 6-3A No. 4 seed Coahulla Creek, which has won 20 games on the season.

-- North Hall, the Region 7-3A champion, is making a program-best 7th straight playoff appearance, and its ninth appearance in the last 10 years. The Lady Trojans are hoping to follow a similar path from the last time they won a region title when they went on a Final Four run in 2012. However, they have not been able to get past the Sweet 16 since then. They have shown they can beat teams that play a variety of styles. With their win over at GAC in the region finals, the Lady Trojans became the only team this season to beat every 7-3A team at least once during the regular season or tournament. They play host to Pace Academy in the first round and are considered heavy favorites to advance.

-- In Class A Private,  Lakeview Academy also is making its seventh straight appearance, which also is a program-best streak. The Lady Lions have reached the quarterfinals or better three of the last four seasons, including a semifinal run in 2017. They are one of four Region 8-A teams to make the 24-team field. But they have a tough draw with powers Greenforest (possible 2nd round opponent) followed by No. 2 Hebron Christian, which has beaten the Lady Lions by a combined 79 points in their two meetings this season. Lakeview, which is 10-1 at home, opens at home against Mt. Pisgah, which is 5-4 on the road.

-- The Flowery Branch girls are into the playoffs for the sixth straight season and 10th time in the last 11 years. They have advanced to the quarterfinals or better each of the last four seasons and the semifinals or better each of the last three seasons, which includes a state runner-up finish in Class 5A in 2018. But this year has been an up-and-down season for the Lady Falcons, who have battled illness, injuries, and the suspension of two of their top players early on. And they faltered in the Region 7-4A tournament dropping to fourth, which could make them one of the more dangerous teams in the classification. They open on the road against Region 5-4A champ Sandy Creek, which came into its region tournament as the No. 3 seed only to shock No. 1 seed Troup County in the final. The Branch has playoff experience and knows how to win on the road in the playoffs. They also have Region 7-4A Player of the Year Ashlee Locke. Be on the alert for a possible upset here.

-- Back to Class 2A, Banks County is making its sixth straight appearance, which is also a program-best streak. The Lady Leopards came into the region tournament as the No. 5 seed, however, they got hot and finished as region runners-up. They made the quarterfinals in 2018, which was the first time they had reached that far in the playoffs since 1980 and they have won three state playoff games over the last two years, which is more than they had had in program history up to that point. They are 2-1 in their last three home playoff games.

-- Also in Class 4A, Chestatee is making its fourth straight playoff appearance and are into the playoffs for the ninth time in the last 11 seasons. However, the Lady War Eagles have never advanced past the Sweet 16, which they have done four times. They also have lost five straight first-round games. But they have picked up the pace at the end of the season winning 5 of their last 7 games down the stretch. They take on Troup County and this could be another upset alert if they come out firing from 3-point range behind Maggie McNair and Emma Eastwood.

-- The White County girls are making their third straight appearance in Class 4A, which is the best streak in the program since 1981-84. It's just the fifth appearance overall, however, since 1984 and the Lady Warriors are still looking for their first playoff win since that 1984 team. But coach Jarvis Davenport has steadily built the program into a viable playoff contender. They play host to Central-Carroll, which has not won a state playoff game since 2015, in just their second-ever home playoff game. This could be the year they finally breakthrough.

-- Union County was another surprise from Region 8-2A The Lady Panthers won their first region title since 2009 and are into the playoffs for the first time since 2016. They could be a darkhorse in Class 2A but have won just two state playoff games (2009 and 2016) since finishing as Class 2A state runners-up in 2001. They are 10-2 at home this season and could have homecourt advantage until the semifinals.

-- In Class 6A, it is the first playoff appearance for Habersham Central since 2017 and just their third appearance since 2002. The Lady Raiders have shown steady improvement in the last two campaigns. They open against Sprayberry but have been a good road team going 7-6 away from Mt. Airy this season. Their last playoff win came in 2012.