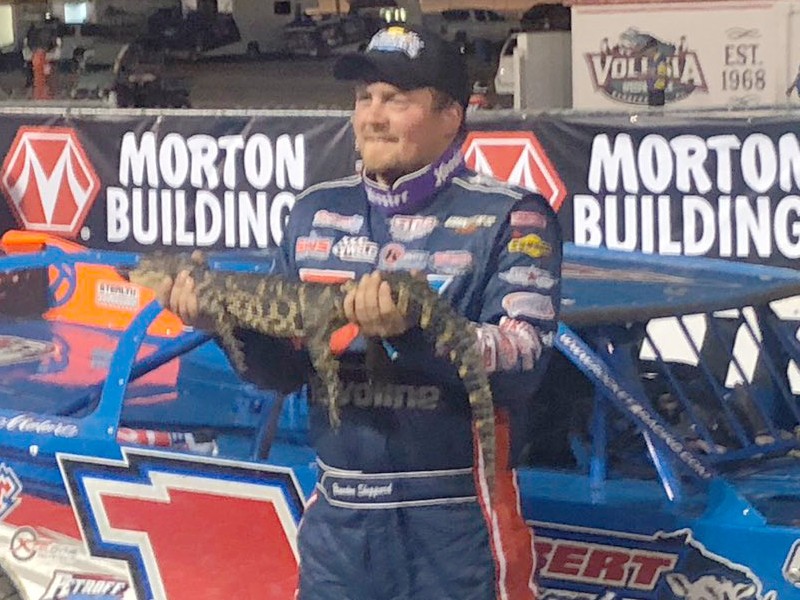 Dennis Erb, Jr. raced to the checkered flag in the World of Outlaws Morton Buildings Late Model Series feature after Mark Whitener and Brandon Overton knocked each other out of the race in a door-to-door battle for the lead with seven laps to go.

However, after the victory lane celebration, Erb failed to report to postrace inspection and was penalized to last place, handing the win to defending champion Brandon Sheppard for his first Series victory of the season.

Whitener was on point from the drop of the green flag, but seven different drivers swapped positions two through five until Whitener and Overton started slamming into each other trying to move to the lead. First, they hit in the middle of the backstretch, then crossed over in turns 3 and 4 with Whitener on the inside sliding up the track and knocking Overton over the cushion, bringing both cars to stop as Erb and Brandon Sheppard shot by on the bottom.

Erb rolled the low groove on the restart with Sheppard blasting around the top. Erb’s inside position was just enough to edge Sheppard by a nose at the checkered flag for what appeared to be his first win of the season until he missed going to post race inspection and was penalized, gifting the victory to Sheppard.

All that excitement set the stage for the Super DIRTcar Series event, where Larry Wight narrowly held off Stewart Friesen.

Defending DIRTcar Nationals champion Wight found a home on the top side of the track while Friesen was moving up and down trying to close the gap. With nine laps to go in heavy traffic, Friesen closed right on Wight. With three to go Friesen peeked to the inside of Wight exiting turn 4, but Wight had enough momentum to power off the corner and hold off Friesen to the finish.

The DIRTcar Nationals continues on Thursday night, with the World of Outlaws Late Models and the Super DIRTcar Series again in action.