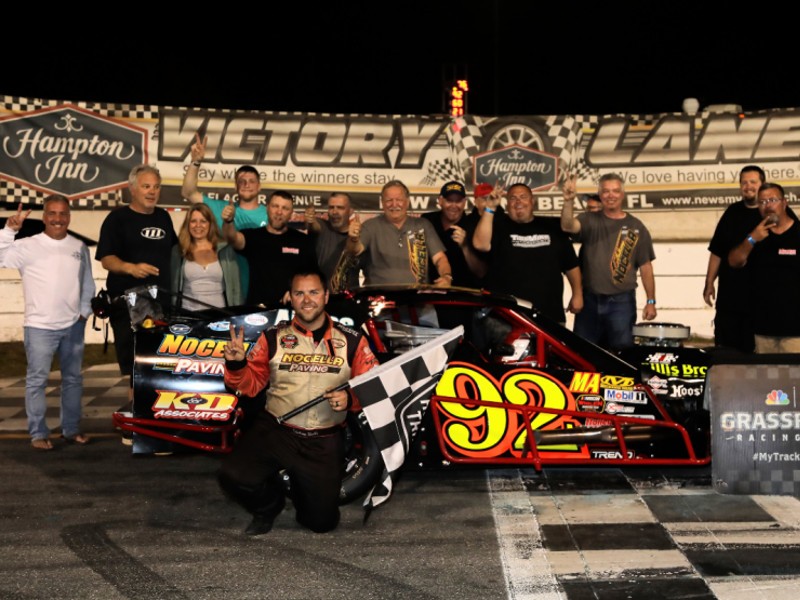 NEW SMYRNA, Fla. - It was too close to call.

The two battled side-by-side for the final 10 laps around the 0.48-mile raceway, with Nocella’s No. 92 on the inside and Hirschman’s No. 60 on the outside. Hirschman repeatedly diamonded the corners, looking for drive off to get alongside Nocella coming to the line.

He did so on the final lap, resulting in one of the closest finishes in the history of racing.

Officials reviewed video, but found no conclusive evidence to declare a winner or to overturn their initial ruling. An official margin of victory was unavailable due to Nocella’s transponder not functioning for the majority of the race.

“I just tried to get inside him there,” Nocella said of the finish. “We were able to clear him, get by him, used all that power off the corner at the end and had just enough to beat him to the line.”

It’s not the first time the two drivers have raced cleanly for an extended period of time this week. The two shook hands upon exiting their vehicles, showing the mutual respect the two have for each other on track.

“The toughest way to lose a race is when you get treated unfairly and that’s not the case because that’s a great race,” Hirschman said after wheeling his car out of Victory Lane after initially being believed to be the winner. “I’m not going to take anything away from the finish. From my seat, I felt I beat him by about 6-12 inches, I looked at a photo that sure looks like that, but that was the official decision, I’m told. I will have to live with it. I disagree but I’m not going to take anything away from the No. 92 or myself for what an incredible finish it was regardless of who the winner was.”

Nocella himself wasn’t sure whether or not he nipped Hirschman at the line. From everybody gathered in Victory Lane, it seemed like the closest thing to a dead heat you could get.

“We got to the throttle at the same time there, he got some more momentum off the top,” he said. “It was close. I couldn’t really tell. We were pretty much dead even from what I could tell.”

Nocella noted winning this prestigious race means the world to him and he’s just glad to be a part of it. Although he didn’t know John Blewett III, he’s good friends with his brother and competitor Jimmy.

“Coming from open wheel cars that I’ve ran all my life, that’s the way I think it should be racing, you know? They got nerf bars, you can beat and bang. We rubbed a little bit, but we ran there for the win, ran clean, ran with respect for each other. And it shows, we put on a good race for the fans.”

Hirschman, who finished runner-up for the third time in three nights, concurred with Nocella, citing the mindset of younger drivers compared to ones that put on the instant classic that Night Six of the World Series put on.

“That’s a lesson on how it should be done,” Hirschman said. “Unfortunately today, a lot of days the quality of racing isn’t like that. The ridiculous saying is ‘I did what I had to do.’ That’s a bunch of BS.”

“Right there is that you have to do, and both of us did that. It was decided by a photo or transponder and that’s the way it should be. It was a great finish, a clean fair race and that’s how it was decided. We both did our part, and like I said I can disagree with the other part but it may not matter.”

After leading a handful of haps, Jimmy Blewett finished third, with Ryan Preece, who started last, in fourth and Dave Sapienza in fifth.

Up next is night seven of the World Series of Asphalt Stock Car Racing, with the Super Late Models, Tour-Type Modifieds, Florida Modifieds and Pro Late Models back in action.