Johnson comes out of corporate shell for final season 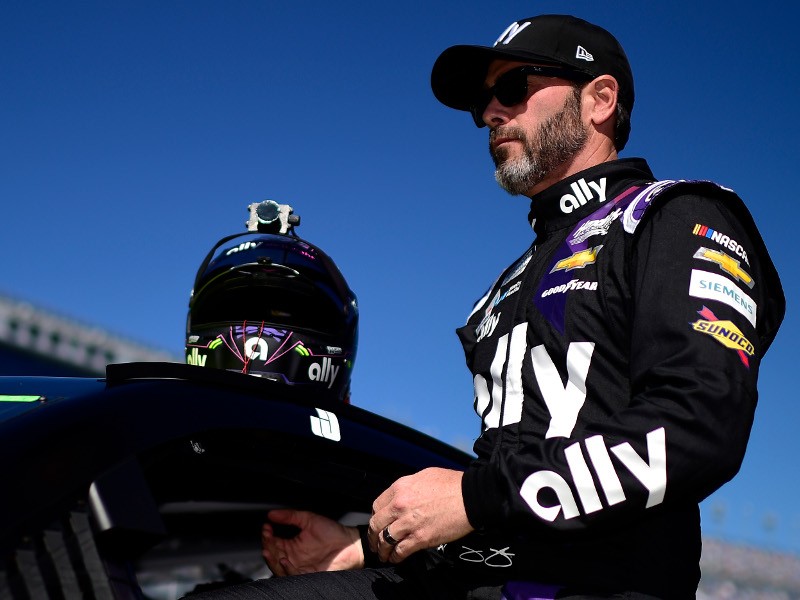 Jimmie Johnson enters the 2020 NASCAR Cup Series season — his last as a full-time driver — with significant mileposts dead ahead.

The first is at once the most obvious and the most challenging: a record eighth championship in NASCAR’s foremost division. But there are others.

Johnson’s next win, his 84th, would tie the 44-year-old from El Cajon, California with NASCAR Hall of Famers Bobby Allison and Darrell Waltrip for fourth on the career victory list. An 85th checkered flag would break that tie.

Johnson himself is a shoo-in to the NASCAR Hall of Fame as soon as he’s eligible. His 83 victories are top among active drivers by a wide margin – 27 over second-place Kyle Busch.

Johnson’s five straight titles from 2006 through 2010 constitute a record that should remain unassailable. After all, Busch is the only active driver besides Johnson who has won more than one Cup championship, and Busch’s total stands at two.

With seven Cup titles, Johnson is the equal of legends Richard Petty and Dale Earnhardt, both members of the inaugural NASCAR Hall of Fame class in 2010. With an eighth title in his final full-time season, Johnson would be without peer.

What the seven-time champ never has achieved, however, is the intense emotional connection with the broad NASCAR fan base that Petty and Earnhardt enjoyed throughout their careers.

Perhaps that’s because Johnson is all-business at his office for the weekend — the race track — where the task at hand for him is all-consuming: dialing in his race car for optimal performance. Chad Knaus, Johnson’s crew chief for 17 seasons and all his championships, insisted on a rigid race-day scheduled and kept his driver cloistered, away from irrelevant distractions.

That singleness of purpose gave the No. 48 Hendrick Motorsports team an air of invincibility and a sense of resilience from adversity that defied traditional norms. It made a seven-time champion of Johnson. But it also deprived the NASCAR fan base of a glimpse into the true character of one of the most fun-loving, affable and charitable human beings in the garage.

When, after his first championship, Johnson went for a beer-fueled joy ride and fell off the roof of a moving golf cart, only his friends were there to see it. And when the following season began, Johnson was back in the garage, buttoned-up and ready for work.

“In my eyes, I think there’s a lack of connection with me,” Johnson acknowledged with customary frankness. “I think the way I was raised, and the way opportunities happened for me — being so structured, so corporate — that’s the road I had to take.

“It created this opportunity for me, but I think it hurt a connection point with the fans… I was rewarded for sticking to the corporate message. I was rewarded, and doors kept opening when I played that corporate game just right.”

It wasn’t that Johnson was a silver-spoon driver — far from it. Born into a family of modest means, he paid his dues in motorsports, first in off-road racing, then in the lower ranks of stock car competition. After an undistinguished NASCAR Xfinity Series career that produced a single victory, he got his major break.

At the urging of NASCAR Hall of Famer Jeff Gordon, team owner Rick Hendrick took a chance on Johnson. So did sponsor Lowe’s, which backed the driver financially for 17 years. Much more comfortable in the higher-horsepower Cup cars, Johnson won three races and four poles during his 2002 rookie season and finished fifth in the final standings.

For the next 15 years, Johnson would win at least two races per season, with a high-water mark of 10 in 2007. After winning the 13th race of 2017, however, Johnson and the No. 48 team have fallen on hard times. Johnson and Knaus split in 2018, the result of a precipitous decline in chemistry between the two.

Kevin Meendering started the 2018 season as crew chief of the No. 48 team but was gone before the end of the summer, replaced by engineer Cliff Daniels, with whom Johnson is far more simpatico. Through all the changes, Johnson’s winless streak has reached 95 races.

Clearly, the seven-time champion would prefer to go out with a bang, not a whimper. That said, he’s approaching this season with different attitude, knowing it will be his last shot at a championship.

“My ultimate goal this year, and what happened through the self-awareness of the offseason, is just about being present,” Johnson said. “I’m going to get in that car, I’m going to give it a hundred percent, as I always do, and who knows what the outcome’s going to be.

“I’m going to lay it on the line and go. I’m not chasing it. I’m just going to be present and try to be me. But, absolutely, I’m out there to win an eighth championship. This is about winning races, making the Playoffs and trying to get in that final four.”

NASCAR fans likely will see Johnson in a car from time to time after this season, just not on a weekly basis.

“So kind of the culmination of Cliff’s leadership, some internal reflection, knowing what I can give and the level I want to give it, it just felt right. It just felt good and felt right to make 2020 my last full-time year.”

And perhaps that special connection with the fans will come at the culmination of his career.

“I feel that I’m now growing into a point to where I’m more comfortable to talk and openly express whatever the hell I’m feeling and not worry about it, where I was always maybe a bit reserved,” Johnson said. “And that just didn’t translate well.

“Watching Dale (Earnhardt, Jr.) come out of his shell… Thankfully, for the sport, he was always very interesting and articulate and interviewed in a way that captivated the audience. I think he’s almost had a reverse. Now, I think, to his social circles, he’s finally more open and is evolved a lot in that space.

“I’m coming at it the other way. I’ve been very evolved in my little circle of friends where I’m comfortable, but forward-facing to the cameras, to the public, I’m just becoming more comfortable in that space.”

All that’s left is for the public to understand and embrace one of the nicest guys in the garage — and one of the most talented in the history of the sport.