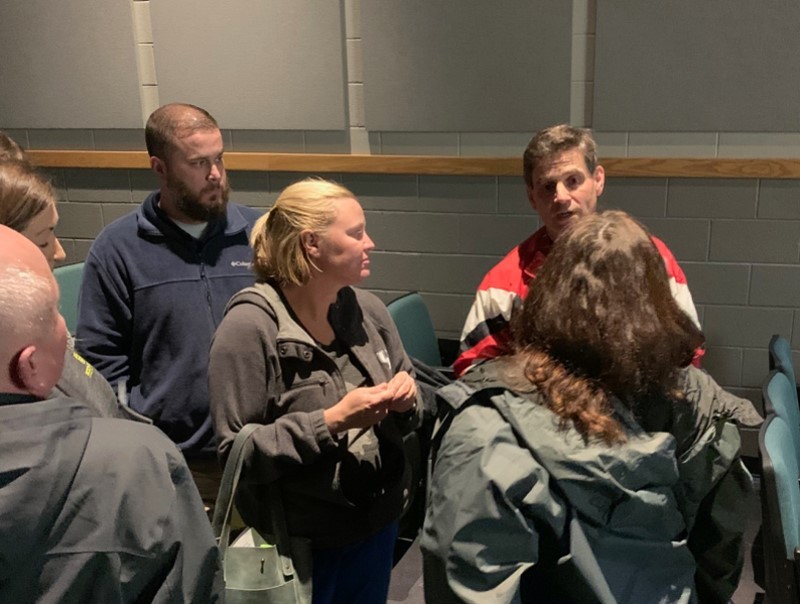 Hall County's school superintendent says he has confidence Hall County voters will approve an ESPLOST extension and bond referendum in March, but if they don't, Will Schofield says he won't quit asking; that's because financing the district's 10-year facilities plan is vital to the health of Hall County schools.

Schofield and other officials with the Hall County School District spent about an hour laying out their plan to the people who showed up Monday night for an informational meeting at Cherokee Bluff High School.

Schofield said if for some reason voters reject the measures on March 24, then his staff will make do for awhile.

"On March 25, I'd come back to work and...[Facilities Director] Matt [Cox] and his facilities group will keep up the aging facilities, and they can use band-aids and they can use duct tape and they can keep things running...and I can tell you, we'll be coming right back and asking for these referendums again," Schofield said.

Attendees also asked about an increase in the millage rate that will be levied to pay back any bonds the school system purchases to pay for new facilities. Initially, taxpayers would see an estimated increase of one mill on a school tax bill.

Stan Lewis, Director of Community Relations for the district, said the one mill is a worst-case scenario.

"Keep in mind that these numbers were worked on very conservatively," Lewis said. "We took into consideration that there would be no growth in the tax digest - but the tax digest will grow - so as the digest grows and ESPLOST revenues grow, that [millage rate] will drop."

Schofield said he believes, too, that as old facilities are replaced with new ones, the district will save money on repairs and operation, and those savings will also lower the millage rate for taxpayers.

One of the new buildings on the facilities plan is a new free-standing Cherokee Bluff Middle School. Currently, the middle school shares a building with Cherokee Bluff High School. The schools are located on the Highway 211 corridor, which is currently the main area of growth in the county.

CBHS Principal Wes McGee said he's seen evidence of growth in the two years the high school and middle school have been open, so he knows they'll need more space.

"There are two subdivisions coming up just down the street, and the subdivision I lived in, house are going up and as quick as they're built, they're being sold," McGee said.

Despite torrential rains Monday night, some 40 people showed up for the informational meeting at CBHS, the largest turnout of the three meetings that have been held to date. Four additional meetings are scheduled ahead of the March 24 vote. See the dates and locations in the box below.

To see the information that's being shared at each informational meeting, follow this link.