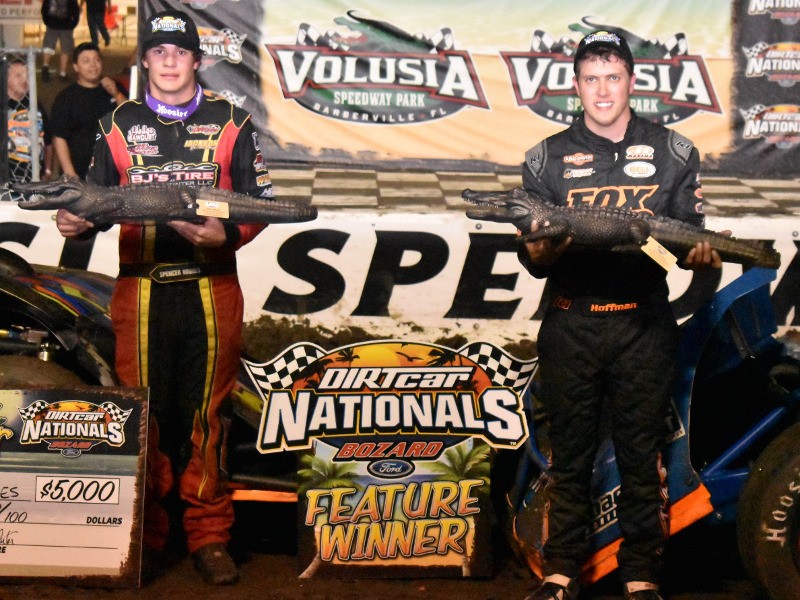 BARBERVILLE, Fla. - On a night when Nick Hoffman and Kyle Strickler were expected to go wheel-to-wheel for the biggest UMP Modified prize in Florida, it was 19-year-old Spencer Hughes who stunned them all.

A last lap pass by Spencer Hughes on a green-white-checkered finish gave him the Gator Championship race win on Monday in the DIRTcar Nationals at Volusia Speedway Park in Barberville, Florida.

Hoffman and Strickler, who each won their qualifying races over the weekend, wound up starting side-by-side in row five. Polesitter Jason Hughes charged out early with Spencer Hughes giving chase.

A wild incident on lap 21 saw Strickler and David Stremme try to squeeze through a tight gap between Michael Altobelli on the bottom of the track and the slowing car of Tyler Nicely at the top. Strickler got the worst of it when he made heavy contact with Nicely, damaging his front end so severely he was ultimately forced out of the race.

The feature went green nearly the entire remaining 21 laps, but the caution flag waved again just as Jason Hughes had his eyes on the checkered flag coming off turn 4. On the ensuing green-white-checkered finish, Spencer Hughes swept past Jason Hughes and held on to win the $5,000 Gator Championship race.

The event concludes the UMP Modified portion of the DIRTcar Nationals. Hoffman survived with a severely beat up car to finish fifth, which was enough for him to clinch his fifth consecutive DIRTcar Nationals UMP Modified Championship thanks to his two victories and six top-five finishes in six nights of racing.

“We had a really good week,” said Hoffman, of Mooresville, North Carolina. “I think I jinxed myself today as we hadn’t used our spare nose all week, then we wiped it out on the last lap of the whole week. It was very eventful tonight, though. Definitely not the way we wanted it to go. Starting tenth, I probably had the best car to win the race but wasn’t able to show it. Then we bit the front-end early running into Kyle (Strickler) and then it wasn’t steering like I needed it to, so we just tried to stay out of trouble.”

For the first time in this year’s event, Dirt Late Models hit the track with Brandon Sheppard picking up right where he left off at the 2019 DIRTcar Nationals – in victory lane.

Sheppard, who won the final four nights of last year’s event, dominated the kickoff to Late Model Week at the DIRTcar Nationals, leading an all-Illinois podium with Brian Shirley in second and Dennis Erb, Jr. in third.

Sheppard, of New Berlin, Illinois, was smooth on three restarts from cautions, never allowing anyone to rattle him as he pursues his second straight DIRTcar Nationals championship this week.

The DIRTcar Nationals continues on Tuesday night with the Super DIRTcar Series joining the DIRTcar Late Models, who will compete in their second night of competition.