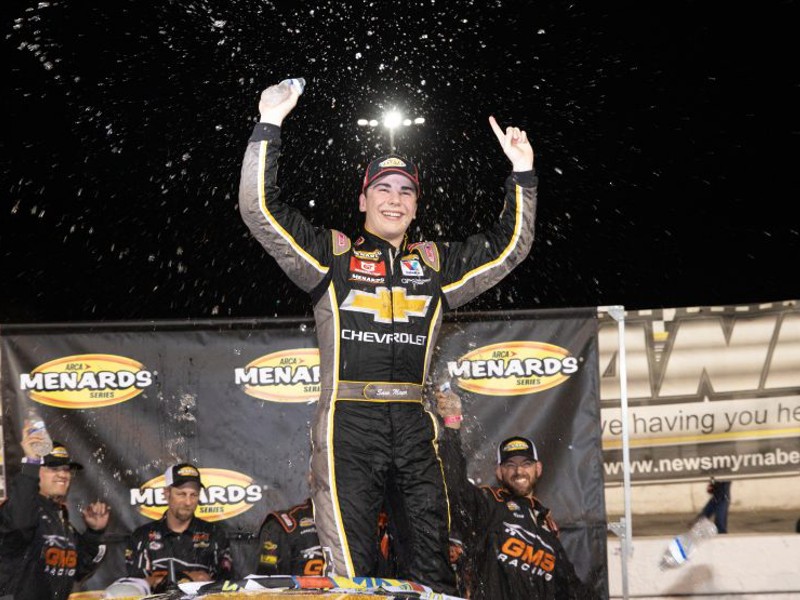 It’s Mayer’s fifth career series win, and comes one year after his fourth-place finish in the 2019 season opener.

“He (Gibbs) drove me up the race track pretty good there, so I was like ‘I’m not gonna take that,’ so I gave it a little bit back off turn 2, was able to get to the inside and drive away from there. I think he used his stuff up a little too early which gave us the lead.”

Mayer wasn’t shy on the aspirations of his GMS Racing team. With an eight-race schedule for the series this season, they have their eyes on winning every single race.

“I mean, we’re looking forward to that. That’s what I’m trying to do,” he said. “This year is going to be a lot harder than last year. It’s a very long shot, but we’re one for one right now.”

Although Mayer was the one who left with the checkered flag and trophy, Derek Griffith and Chad Bryant Racing stole the show.

Making his first career series start, Griffith, a super late model ace, led over the first 120 laps from the pole and had the quickest car throughout the event. During a late caution, he pitted for tires and fuel, but was penalized for pulling up to pit and was forced to start at the tail end of the field.

Griffith and CBR slowly, methodically worked their way back through the pack and wound up challenging for the lead in the final laps.

But time ran out, and Griffith had the settle for second.

“We started with a blistering pace, and I really didn’t even have to use that car up one bit,” he said. “We really, really had an excellent car tonight. That Chad Bryant Racing team worked their butts off these last few days. They got that thing dialed in perfect. Ive learned so much the past two days.”

Working with Paul Andrews, Alan Kulwicki’s championship winning crew chief, Griffith looked back on the pit road penalty as the determining factor. If he didn’t have to come through the field, he believes he would’ve had a better chance at the victory.

“Definitely hurts a little,” he said. “We’re gonna definitely look forward, hopefully get another shot in this car, get to race a little more. I hope someone sees it and thinks I deserve it, we definitely need the help. Just such a cool weekend.”

The next race for the ARCA Menards Series East will take place at Five Flags Speedway on Saturday, March 14.