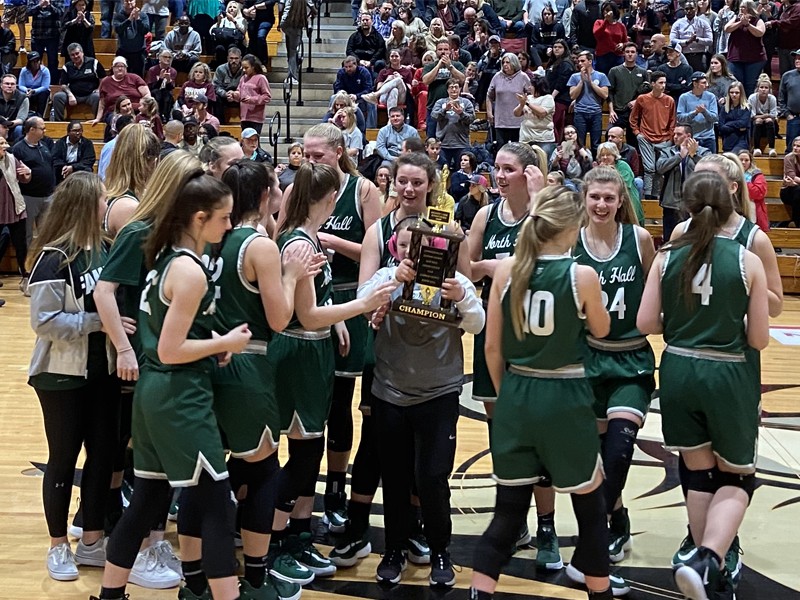 RABBITTOWN — It was a movie North Hall fans, and coaches, had seen all too often. The Lady Trojans build a big lead over powerhouse teams like Hart County and Greater Atlanta Christian only to see it dwindle down the stretch into a close loss.

So when the Lady Trojans took a 42-28 lead over GAC moments into the fourth quarter on a Maci Gillespie dribble-drive, the raucous ovations didn’t take long to turn to worried doubts. And almost on cue, the Lady Spartans began their march back.

However, North Hall coach Kristi House and crew pulled out an alternate ending at just the right time. Grace Hollifield hit a pair of free throws with 6 seconds left and Lauren Swanson blocked a Lady Spartans shot at the buzzer to help the Lady Trojans pull off a 49-48 thriller Monday night in the Region 7-3A final at the East Hall gym.

The last-second theatrics came after GAC stormed back with a 20-5 run, capped by a free throw from Kaleigh Addie for a 48-47 lead with 16 seconds left. Addie, the Co-Player of the Year in Region 7-3A, had 11 of her game-high 23 points in the fourth-quarter comeback.

“That’s about as hard a way to do it as you can get,” House said. “But yea, we’ve seen that kind of an ending way too many times. Grace and Maci were huge there at the end and I thought our defense was the real key.”

It was the first region title for the Lady Trojans (20-8) since 2012 and avenged a pair of losses to the Lady Spartans (15-12) during the regular season. It also could be just the spark they need as they embark on the Class 3A playoffs with a critical No. 1 seed.

“I’m hoping this will catapult them to a deep run in the state tournament,” House said. “This senior class is a special group and means a lot to me and to the community.”

In the early going, GAC rolled out to a quick 14-3 lead as North Hall missed 6 of its first 7 3-pointers. But the Lady Trojans finally got on track behind Hollifield, who poured in 7 points in a 16-0 run to reclaim the lead 19-14. GAC tied the game once at 24 before Maci Gillespie gave North Hall a 26-24 halftime with a layup in the waning seconds.

The defense then took over as North Hall used a 14-4 third quarter to roll out to a 40-28 lead before the Lady Spartans stormed back. For Hollifield, who had missed a pair of free throws in the final minute with a chance to pad a lead, it was a chance at redemption.

“I went up there thinking ‘I can’t miss anymore. I have to make these,’” said Hollifield, who finished with a team-high 14 points and 5 rebounds. “It just feels so good to finally get that (region) title.”

Gillespie was instrumental throughout harassing the GAC offense on the defensive end and finding the open shooter on the other. She finished with 12 points, 3 rebounds, 7 assists, and 2 big steals.

“Maci means so much to us out on the floor,” House said. “She’s the leader and makes things happen on offense and is so tough on defense. Defense is what wins games in the playoffs and to have her out there doing her thing will be big for us.”

Swanson poured in 13 points to go with 5 rebounds for North Hall.

The Lady Trojans will open the Class 3A playoffs on Friday at home against Region 5-3A No. 4 seed Pace Academy.

The Tigers outscored GAC 12-5 in overtime to claim their second consecutive Region 7-3A title.

For first-year head coach Eric Herrick it was a satisfying ending to the regular season. And a great jump-start into postseason play.

“I took this job as a challenge and these guys just go out and make plays and make (the coaches) look good,” Herrick said. “To have a close game and to handle the pressure down the stretch I think will be good for us.”

Dawson County (25-2) wasted little time in looking like it was ready to run the Spartans out of the gym. Mason Barnes scored seven of the Tigers’ first nine points in a variety of ways, Jasper Gibson hit a long 3-pointer, and a Max Tierney basket put the finishing touches on a dominating 18-6 first quarter.

The onslaught didn’t stop there as Campbell Reed hit a pair of jumpers and another Gibson trey pushed their lead to 30-11 midway through the second quarter.

But the GAC (20-8) defense adjusted to try and take the dribble-drive away from Barnes and the Tigers. That sparked an 11-0 run to close out the first half.

From there it was a race to the finish. The Spartans opened the third quarter with a 5-0 run. Dawson answered with a 13-4 spurt, capped by a pair of Eli Burruss stick-back baskets, for a 43-31 lead. GAC then really caught fire behind Josh Fulton, who scored 7 points, including a 3-pointer with a defender in his face, to ignite a 17-6 run for a 48-47 lead, their first since 2-0 to open the game.

“GAC made a good defensive adjustment on us and it took us a while to figure things out,” Herrick said. “They are a different team (with Fulton) and we knew this was going to be a much closer game than the first two.”

The teams traded the lead three times with Dawson County retaking the lead 56-55 on a Reed 3-pointer. Gibson pushed it to 58-55 with 25 seconds left. But Fulton was fouled on a 3-point attempt with 17 seconds left and hit all three free throws to send it to overtime.

Dawson County never trailed in the extra period scoring the first seven points as Campbell scored on a jumper, Brody Howell scored inside off a Reed assist, and Barnes drained a pair of free throws for a 65-58 lead with just 56 seconds left.

Reed and Gibson, who were named as Region 7-3A Co-Players of the Year, combined for 36 points. Barnes finished with 17 and Burrus had 13 in a balanced attack.

Fulton and Lamarr Randolph each had 17 points to pace GAC.

Dawson County will play host to Cedar Grove on Saturday in the first of the Class 3A tournament.

A Jason Evrett basket gave the Bears the final of six lead changes over a wild three minute stretch in the fourth quarter as the Bears held on to earn the No. 3 seed from Region 7-3A.

But the Trojans (18-9) stormed back with 3-pointers from Clark Howell and Luke Gunter to pull within 66-64 with 28 seconds left. With the Bears missing the front end of a pair 1-and-1 attempts the Trojans had three possessions with a chance to tie or take the lead.

North Hall missed a pair of 3-pointers and the Bears’ Dre Raven sealed the game swiping a North Hall inbounds pass with 6 seconds left and converting a layup at the buzzer for the final score.

Bosko Norman had a huge game for Cherokee Bluff pouring in 21 points, including 14 in the second half. Cade Simmons added 12 points and Griffin Neville had 10 for the Bears.

Howell and Luke Gunter both had a big games for North Hall with 20 and 19 points, respectively. J.T. Fair, Samir Huerte, and Luke Volle each had 7 points for the Trojans.

In the upcoming Class 3A playoffs, Cherokee Bluff will travel to Westminster and North Hall hits the road against No. 1 Pace Academy in the first round.

The Lady Tigers got off to a slow start and never recovered as they fell to Lady Rebels for the third time on the season in the consolation game.
Fannin County jumped on Dawson County quick leading 19-7 at the end of the first quarter. The Lady Tigers clawed back into the game cutting the lead to 31-22 by halftime. But they could not get any closer than four points for the rest of the way.
The Lady Rebels outscored Dawson County 23-20 in the second half to hold off any comeback attempts.
Marlie Townley had 19 points to pace Dawson County. Maddie Anglin added 12 points and Sophia D'Oliveira had 10 for the Lady Tigers (14-13).
Dawson County will hit the road to take on Cedar Grove on Friday in the first round of the Class 3A tournament.