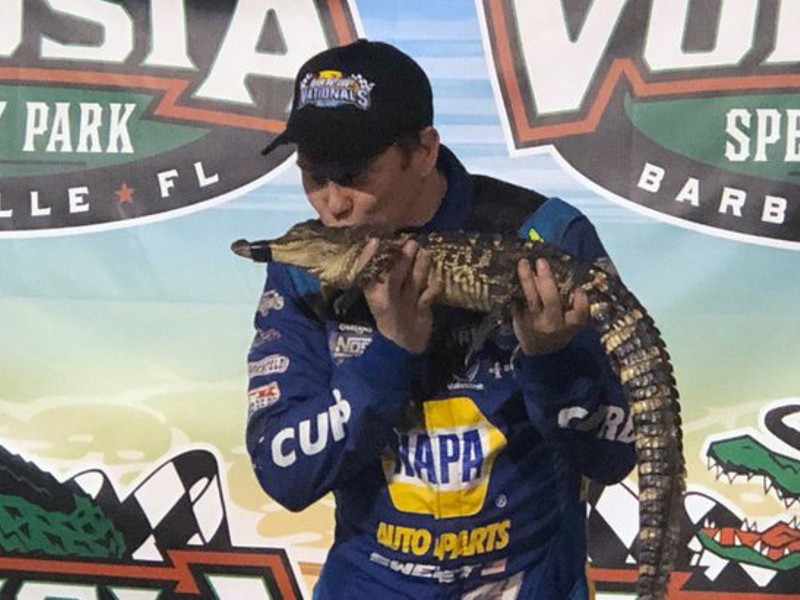 It took Schuchart, of Hanover, Pennsylvania, just one lap to slide past Daryn Pittman and pull away with the lead. Pittman gave chase before Cory Eliason darted past Pittman and set his sights on Schuchart. But with one lap to go, Eliason’s motor went up in smoke creating a green-white-checkered finish.

“It was a lot of fun,” said Sweet, who said he’s going to spend the rest of the week at Disney World with his wife and daughter. “I thought we had a lot of different tracks all week. The NAPA car was fast on all the different conditions, but we’ll take that.”

In other action, a split DIRTcar UMP Modified field running a qualifier for Monday’s $5,000-to-win Gator Championship event saw Kyle Strickler win for the seventh time of his career at Volusia and the second time in the past five days.

Strickler had opened a sizable advantage when the caution flew with one to go, bunching the field, but also giving him clear track. Strickler quickly powered back off the corner as Tyler Nicely tried to stay with him to no avail. Nicely wound up second with NASCAR Xfinity Series driver Justin Allgaier in third.

Action in the DIRTcar Nationals at Volusia Speedway Park continues on Monday with the DIRTcar Late Models competing in the first of two nights, while the DIRTcar UMP Modified will run their Gator Championship event.