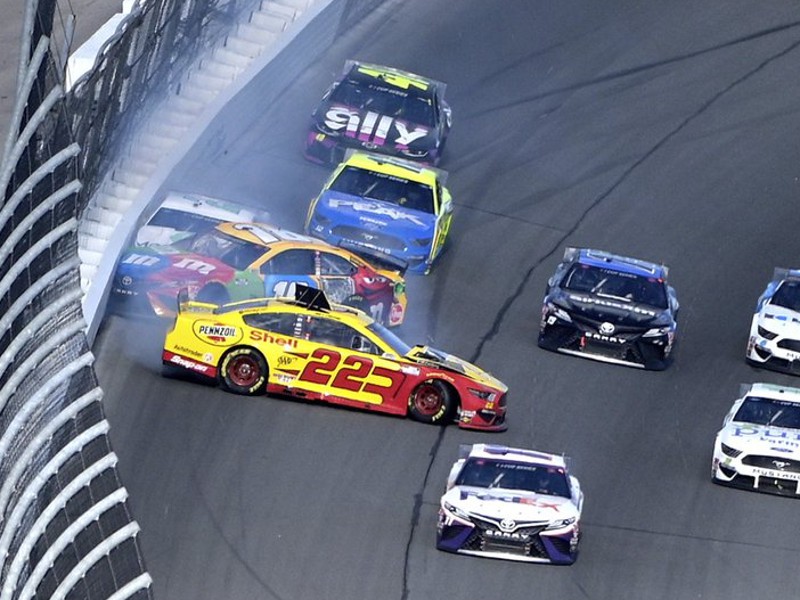 DAYTONA BEACH, Fla. - It was a relatively calm but unmistakably race-y start to Sunday’s Busch Clash at Daytona International Speedway, but by the last of three overtimes were complete, the garage area was littered with bent-and-dent race cars and some equally banged-up feelings.

Jones had plenty to smile about, but several of his competitors were certainly less than thrilled about their race day including Team Penske teammates Brad Keselowski and Joey Logano.

Logano and two-time Cup Series champion Kyle Busch were involved in a collision on lap 66 at the front of the field that collected Keselowski, who was running just behind them – and three other cars who were able to continue.

Busch and Keselowski’s cars suffered enough damage that they could not return to the race. In fact, as soon as the 2012 Cup champion Keselowski climbed out of his car near Turn 4, he threw his hands up in the air in pure frustration. He led a race best 33 laps only to finish his afternoon in the speedway’s infield care center.

“Just got wrecked for no reason; just dumb, dumb racing, just dumb moves being thrown out there,” Keselowski said after emerging from the medical center. “Guys that don’t know what they’re doing throw crazy blocks and it’s just ridiculous. We shouldn’t be wrecking all these cars.

“This is just dumb. We had a good car, my Alliant Ford was capable of winning the race, led a lot of the race. We were in good position to finish it off and got destroyed for no reason.”

Asked if he wanted to address the situation with anyone following the race, Keselowski deferred, “I’m going to Disney World tomorrow.”

Busch was also disappointed in the outcome. But he seemed to concede the afternoon’s frustration level was an entirely expected possibility – the perfect storm of close-quarter competition so frequently forecasted at the big tracks such as Daytona and Talladega Superspeedway.

“We were better than those guys I feel like and we had better handling,” Busch said of his attempt to pass the leader Logano just before the accident.

“Looked low on the 22 (Logano) and he came down to block me there. And I went high and he drove all the way up the hill in front of me. So I was like, okay now I’m going back down. I didn’t know Denny was already alongside of me so when I did that didn’t know how much room I had.

Logano was able to continue despite some damage on his car. He avoided a massive 10-car pileup on the front-stretch on the ensuing restart. But he was collected again in an 11-car overtime incident in turn 4 that resulted in a 7:27 red flag stoppage of the race.

Asked about the first incident at the front of the field with Busch, Logano cast it as typical Daytona racing.

“Kyle had a run, I blocked it to the bottom,” Logano said. “I blocked him back at the top.

“Thought I did a good job blocking and he just got to the inside of me and there really wasn’t a hole and it just hooked me around. So that was the first crash. Then they wrecked on a restart and we didn’t really hit anything on that one. The last one, Denny blew a tire and dang it, I almost made it through. I needed about three more feet.”

Asked about his teammate’s frustration, Logano offered a smile.

“I’m going to Disney World too, so I’ll see him there,” Logano said. “I’m sure he’s all right. We get along fine.”