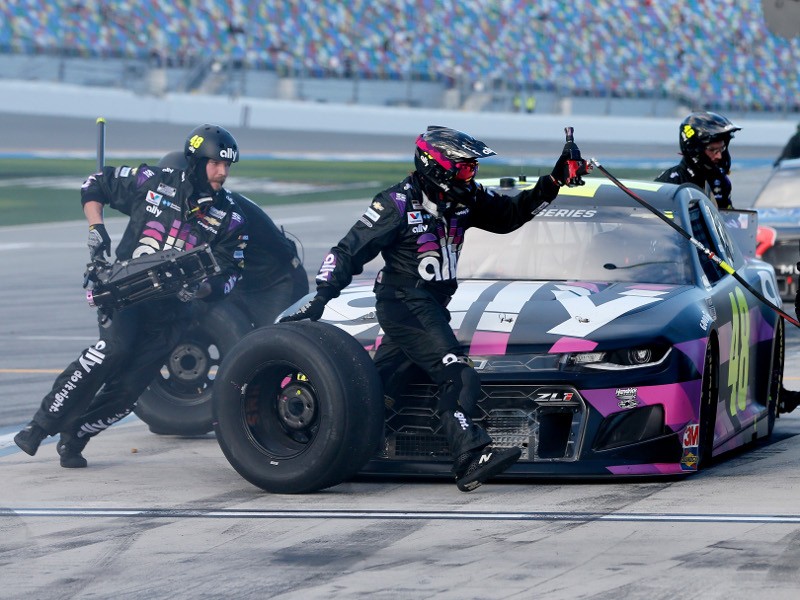 DAYTONA BEACH, Fla. - Jimmie Johnson ran three times on Sunday, but only two of the occasions involved his No. 48 Hendrick Motorsports Chevrolet Camaro.

Before Daytona 500 time trials, which started at 12:30 p.m., Johnson ran the Daytona Beach Half-Marathon, which starts on the tri-oval at Daytona International Speedway and ends 13.1 miles later after a run to the sands of Daytona Beach.

“Yeah, I ran the Daytona Half Marathon this morning which is always a great event,” said Johnson, whose takes his fitness training seriously. “And it’s certainly one to weigh on my mind as I’m eating all the Christmas candy and holiday things that we do, knowing that there’s a half-marathon out there for me and keeps me a little more honest and in shape. So, it was a fun day today.”

Next Sunday’s Daytona 500 will be Johnson’s last as a full-time NASCAR Cup Series driver. Understandably, the seven-time champion feels a tug between nostalgia and the job at hand.

“It’s a balancing act,” Johnson acknowledged. “I want to soak it in, but I’m just wired to race. I want to win races, and I want to be a championship threat. So I’ll try to figure that out as the year goes on. Things are pretty casual this first week here in Daytona.

“As we get to the 500 and the races that follow, I’m sure I’ll gravitate more toward the work side and the performance side of life. But I’m just thankful to be here. It’s been a heck of a run, and I’m very excited to start my final full-time season.”

Logano had taken the lead on lap 59 and was attempting to block a run from Kyle Busch seven laps later. As Logano moved down the track, the nose of Busch’s car tapped the left side of Logano’s rear bumper, turning Logano.

With his lane blocked at the top of the track, Keselowski drove into the wreck. Ultimately, Keselowski climbed from his mangled No. 2 Ford and slapped the side of a waiting ambulance in disgust before climbing in for his mandatory ride to the care center.

After his release from the medical facility, Keselowski minced no words in placing blame for the incident. Was it Logano’s fault?

Told that Keselowski was annoyed with his blocking tactics, Logano had a facile response.

“Apparently we all suck at this, ‘cause there are only like three cars left right now, so I wouldn’t say anyone was really good,” Logano said.

Keselowski, at least, was correct in his prediction. Erik Jones won in a Toyota.

Daniel Suarez Must Fight For His Spot In Daytona 500

Daniel Suarez is living proof that the best-laid plans can sometimes go awry.

After losing his ride at Stewart-Haas Racing, Suarez signed on with Gaunt Brothers Racing for the 2020 season. The Mexican driver opted to forego the spot he had earned in Sunday’s Busch Clash at Daytona to concentrate on his Daytona 500 effort.

The strategy didn’t work. Suarez was 36th among 43 drivers and failed to secure one of two spots available to non-chartered cars on speed. Those positions went to Justin Haley and Brendan Gaughan who were 31st and 33rd fastest, respectively.

Accordingly, Suarez will have to race his way into the Great American race in the first of two Bluegreen Vacations Duels on Thursday night. That means he’ll have to beat Haley, Reed Sorenson (34th qualifier) and Chad Finchum (41st) if he hopes to race next Sunday.

“We have to race,” Suarez said. “We have to race hard. We knew that we would have a lot of challenges and that we didn’t also have the raw speed, but I know what I can do. I just have to go out there Thursday and get it done.”

Suarez and the Gaunt team had made the decision to skip the Clash before arriving at Daytona. But they were surprised in Saturday’s two practice sessions that the No. 96 Toyota wasn’t up to speed in single-car runs — though the car was able to keep up in the draft with the other Toyotas.

“That was really the main goal, to focus on the Daytona 500 car,” Suarez said of the decision not to race in the Clash. “Obviously, we just didn’t do enough of a good job, but we have to push hard, and we have to keep working and try to keep up. I know that… obviously, we all know that the car doesn’t have the raw speed that we were expecting. We all were pretty shocked (Saturday) to see that, but I know what I can do, and I know that I’m fast. I think we’ll be in good shape on Thursday. We just have to stay out of trouble.”