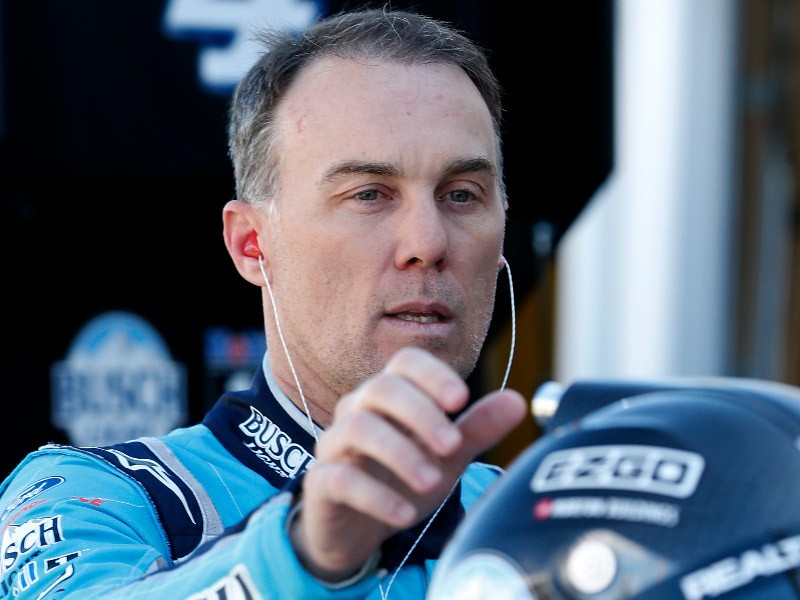 DAYTONA BEACH, Fla. – Kevin Harvick will be pushing 50 before he retires from full-time NASCAR Cup racing, reporters learned Saturday during a question-and-answer with the driver of the No. 4 Stewart-Haas Racing Ford Mustang.

A two-year extension will keep the 2014 Cup champion in the car through the 2023 season. Harvick turned 44 on December 8.

Until recently, conventional wisdom had Harvick migrating to the television booth after his driving career. The desire for more family time and curiosity about NASCAR’s Next-Gen Cup car, however, have prompted a cutback in Harvick’s broadcasting schedule, including his exit from his Wednesday show “Happy Hours” broadcast on SiriusXM NASCAR Radio.

“There are a number of things that went into those decisions,” Harvick said on Saturday in the Daytona International Speedway Media Center, site of Sunday’s Busch Clash. “First and foremost, Wednesday’s just don’t work very well for me with (son) Keelan, with picking him up from school and going to events and activities and things after school.

“He didn’t really like it. It frees up another day for me. That was a piece of the equation. The other piece was that in order to do that stuff right, it isn’t just the show. It is the production meetings and the time, and you have things coming up from a development standpoint that are going to take a lot of time at the end of the year to get prepared for 2021 from a testing standpoint.”

The new Cup car is an enticing proposition for Harvick, but that doesn’t mean he will abandon his broadcasting plans indefinitely.

“For me, I am intrigued by that (breaking in the new car),” Harvick said. “For me, that will keep me in the car for a few more years as we go through 2023, and then we will see where we are at. That timing works well for me from a media standpoint, just because of the fact that you have a TV contract coming up (at the end of 2024) and will know who the players are, and I think at that particular point you will have a fair amount of experience in the new car and will hopefully have been through the engine change, the vehicle change.

With few holes left on his racing resume, reigning NASCAR Cup champion Kyle Busch eyes the Daytona 500 as the top item on his bucket list.

With 56 victories and two championships in NASCAR’s premier series, Busch is second among active drivers to seven-time champion Jimmie Johnson in both categories. But winning the Great American Race as a feat still to be accomplished for the driver of the No. 18 Joe Gibbs Racing Toyota Camry.

“It’s always kind of been up there near or at the top,” Busch said. “It certainly still is. It would be nice to get that box checked, and hopefully, one of these days we can figure that out. It would be nice if it’s a week from (Sunday).”

Another title would suit Busch, too. When Johnson retires from full-time Cup racing, Busch will be the only active driver with multiple championships, unless another duplicate winner emerges this season.

“It’s kind of odd that there’s only a two-time guy out there,” Busch said. “Everybody else is zero or one. It just kind of shows you the influx of newer, younger drivers and just how many of those guys that have won championships are now gone.

“The Tonys (Stewart), the Jeffs (Gordon), the Jimmies (Johnson) that no longer are here. Hopefully, it’s three (championships). I might could be the only one.”

Though he’s excited to get back into the No. 48 Hendrick Motorsports Chevrolet Camaro to start a new NASCAR Cup season, Johnson must process the realization that the 2020 season will be his last as a full-time driver and his last chance to win a record eighth championship.

“Coming down here, I obviously know this is my last full-time season,” Johnson said on Saturday at Daytona International Speedway. “So there were mixed emotions. But I’m excited to start my final year. To know that (sponsor) Ally is on board, Hendrick Motorsports getting the team where it is, I really feel like we have an opportunity to have a strong year on track and go out in style, with the goal of the ultimate prize.

“I’m really excited about that. Once I got in the car and on track, that stuff is all out the window and it’s really about working on the race car and trying to make it go. I’m excited to be here. I know the year is going to evolve and change for me from start to finish and my emotions with what goes on. But I’m in a very good place right now — just ready to go.”

Johnson is the defending winner of the Busch Clash at Daytona. Little did he know, however, that when he took the checkered flag under caution in that exhibition race that the 2019 season would bring a change of crew chiefs — from Kevin Meendering to Cliff Daniels — and extend his career-worst drought in Cup points races from 59 to 95 races.

Johnson is eager to race in the Clash, not just for the trophy, but for the experience it will bring.

“We don’t have a chance to test, so a lot of us haven’t been in a Cup car, except for the guys that did the 2021 (test) stuff,” Johnson said. “So two drivers of the 40 have been in a race car since Homestead. Now more than ever (the Clash) is very useful.”