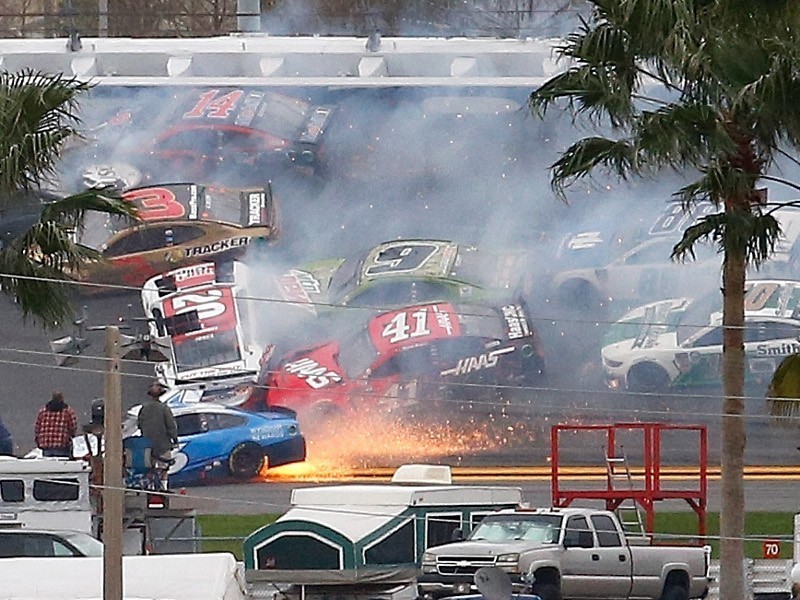 DAYTONA BEACH, Fla. – On the heels of a busy off season, NASCAR’s very best arrive in Florida this week for the official start to the 2020 season at Daytona International Speedway on Sunday.

NASCAR Cup Series drivers take to Daytona’s high banks with pole qualifying for the Daytona 500 followed by the Busch Clash, a 75-lap sprint race featuring the series’ biggest names contending for the first non-points paying trophy of the year.

It’s the traditional kickoff to the Feb. 16 season-opening Daytona 500, which, this year, features seven-time champion Jimmie Johnson in his last full season while welcoming a talented rookie trio – Tyler Reddick, Cole Custer and Christopher Bell – expected to impress from the drop of the green flag.

First up, however, is the traditional all-out, trophies-or-wreckers sprint race, the Busch Clash – a 75-lap race among 18 drivers eager to hoist the first race trophy and send a strong message about their team’s competitive bidding.

Johnson earned his second career Busch Clash victory – and first since 2005 – in last year’s race, a dicey affair that provided all the bold moves fans have come to expect in the opening competition at Daytona. It was the first time the future Hall of Famer had hoisted any trophy since his June 2017 regular season win at Dover. And Johnson definitely had to earn the hardware.

Pole sitter Paul Menard led the first 51 laps of the race and with menacing dark clouds hanging over the speedway, all the crews on pit road knew a Florida afternoon rain shower was on the way. Johnson’s No. 48 Hendrick Motorsports team decided it was time to make a move and the champion dove low on lap 52 to get around Menard. The two made contact and Menard spun out, collecting many cars in the field.

Johnson motored on and led three more laps before NASCAR called the race because of the weather. Johnson celebrated in Daytona’s famed Victory Lane for the first time since winning a Duel qualifying race from the pole position in 2015.

“Knowing the rain was coming – we could see it coming – and I knew that was probably my lap to make the move,” Johnson said. “I had a great run down the back. I got below him (Menard) before he blocked it, and then he came down a little bit, I think to defend and block.”

Johnson later acknowledged what that win meant and the positive effect it had the following Sunday when he finished ninth in the Daytona 500.

“You know, points races are different, but we’ll take this,” Johnson said after winning the Busch Clash.

Hamlin’s Joe Gibbs Racing teammate, 2019 NASCAR Cup Series champion Kyle Busch, last won the Busch Clash in 2012 and says he’s eager to get the defense of his title off on the right foot. He’s already got a start at Daytona International Speedway this year, running IMSA’s Rolex 24 race two weeks ago.

“I think, anytime we ever go down to Daytona, whether it’s with a new car or whether it’s with a different rules package or what have you, we always look at the Clash as a race to watch to see exactly what’s going to happen and what characteristics you have in your race car,” Busch said. “It’s a learning experience for everybody, whether you’re in the race or whether you’re out of the race. For us, we’re curious to see how it’s going to handle and what it’s going to react like.

“I’m just looking forward to getting back to Daytona to my day job with our M&M’s Camry.”

There have been two common distinguishing marks of the annual Daytona 500 pole qualifying in recent seasons: Chevrolet and Hendrick Motorsports.

The Hendrick team would no doubt love to land the season’s most-coveted pole award for seven-time champ Jimmie Johnson, who is retiring from fulltime competition at the end of the season. It would be a great way to bookend a championship career considering Johnson won the Daytona 500 pole in his first try, his 2002 rookie season.

In fact, rookie drivers have done very well in qualifying for the Daytona 500 as of late. Danica Patrick (2013), Austin Dillon (2014) and Chase Elliott (2016) all won the pole position in their first tries. That’s half of the rookie pole winners in the race’s storied history.

Johnson is the only driver entered this week to win multiple Daytona 500 pole positions (2002 and 2008). There are only five other former Daytona 500 pole winners in the field this year – Dillon, Elliott, Bowman, Byron and Martin Truex, Jr.

The last time a driver won the pole position and the race was 2000 with NASCAR Hall of Famer Dale Jarrett. The 20-year gap marks the longest time in Daytona 500 history between pole-winning victories in the big race.

NASCAR Cup Series
Next Race: The Busch Clash
The Place: Daytona International Speedway – Daytona Beach, FL
Defending Winner: Jimmie Johnson, (Hendrick Motorsports)
The Date: Sunday, Feb. 9
The Time: 3 p.m. ET
TV: FS1
Radio: MRN, SiriusXM NASCAR Radio
Distance: 187.5 miles (75 laps)
What To Watch For: Johnson earned his second career victory in the 2019 Busch Clash, his first since 2005. … Johnson now joins an elite list of three current competitors with multiple wins in the race. Denny Hamlin and Kevin Harvick are three-time winners of the race. …Hamlin has led the most laps (142) in this race among the drivers entered this year. Dale Earnhardt, Jr. holds the record for laps led in the Clash at 149. … Chevrolet leads all manufacturers with 21 wins. Ford has nine and Toyota has four. …In 2009, 14 drivers led a lap in the race – the most leaders in the event’s history. … Seven times the winner of this race led only one lap – the last time that happened was in 2009 when Harvick won. …The closest margin of victory in the Busch Clash is .013-seconds. It happened in 2012 when Kyle Busch edged Tony Stewart for the win. …The most lead changes in a race is 28 (2011). …Only six times in history has the winner of the Busch Clash also gone on to win the Daytona 500. Hamlin is the last active driver to do so (2016). Dale Jarrett (2000) was the previous. … Four drivers have won the Busch Clash and the Cup Series championship in the same year – Tony Stewart (2002), Jeff Gordon (1997), Darrell Waltrip (1981) and Dale Earnhardt – a record four times, 1980, 1986, 1991 and 1994. … Five times a driver has won the Busch Clash in his first try – Bobby Allison (1982), Bill Elliott (1987), Dale Jarrett (1996), Jeff Gordon (1997) and Denny Hamlin (2006). … Jimmie Johnson will be making his 17th start in the Clash – the most starts among this year’s field. Mark Martin holds the record with 24. … Jeff Gordon holds the record for most consecutive appearances in the Clash – 22; 1994-2015. … Only four times has the Busch Clash been won from the pole position – Hamlin’s 2014 win was the last. …… The winningest starting positions are – 2nd, 13th and 15th – all have produced five wins each. …Five times the Busch Clash winner led only a single lap – the last time that happened was 2009 with Harvick’s last-lap pass. … The late Dale Earnhardt won this race a record six times. No other driver has won more than three. … Richard Childress Racing and Joe Gibbs Racing boast the all-time record for wins (eight) for a team. … Newly inducted NASCAR Hall of Famer Buddy Baker won the very first Busch Class in 1979 with an average speed of 194.385 mph. …. Paul Menard holds the record for leading the most laps without winning. He led 51 of 59 laps last year but finished 13th in the rain-shortened event.