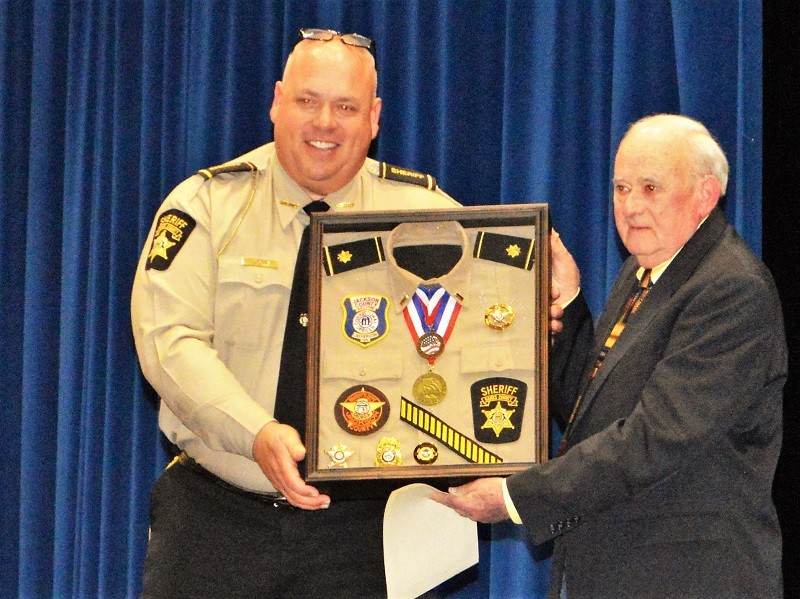 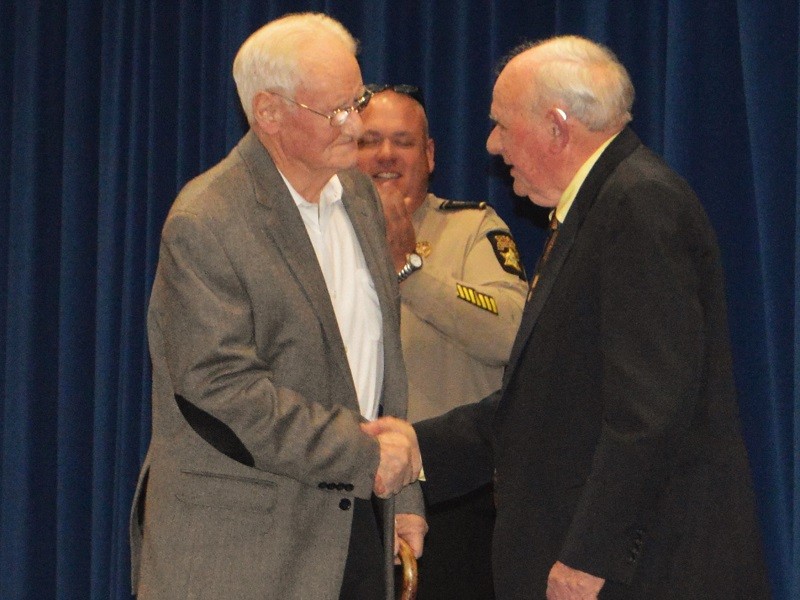 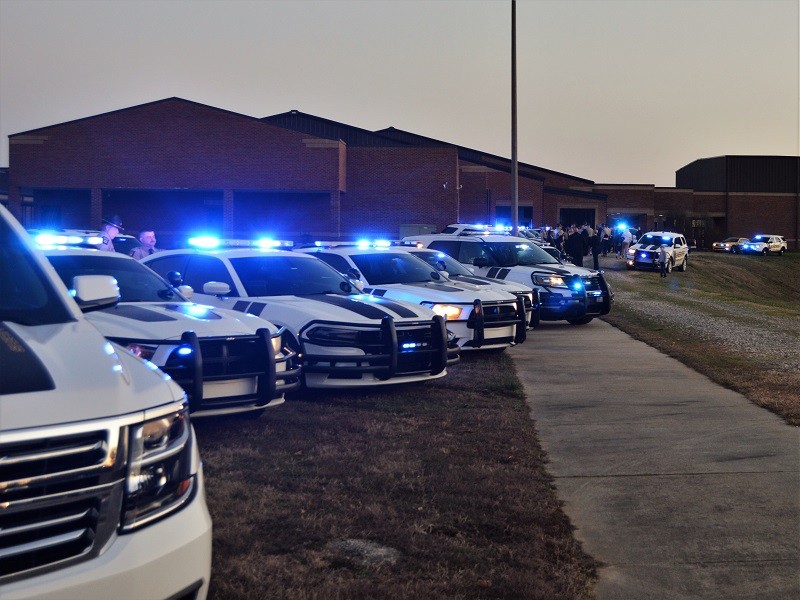 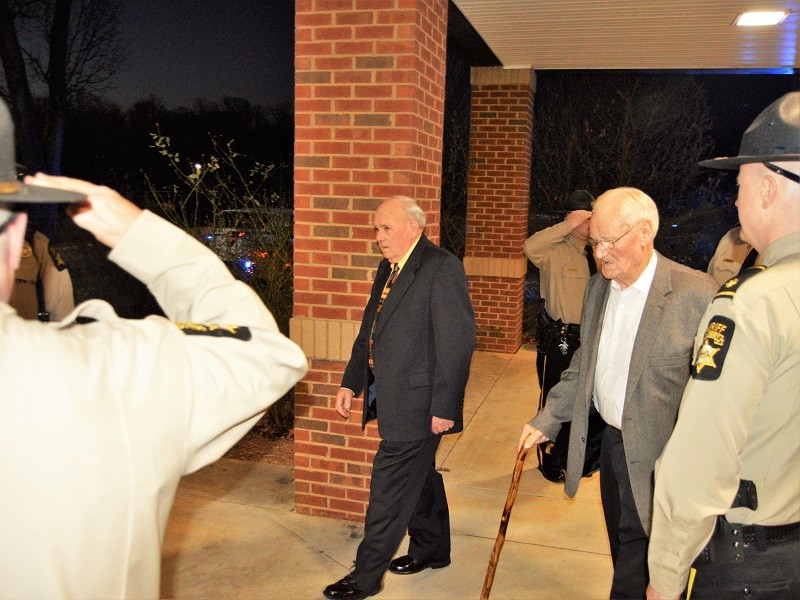 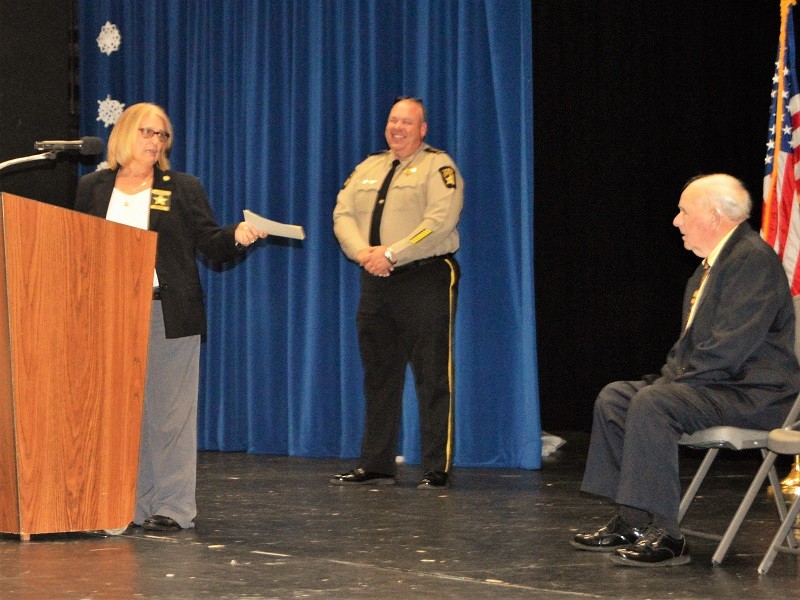 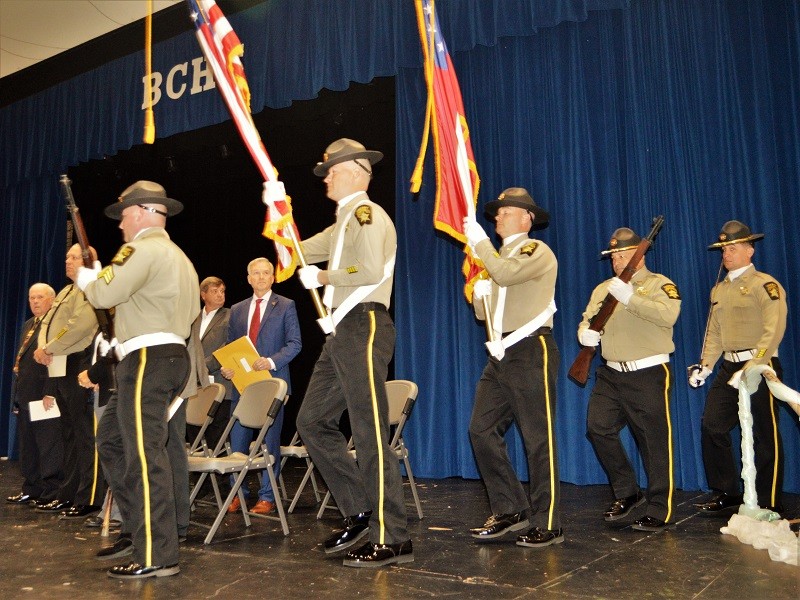 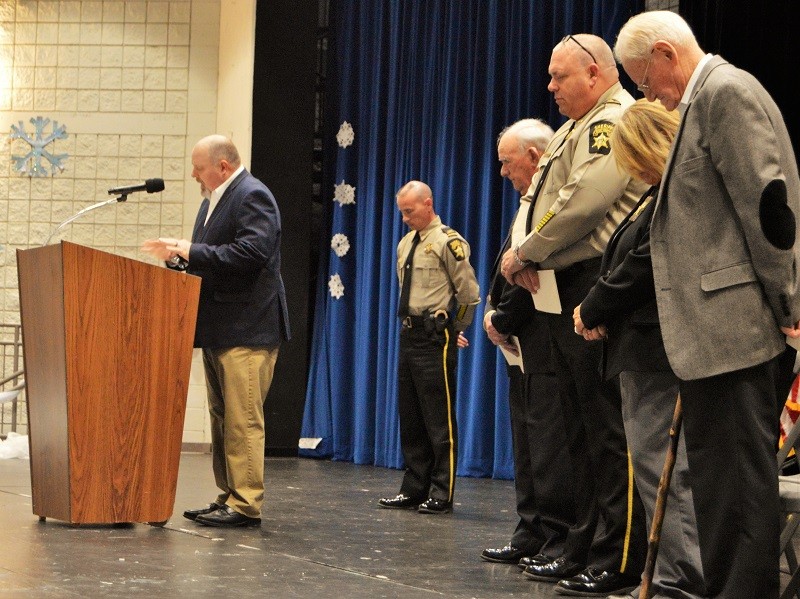 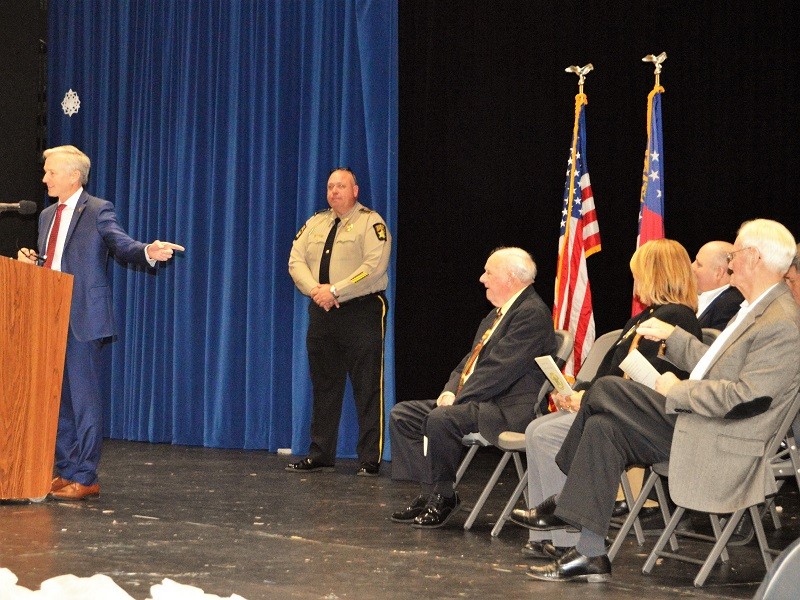 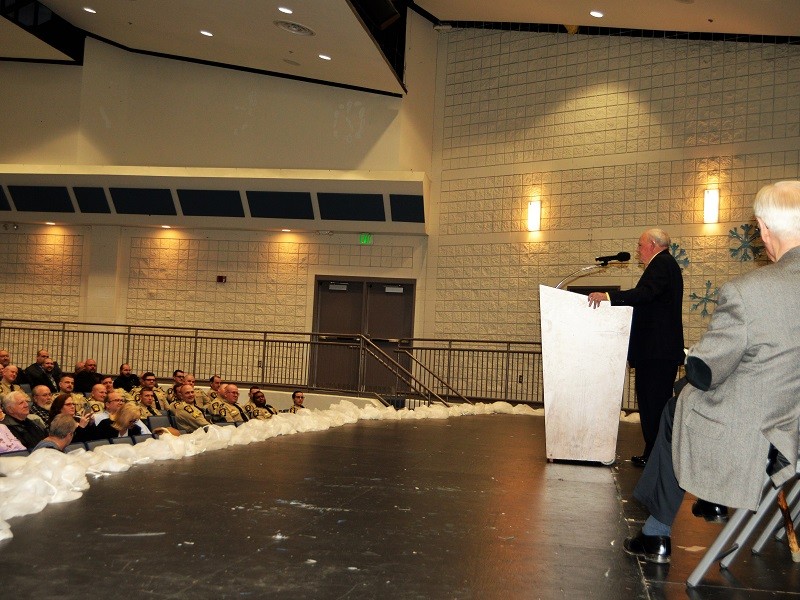 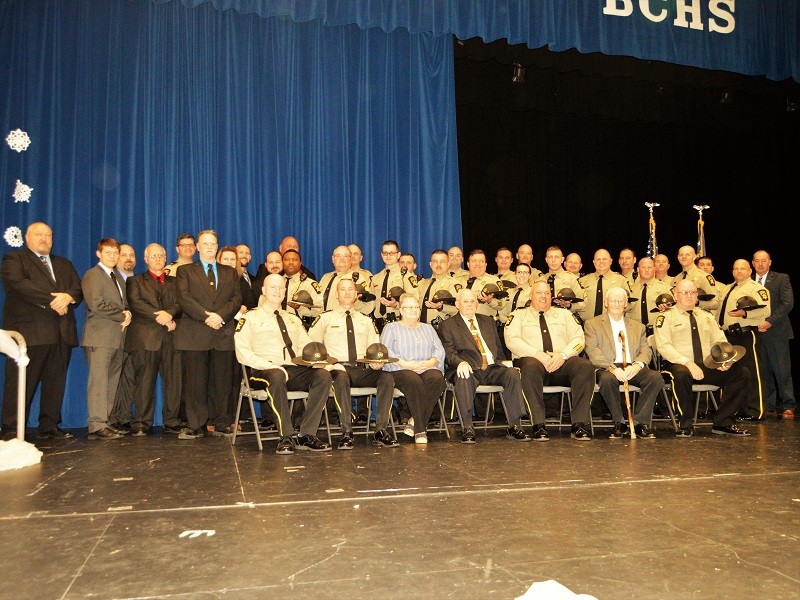 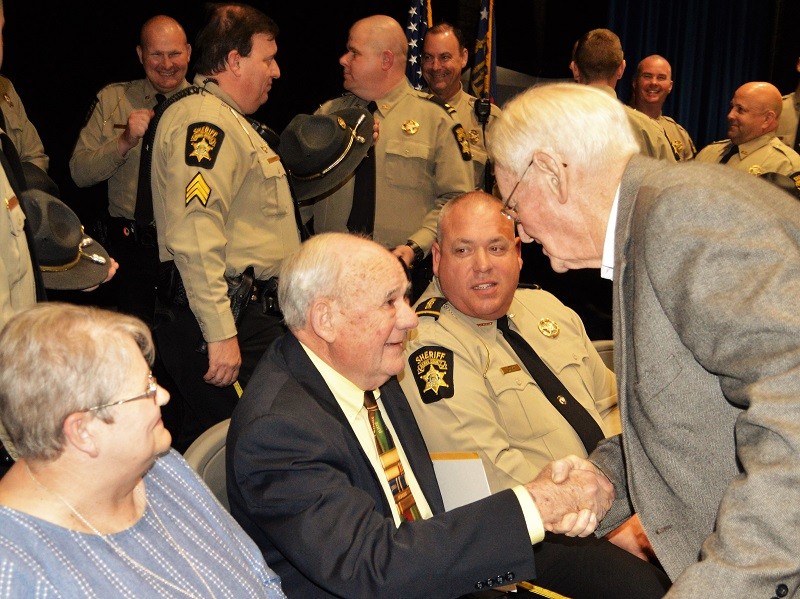 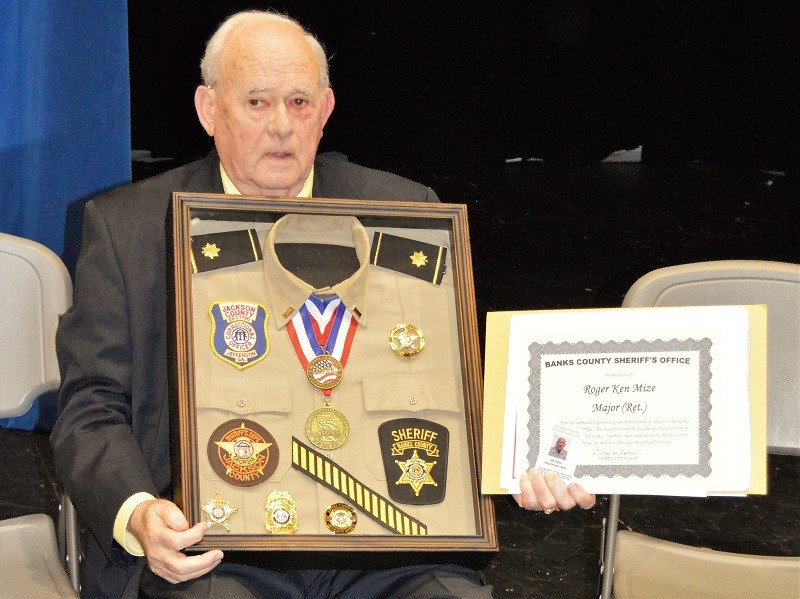 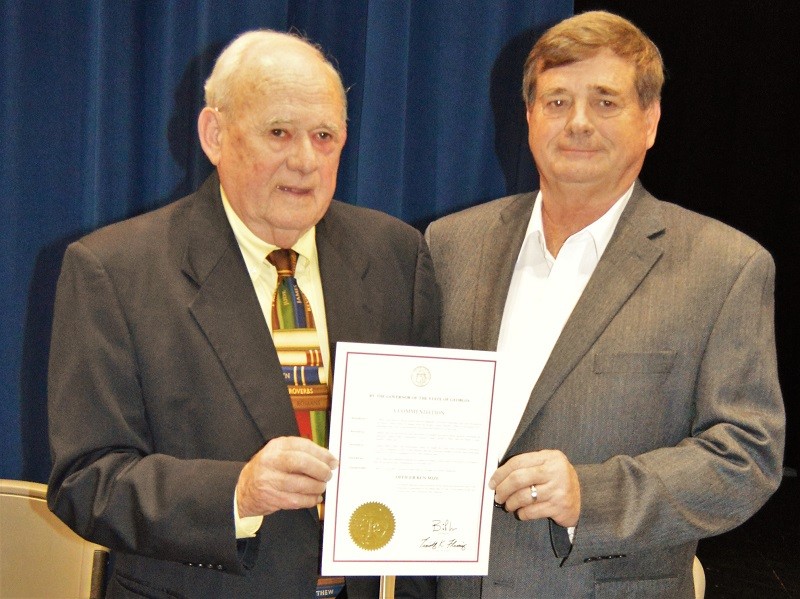 HOMER – A man who has taught more than 33,000 fifth-grade students in Banks and Jackson counties to make good decisions was honored last week for a more than 50-year career in law enforcement.

“Ken Mize is a man that had a heart for the community he served,” said Banks County Sheriff Carlton Speed, master of ceremonies for the event. “When you talk about Ken Mize, you talk about integrity. You talk about a man when he came in every day, he had a smile on his face. He walked around with a skip in his step, and he never met a stranger. Every child at Banks County School System knew Mr. Mize.”

Speed said parents tell him frequently how their children wanted to give Mize a fist bump or high five while he was directing traffic in the area of Banks County Primary School and Banks County Elementary School on Ga. 51.

Similarly, Jackson County Sheriff Janis Mangum praised Mize for his impact on others.

“There’s nobody that I know of in law enforcement has a bigger servant heart than Deputy Ken Mize – always has, always will,” Mangum said.

Mangum, who started working with Mize and his wife Kathy in 1985, said Mize stayed with the Jackson County Sheriff’s Office for 20-plus years.

As a surprise during the retirement program, Speed promoted Mize to the rank of major (retired) for Banks County Sheriff’s Office.

Mize began working with children through the D.A.R.E. program and concluded with the C.H.A.M.P.S. program in Banks County.

Rep. Chris Erwin, who formerly served in Banks County School System, praised Mize for his work with children over 26 years.

“I got blessed for 11 years here in Banks County as school superintendent to work with this gentleman and to see every day what he did in the lives of the children that he touched and the passion that he had for teaching young people the difference in right and wrong, and then how to be safe, in the programs that he worked with,” Erwin said.

Erwin called Mize a role model in the community who had a calming effect, whether as they walked the halls, at a board of education meeting or at a ballgame or other school function.

Erwin read House Resolution 998, registered at the Capitol Jan. 30, a portion of which reads, “Whereas, his inspiring commitment to the welfare of others is an outstanding example of the positive effect law enforcement professionals have on the lives and wellbeing of others.”

“The difference that Ken Mize made in these kids’ lives is like none other,” Mangum said. “God bless you, Ken, for that because that’s what we need to do is make a difference in the lives of our children. They face many challenges in this world and we’ve got to be there to guide them and support them and love them.”

“I believe he came to work just shortly after I began my second term in office,” Chapman said. “To have somebody in the school system like Ken was a great relief off my mind. It made my day easier just to know that he was in the schools.”

But Mize wasn’t simply at work for a paycheck, Chapman said.

“If I’ve ever seen a man whose heart was really in what he was doing, Ken exhibited that,” Chapman said. “You couldn’t hear anything but good things from all the teachers … and the students, they loved him to death. They thought the world of him. He was a father figure to them in some ways, but he was teaching them things every day that no doubt will go with them, and hopefully will go with all of them all their lives. I enjoyed the time that I spent with him.”

“He taught Drug Abuse Resistance Education, DARE program, to over 32,000 students, and Choosing Healthy Activities and Promoting Safety program to over 1,400 students,” the commendation reads.

Speed and Mangum agreed that a person working in law enforcement for a half-century is not common.

“Fifty years in law enforcement, that’s rare,” Mangum said. “I’ve got 31 and I may not make much more, but I’m going to try. We love Ken, we love Cathy, we wish you the very best on retirement.”

“It has been a joy, privilege and honor to have worked with the different agencies that I have while here in Georgia, one of those being the Jefferson Police Department where Albert Westmoreland was chief – a great man,” Mize said. “I then went to the Jackson County Sheriff’s Department, where Stan Evans had just become sheriff – a great man. I came to Banks County, and another great man, Sheriff Charles Chapman. Then after he retired from being sheriff, Carlton Speed became the sheriff of Banks County – another good man.”

He also served as warden of Jackson County Correctional Institute for one year.

Mize said he was blessed in his career.

“I cannot complain one minute about the people that I worked for as far as the leadership that was in the departments that I was in,” Mize said.

Mize credited his faith in God for the success he has had working with students.

“I just can’t say enough about how I have come through all of this, and it’s been by the grace of God and doing what He wanted me to do,” Mize said. “I honestly believe that He wanted me in the classroom because I’ve loved it so much.”

Mize again praised the children, saying they blessed him and made him a better person.

“I’m truthful, they were wonderful, wonderful kids,” Mize said. “And it made me a wonderful person, because I listened to them, I cried with them, I talked to them. Everything was so wonderful. I am so thankful today that I can say it has been good – it’s been a long journey, but it’s been good.”

Mize thanked parents, as well as county officials and co-workers.

Picking up his portable radio, Mize signed off the radio for the last time.

“I give you my last out of service and God bless all of you,” Mize said.

“Major Mize, on behalf of Banks County Public Safety, we thank you for your years of service,” she said. “You are a true man of God and you have been an asset to the Banks and Jackson County citizens. On behalf of 9-1-1 and as your granddaughter, it was a true honor working alongside you and having your six. Thank you and we love you, Papa. Dispatch is clear 873 is out of service on Jan. 30, 2020, at 7:33 p.m.”