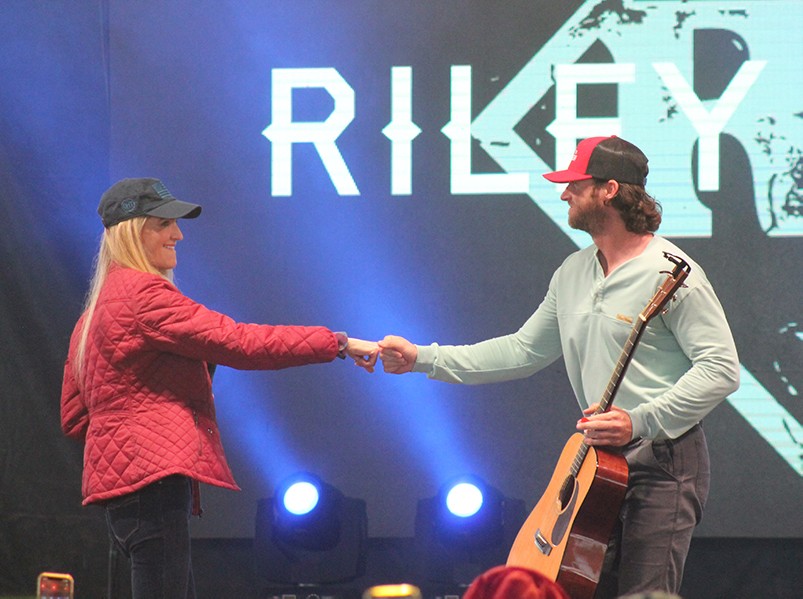 The campaigns of Senators Kelly Loeffler and David Perdue hosted an early vote concert featuring country music star Riley Green this afternoon at the Chicopee Agricultural Center in Gainesville, only days before the January 5 runoff election.

A press release sent out by the Perdue campaign shortly before the concert stated that Perdue and his wife had been exposed to COVID-19, therefore were in quarantine and did not attend today’s event.

Loeffler was able to attend the event and was joined by South Carolina Senator Lindsey Graham and Georgia Senator Butch Miller.

In his speech to introduce Loeffler, Graham asked a cheering crowd of several hundred, “People ask me why I came to Georgia today…you’re going to determine the future of America, are you ready for it?..The reason I am here is because my state, my family, my nation, our way of life depends on you.”

Graham told event attendees that the vote in North Georgia is especially important in the  upcoming election.

“This is the part of the state that runs up the score, that neutralizes Atlanta,” said Graham. “All these young people came here to hear the guy sing…let me tell you if we don’t get Georgia right I worry about your future.”

Graham added that the runoff election is voters’ last chance to defeat the “radical socialist agenda”.

Similar to Graham, Loeffler stated that Georgia is the “firewall” to protecting the rest of the nation from socialist policies. She also compared the remaining days until the runoff election to overtime in a football game.

“Overtime’s happening here in Georgia for the entire country, we have to hold the line here against socialism,” said Loeffler, as several supporters waved Loeffler and Perdue signs. “We need y’all to get out and vote on January 5!”

Following Loeffler’s speech, country music singer Riley Green performed several of his hit songs, including “There Was This Girl” and “Bury Me In Dixie”. Green did not make any comments offering his official support of Loeffler or Perdue or about the upcoming election. His opening act for the evening was Thomaston, Georgia native Tyler Hammond, who also did not offer any political remarks.

Loeffler and Perdue face Democratic opponents Raphael Warnock and Jon Ossoff, respectively, in the runoff election on January 5. Early voting closed at most local locations at 6 p.m. this evening and will remain closed tomorrow in observance of New Year’s Day.