Game of the Week: Two historic programs battle for trip to Class 6A title game 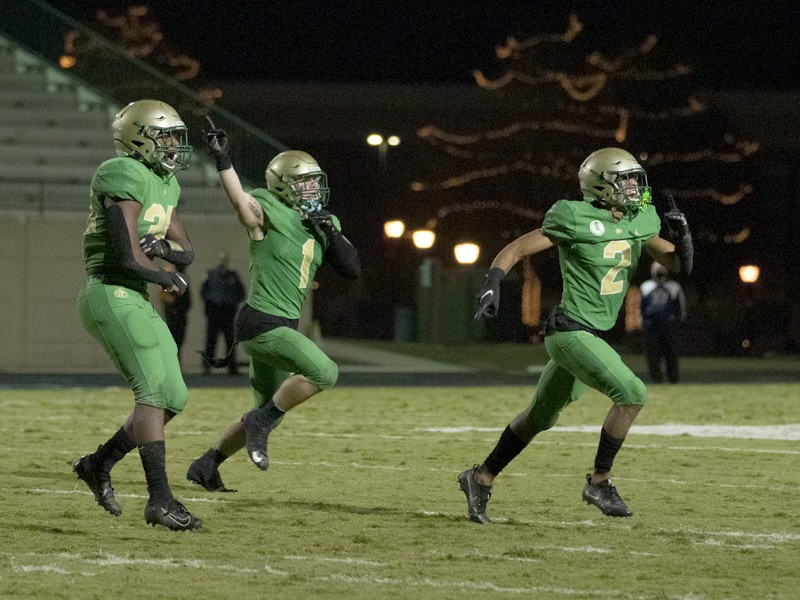 Buford plays host to Valdosta in the Class 6A semifinals at Tom Riden Stadium on Friday.
Photo/Seth Chapman
Contact Editor

BUFORD — Buford’s success is cultivated way before the Friday night lights are flipped on at Tom Riden Stadium.

It’s ingrained in the minds and bodies of future and current Buford Wolves from the time they hit the Gwinnett Football Youth League to the trophy lined hallways of Buford High School. It’s the Buford Way.

And when you actually dig around the Buford Athletic Complex just off Buford Drive, you’ll find it’s actually a way of life.

“What really sets us apart from everyone else is the relationships that are built,” he said. “The desire for one player to want to go play for another. Every team you look at this late in the playoffs, they’ve all talent, hard work and physicality to them, but there’s just that element of Buford – the best way I can put it -- that just separates us from the rest ... that you just can’t prepare for because it doesn’t matter who we are playing against, it doesn’t matter what we do, it’s who we’re doing it together with every year. It’s those relationships that the guys have on the field together to want to fight even harder than someone normally could and probably would.”

The Wolves have executed the Buford Way to almost perfection in writing their first chapter in the Class 6A playoffs. After losing their first regular-season game against North Cobb, the Wolves found the way, finishing with eight straight wins and tops in offensive and defensive production. Now, they’ve cruised through the first three rounds of the playoffs averaging 44 points per game while allowing just 12 ppg.

But they’ll face the state’s winningest program, Valdosta, on Friday at Tom Riden Stadium for a trip to the state championship game after Christmas. Kickoff is set for 7:30 p.m. and can be heard live on AM 550 WDUN.

“We just take it as another time to get better, to go 1-0,” Senior defensive end Caden Williams said. “We’re going to come in fight, claw, and do whatever we need to come out with a win this time. We’re going to be ready for them.”

As players prepped for indoor practice earlier this week, the hype on the outside hadn’t made its way inside. It was all business as usual.

Buford coach Bryant Appling, checking off his pre-practice to-do list along with his everyday duties before practice, said they are preparing for this game just as any other semifinal matchup.

“It’s going to be big. A lot of people on the outside looking in are making it bigger than it probably should be,” Appling said. “It’s a semifinal game – it’s as big as our one last year or any other year. It’s the first time we played Valdosta and all the history they have and all the history that we have [goes along with it.] I’m pretty sure our players are practicing and coaches are coaching just like it's any other semifinal game. We’re not doing anything extraordinarily different than any other year in this situation.”

But the hype can’t be turned down. It’s there. It’s a huge game between two of the state’s most prolific and historic programs. Valdosta (22) and Buford (12) have a combined 34 state championships and 66 region titles.

Since 2000, however, the Wolves have rolled into the semifinals for the 12th time in 14 seasons and 18th time in 21 seasons, including 11 state championships across five different classifications. It is just the 4th semifinals for the Wildcats since 2000 and one state title in 2016.

While it's true every player on the Buford roster is hyped for this matchup, it's just another day at the office with the same goal: win and move on to the next one.

“Everyone is hyped to play this game, but we’re treating it as a regular normal game,” Senior defensive back Amari Wansley said. “It’s going to be cold Friday night, so we’ve got to be able to stay warm, be able to focus and lock in when we’re on the field and come out with a victory.”

VALDOSTA at BUFORD
-- WHEN: 7:30 p.m.
-- WHERE: Tom Riden Stadium, Buford
-- RADIO: WDUN AM 550
-- VALDOSTA (7-4): Ranked No. 6 in Class 6A; No. 2 seed from Region 1; defeated Region 5 champion Carrollton 36-15 on the road in the quarterfinals
-- BUFORD (11-1): Ranked No. 2 in Class 6A; No. 1 seed from Region 8; defeated Hughes 44-15 in the quarterfinals
-- NOTABLE: First-ever meeting between the two programs. ... Valdosta is the state’s all-time winningest program (939 wins) but Buford is the state’s winningest program since 2000 (281-23) with 11 state titles in that span. The Wildcats also are now coached by one of the nation’s most successful coaches over the past 25 years in Rush Propst. ... Valdosta, despite being the state’s winningest program, is into the semifinals for the first time since 2016, the last time the Wildcats won a state title. The 7 wins are the fewest they have ever had in getting to the semifinals. ... The Wolves also are working on another streak. They are 9-0 in their 9 games vs. ranked teams regardless of classification. Their last loss to a ranked team came in 2018 in a 48-24 loss to Archer. ... Buford rolled into the semifinals for the 12th time in 14 seasons and 18th time in 21 seasons. It is just the 4th semifinals for the Wildcats since 2000. ... However, Valdosta is 24-2 in semifinal games all-time. Their last semifinal loss came in 2001 (Parkview, 3014). Buford is 20-4 all-time in the semifinals. ... The two teams won in much different ways last week. After falling behind 15-14 in the 3rd quarter, Valdosta scored the final 22 points of the game. Kaleb Robinson had 136 yards rushing last week for the Wildcats. Buford jumped out to a fast start leading 23-0 at halftime and then cruised in the second half. ... The Valdosta offense has come on of late. After averaging just 24.6 ppg during the regular season, the Wildcats are averaging 44.0 ppg in the playoffs. They have allowed just 36 points (12.0 ppg) in the playoffs ... Buford comes in tops in 6A in both offense (491, 40.8 ppg) and defense (80, 6.7 ppg). ... Buford comes in as the No. 3 team in 6A in rushing (242 yards/game) but Valdosta held the state’s No. 2 rushing attack (Evans) to just 7 points in the second round. ... The Wildcats are the 9th team during the 2020 season the Wolves have faced for the first time ever.