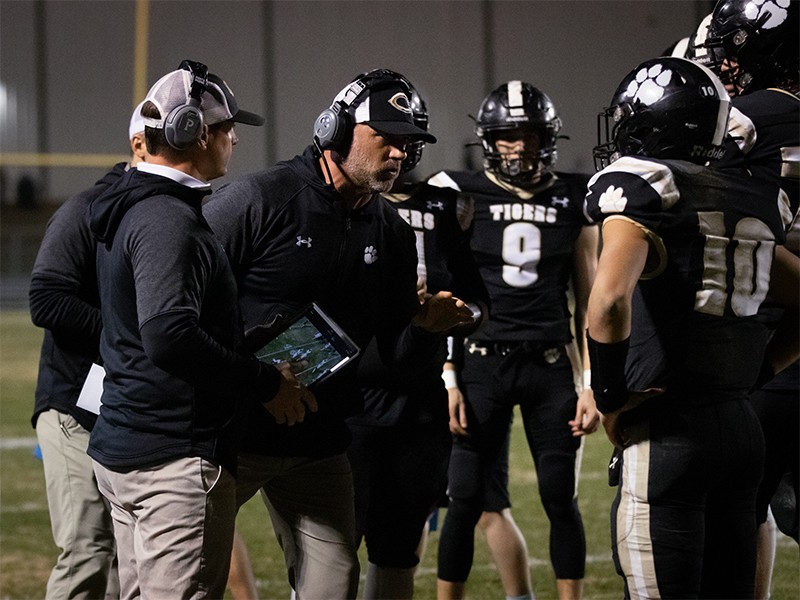 Commerce coach Michael Brown (middle) talks to his group during a timeout during Friday night's gut-wrenching 25-21 loss in the Class A Public quarterfinal round.
Photo/Seth Chapman 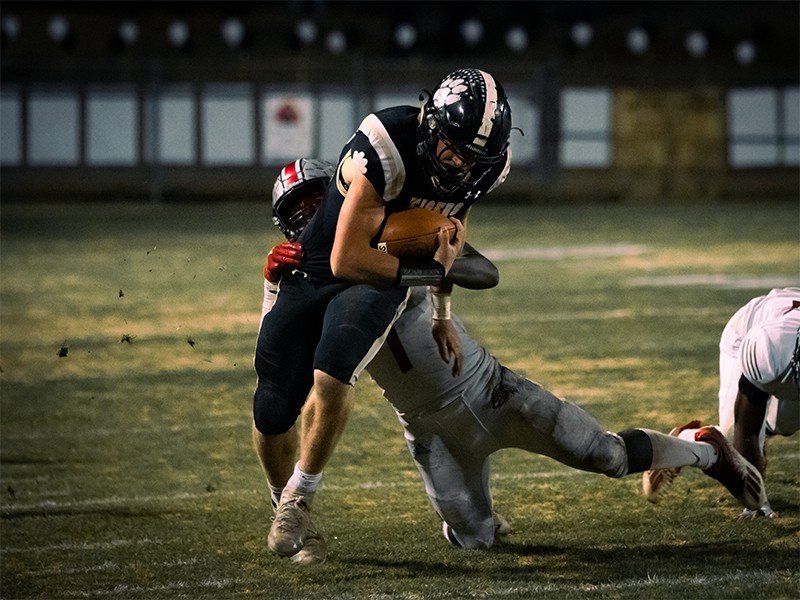 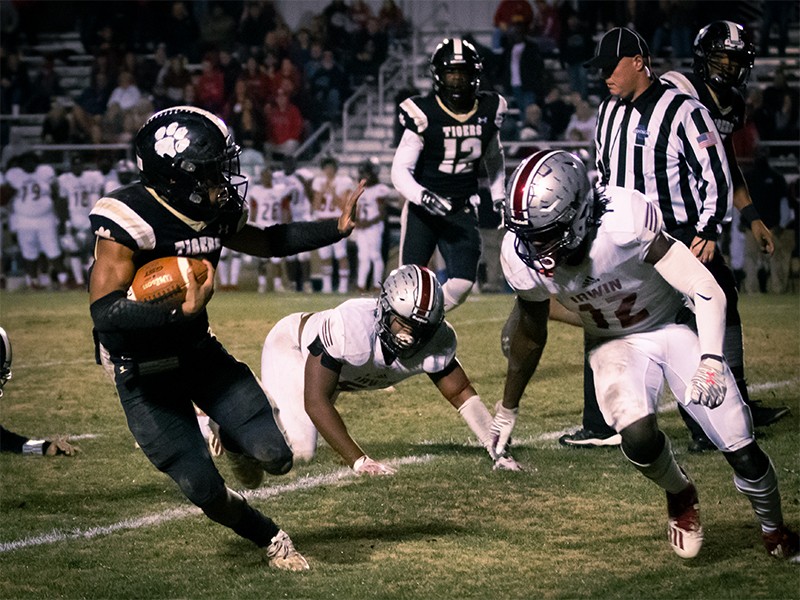 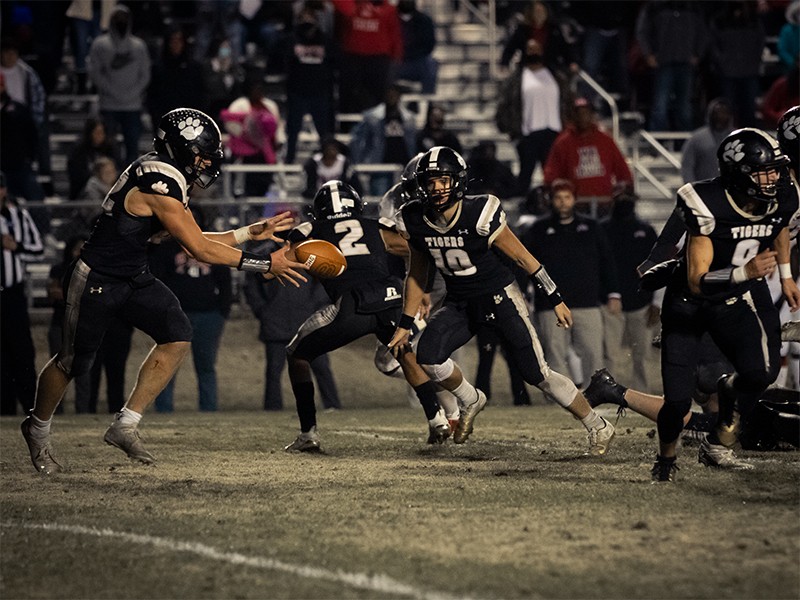 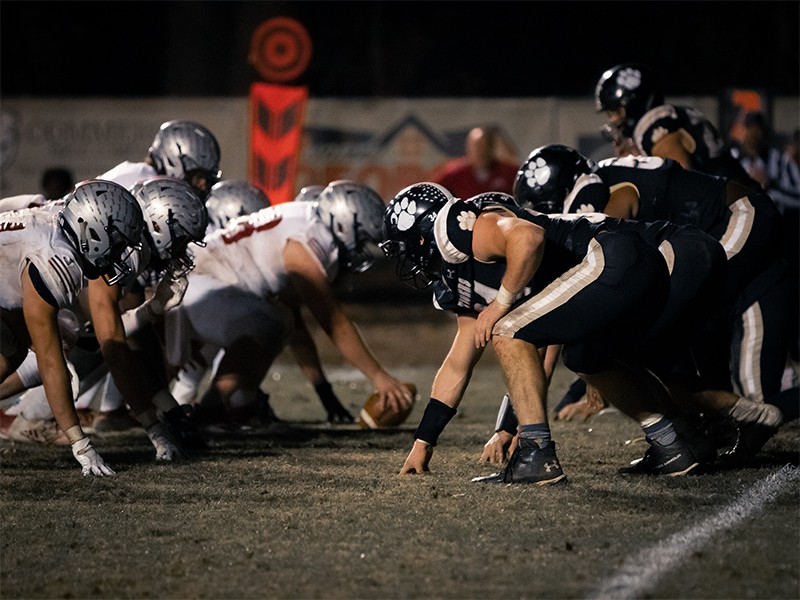 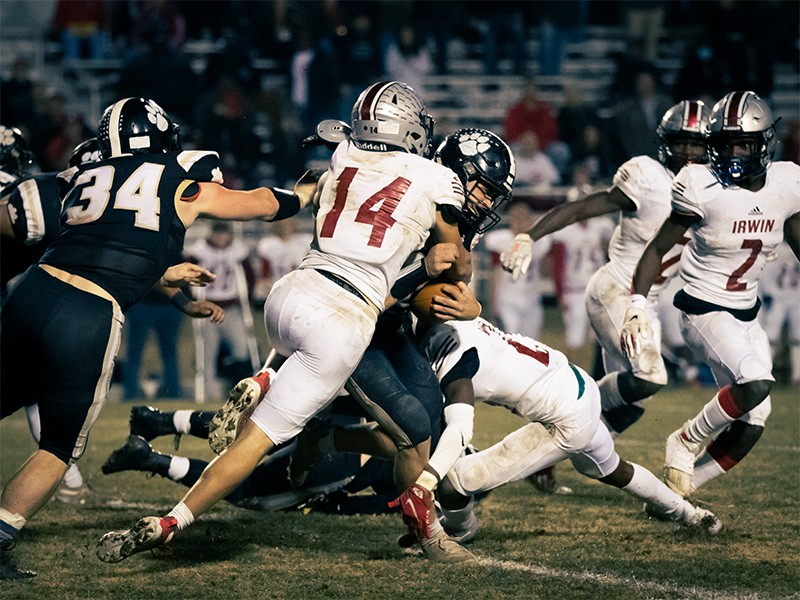 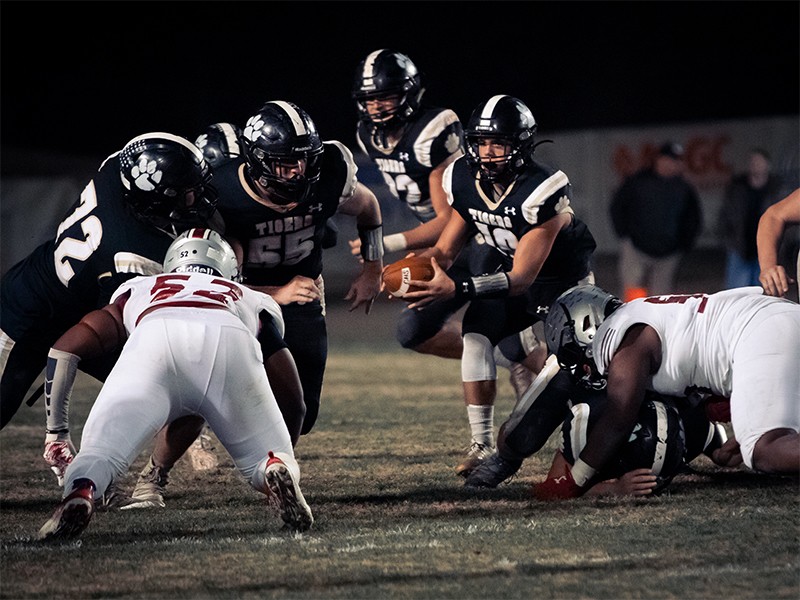 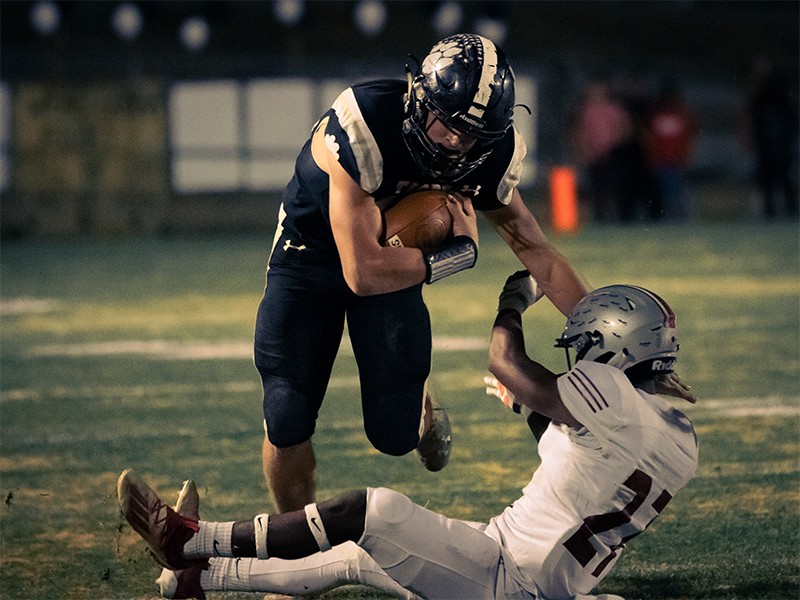 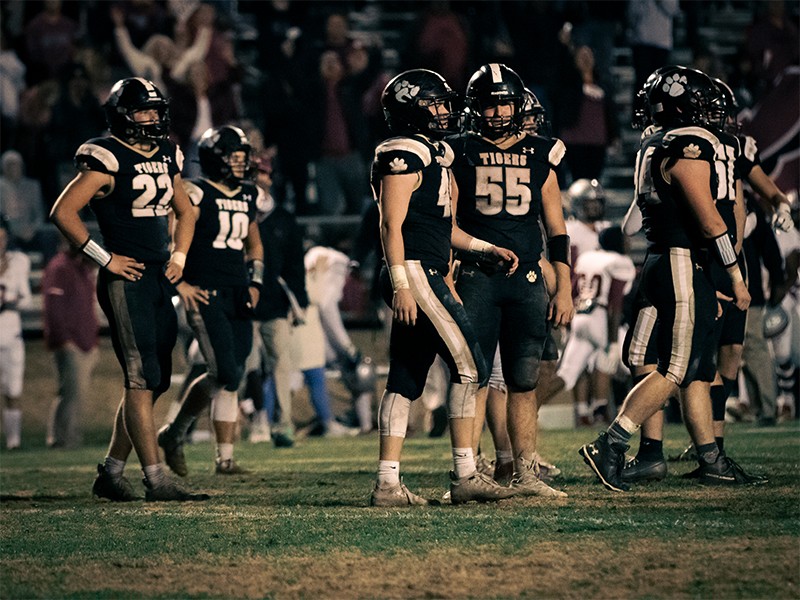 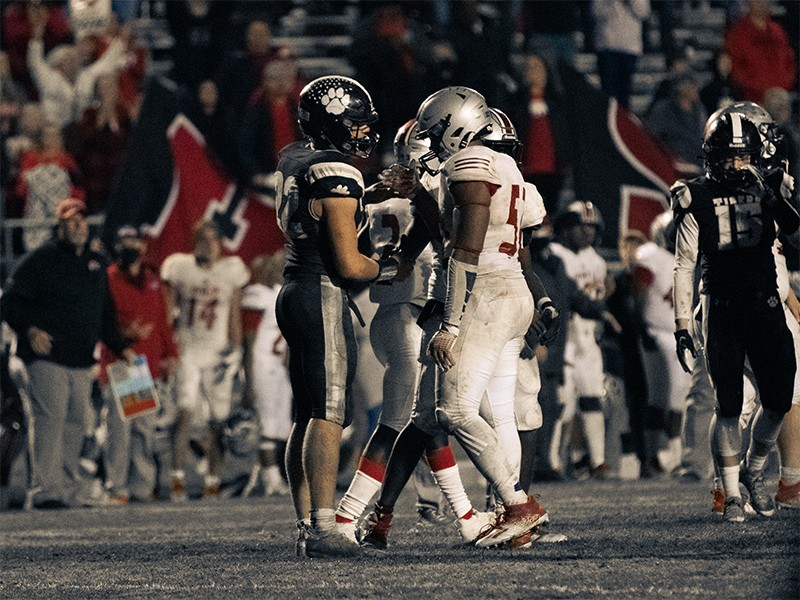 Friday night at Tiger Stadium, it looked like fate would return the favor to the Tigers against the defending champion Indians.

And after converting twice on fourth down on its final drive in the final minutes and moving to the Irwin County 19, Commerce was one more 3-yard fourth-down attempt from pulling the upset. But the Indians defense stopped the Tigers’ Sammy Brown for one of the rare times all night a yard short to preserve a 25-21 win in the Class A Public quarterfinals.

And has been the case in the playoffs, Commerce dominated the second half. They held the Indians, who led 25-14 at the break, scoreless over the final 24 minutes, including getting a crucial stop when Irwin County missed a short field goal with 6:28 left in the game.

But a rough start for Commerce was the eventual difference. Irwin County struck quickly when quarterback Cody Soliday connected on an 80-yard bomb to Gabe Benyard on the first play of the game for a 7-0 lead.

Commerce was poised to answer right back driving to the Indians 5, but the Tigers were stopped on another fourth down play. The Indians capitalized when Kam Ward capped the long drive with a short touchdown run early in the second quarter.

The Tigers finally got going when Brown rambled 26 yards for a score less than two minutes later to cut the lead to 13-7. That came after Brown had put them in scoring position with a 31-yard run.

Irwin answered that with Soliday’s second TD pass to Benyard, this time from 23-yards to push the lead back to 19-7. Brown then converted on a third down with an electrifying 77-yard sprint to the end zone to trim the lead to 19-14. But the Indians were not done as Soliday found Bryce Clements wide open near the goal line for a 26-yard TD pass and a 25-14 halftime lead.

Commerce stormed out of the break driving 65 yards, capped by a 5-yard touchdown run from Dreylan Martin, to make it 25-21 with 8:38 left in the third quarter. Fate again looked to favor the Tigers when Benyard's 99-yard kickoff return for a touchdown moments later was called back for holding.

But both defenses would come up with big stops on third and fourth downs over the final 20-plus minutes to keep both offenses at bay.

Martin finished with 58 yards rushing and quarterback Trey Huff had 45 yards on the ground for the Tigers.

Irwin County (10-3) moves on to play Metter in the Class A Public semifinals next week.

Tigers find heartbreak again in loss to Irwin County
Two years ago, Commerce outplayed Irwin County for 47 minutes before a wild finish dealt the Tigers heartbreak in south Georgia. Friday night at Tiger Stadium, it looked like fate would return the favor to the Tigers against the defending champion Indians...

Buford routs Hughes 44-15; semifinals up next
Buford’s (11-1) relentless defensive attack and grinding rushing game was too much for the Panthers (11-2) to overcome in a 44-15 win in the quarterfinals of the Class 6A playoffs at Tom Riden Stadium on Friday.
Sports

Q&A: Appling says Wolves taking Hughes 'very seriously'
No matter which classification Buford is playing in, the Wolves are always considered a powerhouse program. The current installment of the Wolves are certainly holding true to form advancing to their 21st consecutive Elite 8 round, which now spans six classifications...
High School Sports

Q&A: Wildcats' Shaw not looking past quarterfinals
For Rabun County, the 2020 season is the sixth straight season it has been to the quarterfinals of the Georgia High School Association Class 2A playoffs. Only once in the previous five (2017), however, have the Wildcats been able to move on...
By Jeff Hart

3rd round previews: Powerhouse group of four look to continue playoff push
And then there were four. There are four teams left in the Georgia High School Association playoffs from the AccessWDUN coverage area. But what a powerhouse group it is...
By Jeff Hart