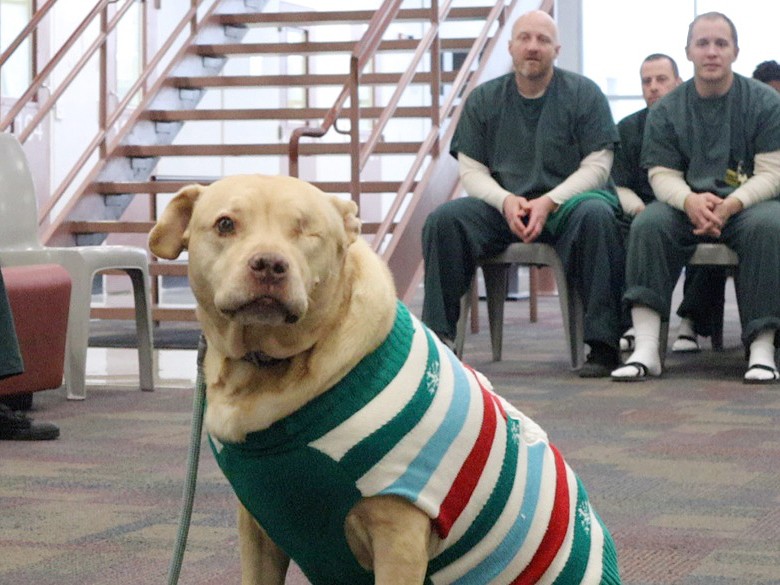 Jail Dog Roxy dons a Christmas sweater during her weekly training as a part of Operation Second Chance, or the Jail Dogs program.
Contact Editor

A group of dogs of various breeds and sizes are participating in a weekly training exercise at the Gwinnett County Detention Center. They follow basic commands like “sit” and “speak” and occasionally pull on the leash held by their handler, who is also an inmate at the jail.

Based on the happy tail-wagging and eagerness to train, it is hard to believe that the same group of dogs were each abandoned or neglected at some point, and narrowly escaped euthanasia.

The dogs are a part of the Gwinnett County Sheriff’s Office Operation Second Chance, also known as the Jail Dogs program, which rescues dogs from local animal shelters and pairs them with jail inmates. The dogs live with their inmate handlers inside of their jail cells and participate in weekly training exercises with them.

Deputy Shannon Volkodav, spokeswoman for the Sheriff’s Office, explained that the ultimate goal of the program is to rescue and find permanent homes for the dogs while also providing some companionship for the inmates.

“When the dogs are in the program they’re considered rescued because we don’t return them to the animal shelter,” said Volkodav. “We just keep them here with us and love on them and train them until we find suitable homes for them with the general public.”

Operation Second Chance began in 2010 when Sheriff Butch Conway learned of the staggering amount of animals being euthanized in Gwinnett County. His concern prompted him to contact the Society of Humane Friends of Georgia and its founder Dennis Kronenfeld, which led to a partnership and the creation of the Jail Dogs program. Volkodav said that Conway chose to work with the Society of Humane Friends of Georgia to make the Jail Dogs program more community-oriented.

When the program first started, there was only one Jail Dog unit. But then the Jail Cat unit was added in 2013; this program, also under Operation Second Chance, pairs adoptable cats with female inmates. The Sheriff’s Office added an additional Jail Dog unit in 2016.

Dogs are immediately available for adoption when they join the program, although most dogs go through some of the training portion of the program before they are adopted.

Volkodav explained that the volunteers who help the inmates train their dogs use positive reinforcement techniques. This training method is often a stark contrast to some of the hard pasts of the animals.

“Some of them have been abused, others neglected or abandoned…And these inmates nurse them back to health,” said Volkodav.

The inmates themselves volunteer to participate in the program, but have to undergo a screening process because some charges can prevent them from joining the unit. Volkodav said that the inmates in the program are usually non-violent offenders and none of them face animal cruelty charges.

Inmates are assigned a dog on a first come, first serve basis. When a dog is adopted, jail staff try to find another dog as soon as possible for that inmate handler.

Volkodav said that the inmate handlers take great pride in their work and often form strong bonds with their dogs.

“Early on in the program it was not unusual to see some of the inmates cry because their dog was leaving,” said Volkodav. “While they were happy that the dog had found a home, because that’s the goal of the program, it’s hard to say goodbye.”

“Many of the inmates who continue in this program want to continue working with animals in some fashion when they’re released from custody, whether it’s working in a pet store or working for a groomer,” said Volkodav.

One inmate was so inspired by his time with the Jail Dog unit that he published a book about his experience- while still in jail. Shane Hawkins told his mother what to write as they would talk on the telephone, then she compiled all of the information together and sent it to the publisher. The book From Trouble to Train is available on Amazon.

But the benefits of Operation Second Chance extend beyond the unit and into the rest of the jail and surrounding community.

She said that dogs are seldom returned to the unit after they are adopted, something she attributes to their training. But if a family can no longer keep a dog they adopted, then they are required to return it to the jail so that the dog never has to go back to a shelter.

The Jail Dogs program benefits the community financially, as well. The unit operates at no cost to the taxpayers because the Society of Humane Friends of Georgia covers all costs associated with care for the animals.

Volkodav ended by stating that the program is a legacy for Sheriff Butch Conway, who will retire at the end of this year.

“Sheriff Butch Conway is known for being an animal advocate and Operation Second Chance, this Jail Dog program, is a wonderful legacy that he leaves behind as he moves into the retirement phase of his life,” said Volkodav. “It’s a great fingerprint that he’s left in our community by providing this program.”

She said that she expects for the program to continue even after Conway leaves his position.

“I would expect it would continue indefinitely, I can’t imagine anyone not wanting to rescue these unwanted dogs and cats,” said Volkodav.