North Carolina State and Georgia Tech are proving it's possible to find positive results in a season made difficult by the coronavirus pandemic.

It has been a rewarding season for eighth-year N.C. State coach Dave Doeren.

Doeren says the Wolfpack learned from last year's overall 4-8 season. The last-place finish in the ACC's Atlantic Division at 1-7 raised questions about the direction of Doeren's program.

“To go from one ACC win to wherever we end up ... that’s pretty damn good,” Doeren said.

An offense installed by new coordinator Tim Beck has provided a jolt even after losing starting quarterback Devin Leary to a leg injury.

“It’s a been a fun year,” Doeren said. “It’s a special group. And obviously if we can get this next one and put us at eight (wins), that would make it even better.

“But going into the year, had you told me we were going to deal with not only the COVID but the number of injuries that we had, and that we would win this many games, I’d probably laugh at you.”

Georgia Tech, in its second season with coach Geoff Collins, has been led by freshman quarterback Jeff Sims, who threw for three touchdowns and ran for 108 yards in the win over Duke.

A win over N.C. State would add more momentum to Collins' plan to build a winner in Atlanta.

The win over Duke followed a four-week layoff that included postponed games against Pittsburgh and Miami.

The Wolfpack has never won more than six ACC games in a regular-season schedule. A win Saturday would mark the first time with seven, though it comes as the league moved to a 10-game schedule due to the coronavirus pandemic instead of its more traditional eight-game set.

“The bottom line is we didn’t choose how they set this thing up this year,” Doeren said. “We didn’t pick who we play. We didn’t get to pick any of it."

Georgia Tech offensive coordinator Dave Patenaude worked on the sideline instead of from a coach's booth against Duke for the first time this season. He said he liked having the more direct communication with Sims and will work on the field again this week.

“It's a different game when you're on the field,” Patenaude said. “For me, I personally like being on the field. I like being in the mix. ... I think it's easier to be impactful, certainly on the quarterback, but able to impact all the groups.”

N.C. State has won five games this year when trailing in the second half, including the win over Liberty and a rally from nine down in the third at Syracuse.

In the team’s seven wins, N.C. State has outscored opponents 114-84 after halftime.

The Yellow Jackets already have topped their ACC win total from 2019, when they were 3-9 overall and 2-6 in conference games to finish last in the Coastal Division.

Georgia Tech's 28-26 home win over the Wolfpack last season ended a streak of six straight wins by visiting teams in the series. Georgia Tech has won in each of its last five visits to Raleigh.

Georgia Tech-Pitt game postponed; rescheduled for Dec. 12
Georgia Tech announced its football game against Pitt on Saturday has been postponed due to COVID-19 related protocols within both teams.
By AccessWDUN Staff 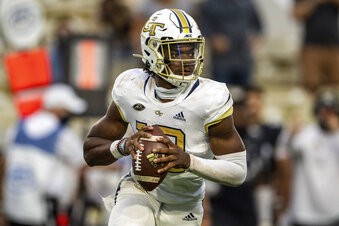 No. 4 Irish holds off Georgia Tech
Kyren Williams ran for two touchdowns, Ian Book passed for another and No. 4 Notre Dame moved on to its biggest game of the season with a dominant defensive performance, stifling Georgia Tech 31-13 on Saturday...
By The Associated Press 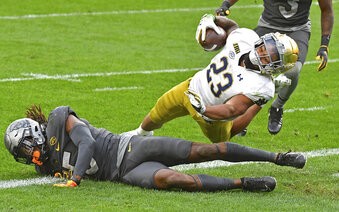 No. 4 Irish heavily favored over struggling Jackets
No. 4 Notre Dame travels to Atlanta on Saturday to take on Georgia Tech in an ACC matchup at Bobby Dodd Stadium...
By The Associated Press

Jackets no match for Lawrence, No. 1 Clemson
Trevor Lawrence brushed off the first interception he has thrown this season and passed for a career-high 404 yards and five touchdowns as No. 1 Clemson overwhelmed Georgia Tech 73-7 on Saturday...
By The Associated Press
Privacy | User Agreement | Contact | Advertise With Us
2021 © Jacobs Media Corporation. All rights reserved. EEO Report. Website by Full Media
Login / My Access
close
Search