Game of the Week: Back to the basics mentality has Trojans in the playoffs 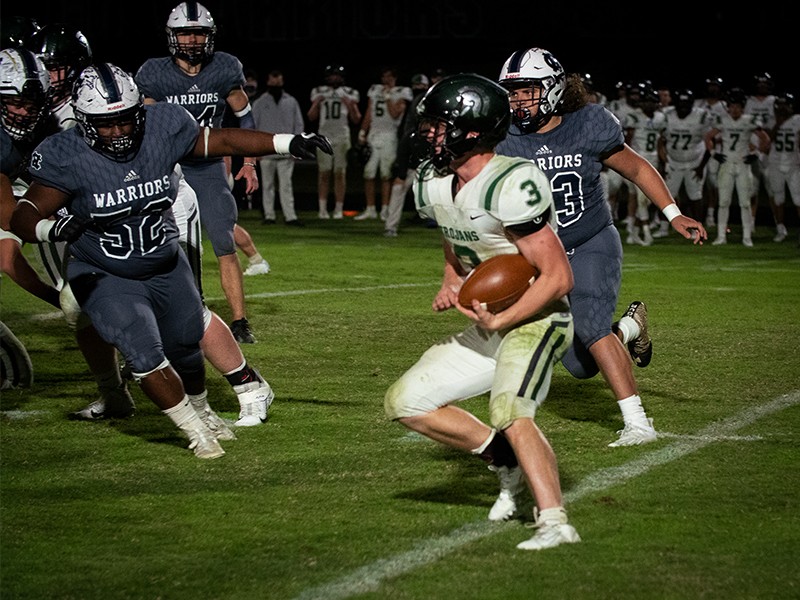 GAINESVILLE — While going back to the basics includes working on fundamentals, to North Hall coach David Bishop, it means more than that.

It’s the main reason a team that lost most of its starting lineup to graduation, battled through 40-plus COVID-19 quarantines this season and has been buried in a thousand different pandemic protocols, finished the season 6-1 and earned a home playoff game – their sixth straight playoff appearance.

“It’s about being true to who you are,” Bishop said. “A lot of people scrap stuff and say ‘we need to try this and try that ... we need to throw more or run more.' For me, it’s getting better at running buck sweep, blocking the edge, running the trap and the blast, and how do we fix things that we see ... that we do year-to-year without throwing everything out and starting over from scratch.”

The biggest battle of the season, or headache, however, has been mitigating through the pandemic. Each week, coaches have faced a laundry list of different protocols. And like Bishop, they’ve racked their minds to find the best ways to keep quarantines down, but still, COVID found its way into the program.

But Bishop remained steadfast in his approach, assigning players to small group sizes, rotating them at different times, constantly reminding the players to move and stand six feet apart.

All of that has forced Bishop, the staff and players, to do things twice. Bishop jokingly said, “the kids are going to be happy to be away from us when the season is over.”

“All day long, it’s six feet apart, get away from each other, stop, move,” he said. “The mitigation processes that we have in place, the multiple changing times, dining times, pregame times, we do two times instead of one every Friday night. We’ve lost kids during the season, so lots and lots of the things we do are trying to preach it over and over again. Obviously, it didn’t stop things because we had 40 something kids quarantined through the season, but we were able to survive because of we have in place, I’ll just call it the North Hall way.”

With all the extra protocols, the Trojans found a way to overshadow the pandemic-filled season, and the results are proof. They began the season 0-3, then reeled off five in a row, including beating rival White County in overtime. They were in the game against Region 7-3A champs, Cherokee Bluff, before falling behind late in the game, and beat Dawson County last week to finish second in the region -- the second straight season.

Bishop gives all the credit to his players and coaching staff.

“Without them, none of this happens,” he said. “It’s just them doing what we believe in and what we do. To be able to achieve what we have done this season is special. To me, it reinforces the things we talk about, and the things we preach every day. There’s a lot of excitement in our community and appreciation for the kids’ efforts and the things my assistants have put together this year.”

Friday is the start of a new season for the Trojans as they begin the Class 3A playoff journey against a high-scoring North Murray team. The Mountaineers, a spread option team, are averaging 39.44 points per game, led by sophomore quarterback Seth Griffin (6-foot-3, 185 pounds), who passed for 327 yards and four touchdowns in the 49-42 win over LaFayette last week. His main target is junior Michael McDade (6-foot-4, 185 pounds), who hauled in 165 yards and three scores against LaFayette. and senior running back D’Ante Tidwell leads the Mountaineers rushing attack. He churned out 131 yards and two touchdowns in Week 12.

“Offensively, they do a lot of stuff,” Bishop said. “They’ve got a few kids that are homerun threats. They’re running back can fly. They’ll find ways to get him the ball whether it be receiver, running back, or quarterback. Their quarterback is very good at running the entire offense, whether it’s the option or throwing the ball, and he’s good at throwing the ball. They are very good at what they do offensively.”

The Trojans are giving up 27 points per game, 22 over the last seven games, and have shown improvement on defense, but Bishop does have some concerns about the Mountaineers' spread option offense, mainly in the North Hall secondary.

“Obviously, the passing part of things, they are very good,” he said. “They do a lot of double moves, and that’s where I have some concerns because we are still young in the secondary. There’s nothing that they do running the ball that’s a lot different from anybody else. Most spread teams are spread option, they run spread option and spread triple. It doesn’t really change up anything that we do. But I don’t think they’ve faced anybody that is as technically as sound as we are.”

Bishop will count on defensive lineman Kevin Rochester, Austin Copper, Jarrett Latty and Grayson Kirby to blow up the middle, while linebackers Clark Howell, Jeremiah Telander, Austin Atha and Bradford Puryear keep the option plays from turning into big plays. And defensive backs Ajay Jones, Parker Caudill and Clay Stover, the last line of defense, will have their hands full with the Mountaineers’ passing game.

As for the Trojans offense, it’s rinse and repeat. Senior Clark Howell (200-1,483 21 TDs), is tops in Class 3A in rushing, leads a very shifty, explosive, triple-headed monster ground attack. Kevin Rochester (120-761, 9 TDs) and Brad Puryear (51-331, 3 TDs) have ripped off some big plays this season. They will face a North Murray defense that's giving up almost 29 points per game and is a 4-3 base defense.

North Hall has been able to control the clock this season with long, grinding drives. They've also controlled the tempo and pace of the game with the explosive and ground happy wing-T offense. Bishop says the keys to the game are no different than they have been all season: clock control and playing fundamentally sound on defense.

“I believe if we just play sound fundamental defense,” he said. "When you are facing an option offense, you have to play assignment football more so than any other offense that you face. Making tackles is huge because in a lot of situations, you are one on one. So, we’ve got to make those tackles in space. Offensively, doing what we do. We have not turned the ball over in the last six games, which is really big when a lot of times you’re in semi-close ball games. Plus, control the pace and be successful in the run game again this week.”