Game of the Week: Buford, Dacula renew rivalry in Region 8-6A title game 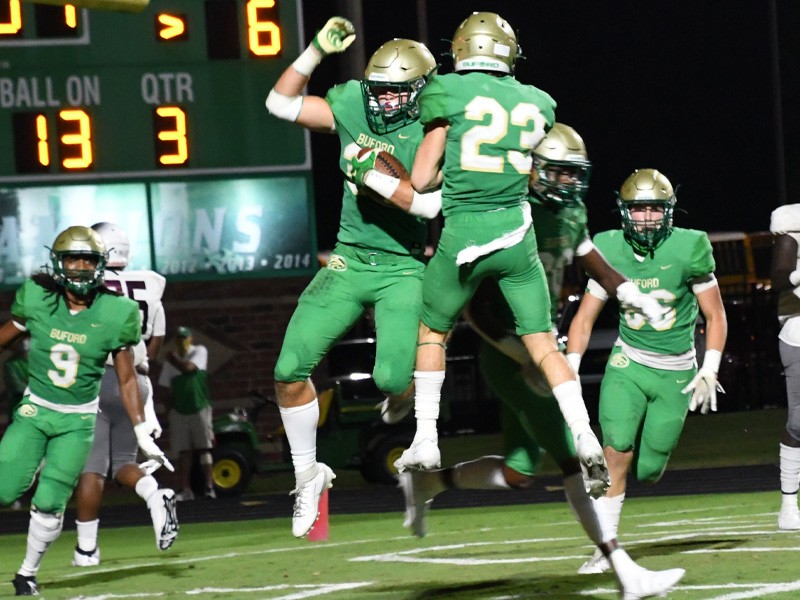 BUFORD — It’s been 25 years since Buford and Dacula have played each other.

The last meeting, a 26-0 Buford win when both were in Class A, halted the series that dated back to 1964.

Tonight, all of that will change as Buford and Dacula tee it up for the Region 8-6A championship at Tom Riden Stadium. Kickoff is set for 7:30 p.m. and can be heard live on AM 550 WDUN.

“It’s crazy, a lot of these kids weren’t even alive the last time we played Dacula,” Buford coach Bryant Appling said. “Our kids know each other and they’ve been waiting on the opportunity to play them."

When the Georgia High School Association reclassified its more than 450 member schools earlier this year, Buford moved up a classification and was placed in Region 8-6A.

It just so happened, several teams from Gwinnett County were already housed in the region, and two of those were just down the road from Buford -- Lanier and Dacula.

Appling said it’s the first time in a long time that Buford has played a neighborhood rivalry-type schedule.

“Lanier is right down the road, and Dacula is not too far away,” he said. “The kids grow up playing against these guys in GFL. It’s going to be a special situation. I wished it was a normal year so we could have the crowd and doing it the way we want to do with pep rallies and stuff like that, but it’s still going to be fun.”

While it’s a game that has been circled in bright red ink since the schedule was released in March, it’s also a culmination of a tiring and trying regular season that has seen both teams have games canceled, or moved, due to the COVID-19 pandemic.

But more so for Buford. The Wolves had an impressive schedule on paper, then COVID quickly scratched several of the out of state games, leaving Appling and his staff to find replacements. Well, that was difficult, too. They reached out to anyone and everyone that had an open date to no avail.

It left the schedule looking like swiss cheese and made it difficult for the Wolves to keep the momentum going.

“It wears on coaches and wears on kids and parents,” Appling said. “A lot of open weeks in the middle. Some times during the year, we felt like we couldn’t get any momentum going because you play two weeks then you're off, play another week or two then off again. We just didn’t know what each week was going to hold. It’s hard not knowing what’s going to happen from week to week. ”

The Buford Way prevailed, however, and the Wolves are at the top of their game going into the massive game against No. 4 Dacula tonight.

They’re the top scoring offense in Class 6A (40.2 points per game) and have the fourth-best defense, giving up 7.2 ppg. And although the Wolves are a run-first team, their passing game has been a welcomed addition this season.

“We started three different guys at the beginning of the year and each kid got a start," he said. "We kept them rolling a series or two at a time. Dylan and Ashton have been encouraging to each other and have been each other’s biggest fans. We’ve had a couple of years where we’ve had two guys that are just as good as each other and they both get equal time. We are lucky and blessed to have two guys that can play the same position, especially this year.”

“We’ve been slow going at times because of new kids in new positions upfront,” Appling said. “They are coming into their own. Victor and Gabe have been bright spots throughout the whole season. And CJ, I can’t say enough about him catching the ball out of the backfield and running the ball downhill. The line of scrimmage has grown immensely and looking forward to what they’ll become in the next couple of weeks.”

Defensively, Tommy Beuglas (34 tkls) and Amari Wansley (28 tkls) lead the team in tackles, and the Wolves have five players with 20 or more tackles and five with more than 15 tackles.

“They are playing fast, physical and hard all the way through the whistle each play,” Appling said about the defense. “We have a smart group that can adjust on the fly and gets things taken care of.”

Likewise, Dacula is an athletic, physical team that is averaging just over 35 points per game (4th in Class 6A) on offense and giving up 18.7 on defense.

“One of the most athletic teams that we’ve seen,” Appling said about Dacula. “They’re kind of built the same way we are. It’s strength versus strength. We need to do everything we need to do for 48 minutes to win this game.”

Junior running back/linebacker Kyle Efford is one of those physical players for the Falcons. He has four Power 5 offers, including Georgia Tech, and rushed for 224 yards last week against Central Gwinnett.

“He has vision, has quicks, power and holds on the ball really well,” Appling said.

Sr. safety Kaleb Edwards is the leader on the Falcons' defense. The Georgia Tech commit has been injured, but Appling expects him to be back this week.

“Our kids are not expecting anything less,” he said about Edwards. “I think he’ll be ready to go and be in this game.”

And their quarterback, Blaine Jenkins, has improved this season, according to Appling.

“He has grown up a bunch this season, so I expect it to be a fun game,” Appling said.

Appling said the biggest key of the game is “just play Buford football.”

“In a championship game like this, you don’t have to play perfect, just play your game and win the battles that you need to win," he said. "We’re going to make a mistake and give up something, and they’ll give up something, but if you battle more than they do, you’ll have a chance to be on top at the end of the night.”