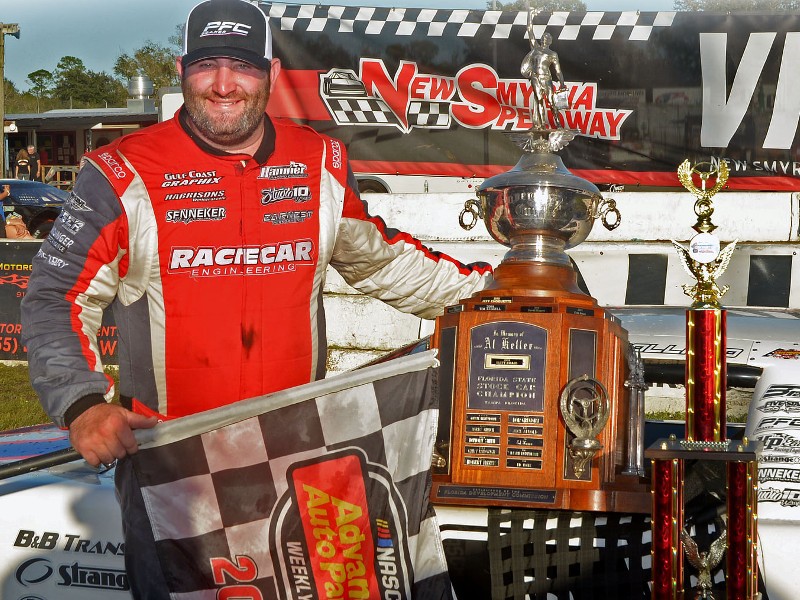 The asphalt Super Late Model “to do” list for Bubba Pollard is not a long one, but he was able to mark an item off that list on Sunday afternoon.

The Senoia, Georgia racer took the lead with about 50 laps left to go in the Governor’s Cup at Florida’s New Smyrna Speedway, and went on to record the victory.

It marked Pollard’s first victory in the storied Sunshine State event, as he joins drivers such as Dick Trickle, Gary Balough, Butch Miller and others with a victory in the race, which dates back to 1965.

Pollard rolled off from the sixth starting spot, while pole sitter Brad May jumped to the early lead. May led the way around the half-mile raceway for most of the first half of the 200 lap race. He finally gave up the position to second place starter Jesse Dutilly around lap 90.

Dutilly held the lead over the next 60 laps. But the race took a turn when a caution came out with about 50 laps to go when Stephen Nasse slowed on the track.

That brought many of the competitors, including Pollard, to pit road while Dutilly decided to stay on track.

Back under green, Pollard stalked Dutilly, looking high and low for an opening. He finally made the pass with about 45 laps to go to take the lead.

From there, Pollard went on to his first Florida Governor’s Cup victory.

Daniel Dye finished in second, with George Gorham in third, Dutilly in fourth and May in fifth.