Chase Elliott to race in Snowball Derby at 5 Flags 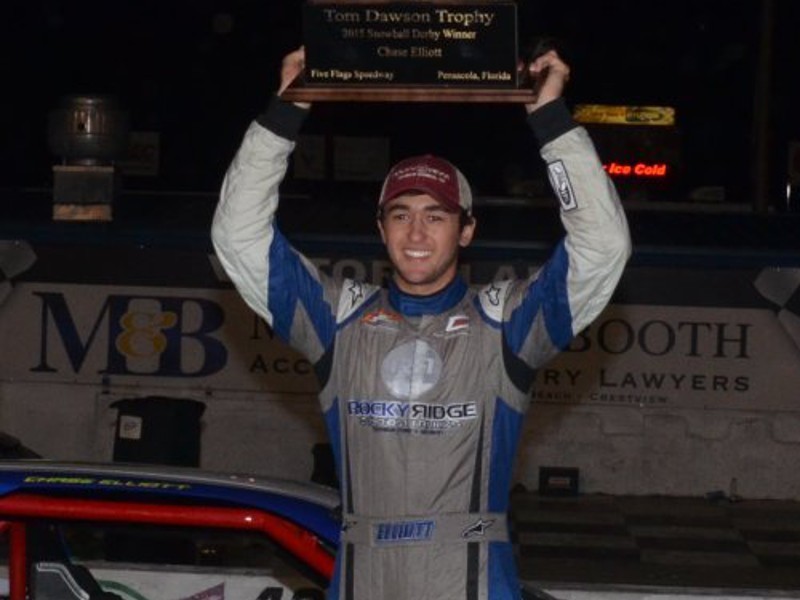 Chase Elliott lifts the Tom Dawson trophy as the winner of the 2015 Snowball Derby at 5 Flags Speedway. Elliott will return to competition in the Super Late Model event in December for the first time since that 2015 victory. Photo: Eddie Richie/Turn One Photos/Loxley, AL
Contact Editor

The Dawsonville, Georgia racer plans to compete in next month’s 53rd annual Snowball Derby at Five Flags Speedway in Pensacola, Florida, according to a story posted on the track’s website.

It will mark the eight career start for Elliott in the asphalt Super Late Model event, a race he was won two times, in 2011 and again in 2015.  It will also be the first start in five years in the Derby for the 24-year-old, who honed his racing skills on the short tracks in asphalt Late Model competition around the country before moving into the NASCAR ranks.

In all, Elliott has led 411 laps in the Snowball Derby.

Along with the two wins, Elliott can boast three top five and four top 10 finishes in seven starts, along with a pole in 2013.

For some, that 2013 race should have also been a win, as Elliott was flagged in first when he crossed the finish line.  But he was disqualified in post-race tech after a tungsten weight, which is against the rules for the Derby though it gives no on-track advantage, was found in his car. The win would be stripped from Elliott and given to Erik Jones, who is now also a competitor on the NASCAR Cup Series.

Elliott has also seen success in the Saturday night preliminary race to the Snowball Derby, the Snowflake 100 for Pro Late Models.  He has won that event three times in six starts, with victories in 2010, 2012 and 2013.

The Snowball Derby is slated for December 2-6.  For more information, visit 5FlagsSpeedway.com.