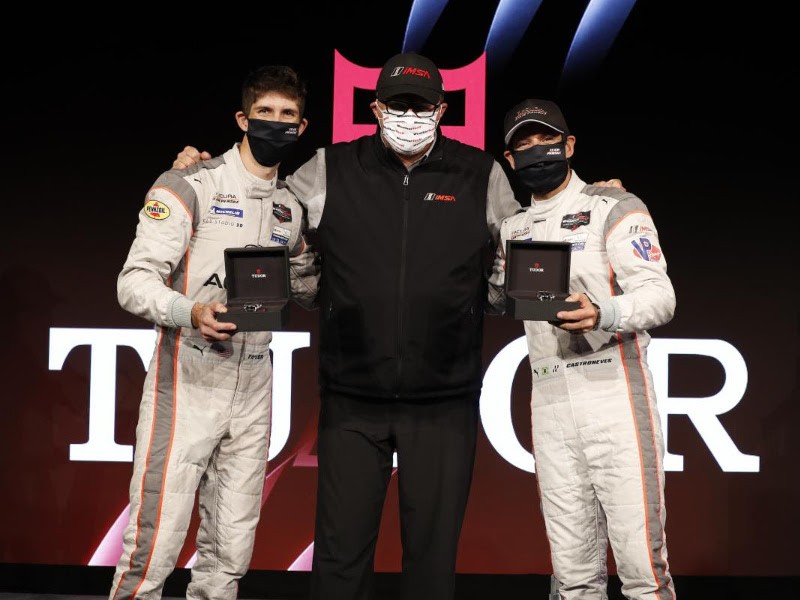 Little more than an hour into the Mobil 1 Twelve Hours of Sebring, Helio Castroneves looked at his wounded race car and tried to remain positive.

“Anything is possible,” he said.

Boy, was he right in the end. A stubborn effort by the No. 7 Acura Team Penske Acura ARX-05 DPi co-driven by Castroneves, Ricky Taylor and Alexander Rossi outlasted mechanical issues to finish eighth in the Daytona Prototype international (DPi) class, seven laps behind the race winner but one point ahead of its closest competitor in the final IMSA WeatherTech SportsCar Championship standings in the driver, team and manufacturer categories.

The runner-up in the championships – the No. 10 Wayne Taylor Racing Cadillac DPi V.R co-driven by Renger van der Zande, Ryan Briscoe and Scott Dixon – also was beset by problems and finished seventh in the race.

The race started with a penalty against van der Zande, who was summoned to serve a drive-through penalty after he was determined to have changed his lane before reaching the flagstand at the start of the race.

Van der Zande moved the No. 10 Cadillac left behind Taylor’s pole winning No. 7 Acura as the field approached the start. Changing lanes before reaching the start-finish line is a violation.

Penske’s No. 7 car then encountered mechanical issues and the championship seemed out of reach. Forty minutes into the race, the left intercooler malfunctioned on the car. A 25-minute repair left the car far behind the field and in desperate need of a miracle.

“We’re going to fight until the end,” Castroneves said while the work was underway. “Anything is possible. We’re going to keep fighting. We’re going to come back and keep going. It wasn’t meant to be, but it ain’t over. I don’t want to lose hope right now. I know it sounds difficult. It is.”

In perhaps the most critical moment in the championship battle, a collision between Oliver Jarvis in the No. 77 Mazda Motorsports Mazda DPi and Dixon in the No. 10 Cadillac, forced Dixon to limp to the pits with a flat right rear and led to an extensive repair.

“I think there was no way he was going to make the corner,” Dixon said. “I kind of saw him coming and tried to give him enough without wrecking myself. I got off track a little bit in the hairpin and got dirty tires.”

As was the case throughout the race, unusual circumstances helped and hurt drivers. With 2 hours, 27 minutes left, Pipo Derani in the No. 31 Action Express Racing Cadillac DPi-V.R and Juan Pablo Montoya in the No. 6 Acura Team Penske Acura ARX-05 DPi collided in Turn 5, taking Montoya out of the lead and moving Olivier Pla and the No. 77 Mazda closer to the front.

Pla quickly caught and passed Derani, who then was penalized for the contact with Montoya. And then, just after serving the penalty, the No. 31 also slowed on course with a problem on the right front.

The damage was extensive for the No. 31, but the No. 6 rallied back to finish second — ahead of the four Cadillacs in the race. That allowed Acura to add the manufacturer title to the team and driver championships.

After claiming a season championship for the first time in his 23-year professional career in the United States, Castroneves reflected, “In racing, anything is possible,” he said. “We started the season with no points on the board and all of a sudden we’re battling for the championship. Unfortunately, in this situation, it was completely outside of our hands. We literally were waiting for things to happen, and they did.”

“It was destiny,” Castroneves continued. “I always say if it’s meant to be it will be, and I’m so glad it was our turn. You never give up. … We never gave up.”

With 27 minutes left, Jarvis’ left rear tire went flat on the No. 77 Mazda and sent him off course, bringing out a full-course caution. That gave the lead to their sister car, the No. 55 Mazda with Harry Tincknell behind the wheel. Tincknell retained the lead and went on to celebrate the win with co-drivers Jonathan Bomarito and Ryan Hunter-Reay.

“I said to myself, ‘This is what you dream of,’” Tincknell said. “Twenty minutes to go, leading one of the biggest races in the world. You just have to go for it, give it everything you have. No regrets. I just pushed like crazy.”

The No. 77 shared by Pla, Jarvis and Tristan Nunez finished third in the race.

While all that was happening during the course of 12 hours and 348 laps around Sebring’s famed 17-turn, 3.74-mile circuit, the No. 52 PR1 Mathiasen Motorsports ORECA LMP2 07 co-driven by Patrick Kelly, Simon Trummer and Scott Huffaker claimed the race win in the Le Mans Prototype 2 (LMP2) class after already claiming the team and driver championships Nov. 1 at WeatherTech Raceway Laguna Seca.

The most important element to the team’s success? Its drivers get along.

What a way to go out!

The No. 911 Porsche 911 RSR-19 driven by Nick Tandy, Fred Makowiecki and Earl Bamber crossed the finish line 9.025 seconds ahead of its No. 912 stablemate piloted by Bamber, Laurens Vanthoor and Neel Jani. It was the first 1-2 finish for the team since the cars finished in the same order last year at VIRginia International Raceway and was the third consecutive Twelve Hours of Sebring triumph for Tandy and Makowiecki.

Tandy, Makowiecki and Matt Campbell kicked off the three-race winning streak to end the season last month in the Motul Petit Le Mans. Bamber and Vanthoor put the No. 912 in victory lane two weeks ago in the Hyundai Monterey Sports Car Championship at WeatherTech Raceway Laguna Seca.

The storybook ending for Porsche’s GTLM program that began in 2014 didn’t look like it had much chance of happening until less than 18 minutes remained in the race. The No. 25 BMW Team RLL BMW M8 GTE appeared in control until an incident on the final race restart collected Connor De Phillippi in the No. 25 and GT Daytona (GTD) class leader Jeff Westphal in the No. 63 Scuderia Corsa Ferrari 488 GT3.

The two Porsches avoided the incident precipitated when Lawson Aschenbach’s No. 74 Riley Motorsport Mercedes-AMG GT3 ran into the back of the No. 25, which was then turned into the No. 63.

“We were trying to chase down the No. 25 and we probably didn’t have the pace on them on a long run,” Tandy admitted, “but we were obviously trying to keep pressure on them. … I watched when he (De Phillippi) went off into the grass, went up the inside and said, ‘Ooh, we’re in the lead!’ It was good for us. We were happy with it.”

Bamber said he couldn’t think of a better way to earn his first Twelve Hours of Sebring win and sent out the Porsche GTLM project on the highest of notes.

“It’s awesome to finally get that first win at Sebring; been trying quite a few times,” he said. “I think it’s a super fitting way to finish the program. The last race is always what you’re remembered by and a 1-2 is the perfect way to go out for this program.”

Corvette Racing had a rare off day, its cars finishing fifth and sixth in class after both dealt with rear suspension issues necessitating lengthy repairs in the paddock. It couldn’t spoil the fact that No. 3 Corvette C8.R drivers Antonio Garcia and Jordan Taylor had already clinched the GTLM driver and team championships. And by starting the race, Chevrolet sewed up the manufacturer crown as well.

It took the entire 2020 season to get a victory, and it may have been a bit of a gift, but the No. 16 Wright Motorsports Porsche 911 GT3R drivers and crew eagerly accepted their GT Daytona (GTD) spoils of victory in the Mobil 1 Twelve Hours of Sebring.

The No. 16 was the beneficiary on the final restart when the cars that were running 1-2 in GTD – the No. 63 Ferrari and No. 74 Riley Mercedes-AMG – were involved in the three-car incident in Turn 3. It opened the path for Patrick Long to zoom into the lead in the No. 16 and drive on to his fourth Twelve Hours of Sebring victory and the first WeatherTech Championship win of any kind for co-drivers Ryan Hardwick and Jan Heylen.

“I never thought my first win would come here,” Hardwick said. “I just feel really fortunate to be in this position and with this team. We knew we had to win this race to have any shot at the championship and that’s all we talked about these last few weeks. This one is special for me.”

The No. 16 drivers battled a malfunctioning left rear shock most of the race that hindered its handling. But when it counted most on the final restart, Long maneuvered past the crash ahead and held off Roman De Angelis in the No. 23 Heart of Racing Team Aston Martin Vantage GT3 by 3.27 seconds.

“It was a spectacle in itself as we came out of Turn 1,” Long said. “It seemed like Lawson and the Merc had a tremendous pace, and it seemed like he was going to go through come hell or high water. Unfortunately, he took a car with him and it opened the door for us.

“It feels like the monkey off the back to finally get a victory at the biggest race of the year, at least in my opinion.”

Despite the win, the No. 16 and Long and Hardwick finished two points shy of catching the No. 86. Needing only a fifth-place finish to clinch the GTD championship repeat, the No. 86 took third with drivers Mario Farnbacher, Matt McMurry and Shinya Michimi.

Farnbacher was also the 2019 GTD driving champion with Trent Hindman in the No. 86, while McMurry took home the 2019 title in Le Mans Prototype 2 (LMP2) competition. In addition to repeating as the team champion, the No. 86 helped Acura secure the manufacturer crown this year as well.

“It means a lot,” Farnbacher said. “This year was just amazing sharing the car with these two amazing gentlemen and also with Jules Gounon at the Rolex 24 (in January). It was a crazy ride this year with COVID and all the compression of the race schedule.

Ultimately, to end the Meyer Shank program with the NSX means a lot to finish it and thank them with the constructor title, the team title and the driver championship as well. I’m really privileged and thankful for that.”

McMurry agreed. “It means a ton,” he said. “It was a really challenging year, a really tough field. A new car to learn how to drive but I had the best team and co-driver to do it with. I’m really proud of the team and the co-drivers and myself to do what we did. I don’t think a lot of people have gone from a prototype to a GTD championship and back-to-back. And it’s been my first two full seasons of IMSA, too. All in all it’s pretty great.”