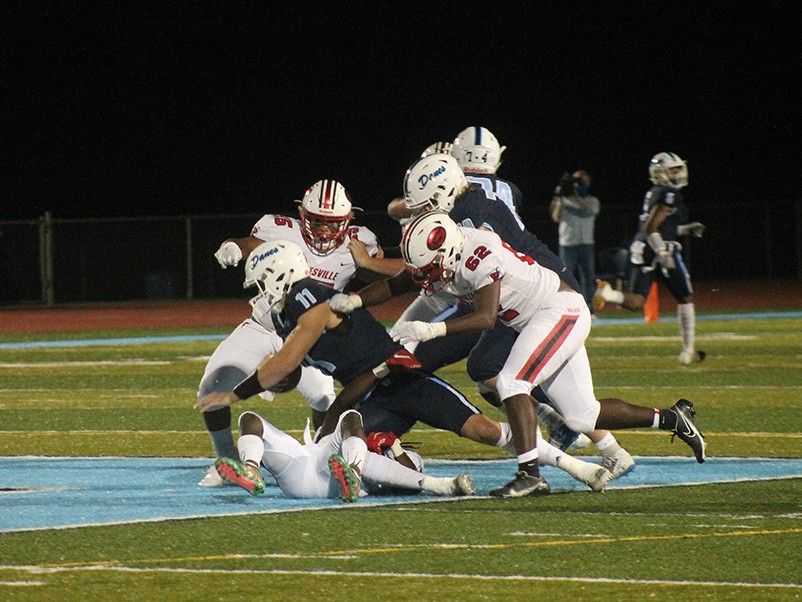 ALPHARETTA — Gainesville’s bid to clinch a playoff spot in its first season in Class 7A will come down to a one-game showdown next week against North Forsyth.

That’s because the Red Elephants’ comeback bid against Denmark fell short Friday night, 24-21, in another gut-wrenching finish in the always-exciting Region 6-7A.

The two teams were battling for sole possession of first place in Region 6-7A with just one week left. Now, the best Gainesville can hope for is a third-place finish.

Gainesville (5-4, 3-2 Region 6-7A) fell behind 21-0 in the second quarter as Denmark exploited the Red Elephants defense through the air behind senior N.C. State-commit Aaron McLaughlin.

McLaughlin connected with Sam Perry for a 15-yd TD pass with 8:29 left in the half. Gainesville then fumbled on its first play after a penalty and McLaughlin and the Danes wasted little time as McLaughlin connected for a second time with Brown on a 21-yard TD pass on the next play for what looked like a comfortable 21-0 lead.

But the Red Elephants finally got going late in the half as Naim Cheeks sprinted 63-yards for a score to cut it to 21-7. In perhaps the biggest play of the game, moments later Jahleel Rivas-Dicks picked off McLaughlin and raced 105 yards on a pick-6 to inch the Red Elephants closer by halftime.

But the play was eventually called back on an “inadvertent whistle” so the points were taken off the board and it stayed 21-7 at the break.

In fact, it stayed that until the fourth quarter. And as has been its custom in 2020, the Gainesville offense staged a furious comeback.

Gionni Williams connected with JT Drinkard for an 80-yard touchdown pass on the opening play of the quarter to cut the lead to 21-14. Williams capped Gainesville’s next drive with an 8-yard scoring run, dragging a pair of tacklers the final 2-yards to tie to game at 21-21 with just over six minutes left. Williams kept the drive alive twice with a 28-yard first down run and then a pass to Drinkard on third down.

However, just when they need McLaughlin most the Danes offense, which had just one first down in the second half until their final drive, answered the call.

They converted on two third-down plays and then Trey Glymph capped a long drive with a 22-yd field goal with 1:53 left to take the lead.

Gainesville did not go quietly, however. The Red Elephants drove deep into Denmark territory before eventually getting stopped on downs with just 36 seconds left to seal the game for Denmark.

Gainesville plays host to North Forsyth next week as the two teams’ will battle for third place.