Taylor puts Acura Team Penske on the pole at Sebring 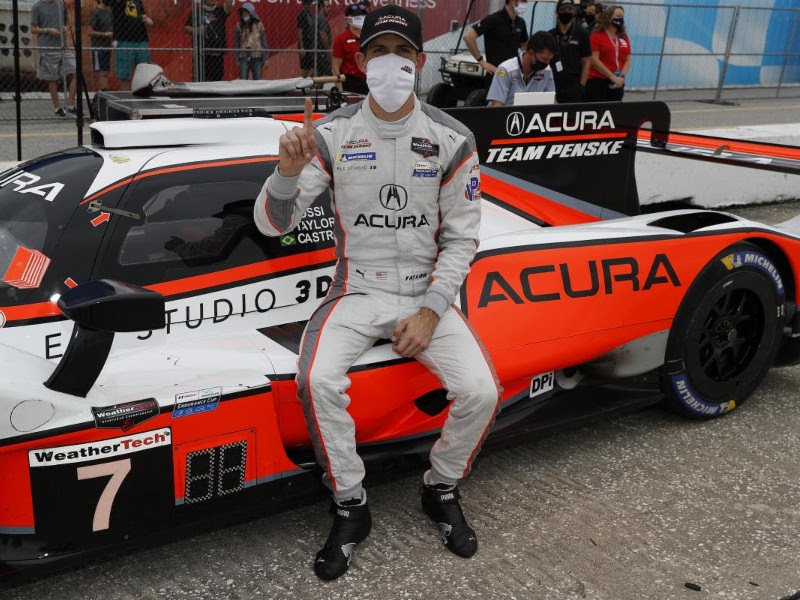 SEBRING, Fla. - Ricky Taylor understood the pressure he faced, and used it to his advantage.

Taylor, trying to chase down the fastest qualifiers, turned in the fastest lap Friday to win the Motul Pole Award for Saturday’s Mobil 1 Twelve Hours of Sebring.

“I get nervous before every single race or qualifying – any time you have to do something where there are stakes on the line and you have to do your best,” Taylor said. “I think if you’re not nervous or don’t feel the importance of it, you’re not going to get the most out of yourself and your equipment. I think having the pressure on is going to bring us to the best of our game.”

In Taylor’s case, the best was a nearly perfect lap around Sebring International Raceway’s 17-turn, 3.74-mile circuit. Taylor was clocked at 1 minute, 46.874 seconds (125.979 mph) in the No. 7 Acura Team Penske Acura ARX-05 DPi. That topped Renger van der Zande’s best lap of 1:47.125 in the No. 10 Konica Minolta Cadillac DPi-V.R. It is the sixth consecutive pole position for Acura Team Penske in IMSA WeatherTech SportsCar Championship competition this season.

Taylor, who will share the No. 7 Acura with Helio Castroneves and Alexander Rossi, is co-leading the Daytona Prototype international (DPi) driver standings with Castroneves, while also helping the No. 7 lead the team championship.

They are just two points ahead of the No. 10 Cadillac and Van der Zande and his full-season co-driver, Ryan Briscoe. The No. 10 Wayne Taylor Racing entry will be joined Saturday by six-time IndyCar Series champion Scott Dixon.

“It’s such an amazing way to end a championship,” Taylor said of the duel with his dad’s team. “As a fan, you want it to come down to the last race. Basically, whoever wins the race wins the championship. I don’t think you could have scripted it any better. To be racing against the (No.) 10 car, of all teams, is really weird, but it’s fun. I wouldn’t want to be racing against anybody else.”

The No. 31 Whelen Engineering Racing Cadillac and driver Pipo Derani have remote hopes of pulling out the team and driver titles, sitting nine points behind the No. 7. Derani, who’ll share the No. 31 with Felipe Nasr and Gabby Chaves, qualified sixth on Friday. Derani, Nasr and Eric Curran won last year’s Twelve Hours of Sebring in the No. 31.

Kelly Adapts And Puts No. 52 ORECA On LMP2 Pole

Kelly, who shares the No. 52 with Simon Trummer and Scott Huffaker, topped the best lap by the No. 51 Inter Europol Competition ORECA LMP2 07 driven by Naveen Rao, who is fresh from winning the IMSA Prototype Challenge championship last month with Matthew Bell. Rao, Bell and Jakub Smiechowski will share the No. 51.

Heylen Slides into No. 16 Porsche and Claims GTD Pole for Sebring

Jan Heylen made the decision look brilliant for him to qualify the No. 16 Wright Motorsports Porsche 911 GT3R on Friday at the Mobil 1 Twelve Hours of Sebring.

The Belgian rewarded the choice by winning the Motul Pole Award in the IMSA WeatherTech SportsCar Championship’s GT Daytona (GTD) class but admitted afterward it wasn’t the result of any tense brainstorming sessions in the Wright Motorsports camp.

Regardless, Heylen will lead the 13-car GTD contingent to the green flag Saturday as he and teammates Patrick Long and Ryan Hardwick vie for the race win and season championship. Heylen put the No. 16 atop the GTD qualifying chart with a lap of 2 minutes, 0.844 seconds (111.416 mph) that was seven-tenths of a second clear of the field.

Hardwick is normally the qualifying driver for the No. 16, but he volunteered for Heylen – who joins the team for the endurance events – to handle the chore this week. Heylen rewarded the move by posting the pole-winning time on his lone flying lap.

“My tires were ready to go when we decided it was time to go, which was always going to be on our second time by after two warmup laps. The tires came in at the perfect time, so it all worked out.”

The No. 16 Porsche trails the No. 86 Meyer Shank Racing with Curb-Agajanian Acura NSX GT3 by seven points going into Saturday’s 12-hour season finale on the historic and demanding 3.74-mile, 17-turn Sebring circuit. Long and Hardwick are also seven driver points behind Mario Farnbacher and Matt McMurry, who share the No. 86 this weekend with Shinya Michimi and will start eighth.

Heylen likes the way his car has handled this weekend, raising hopes of a come-from-behind effort for the GTD title from the single-car effort in its first full WeatherTech Championship season.

“It took a lot of hard work from the whole team to get here at the end of the year fighting for the championship,” Heylen said. “The car has felt good all weekend long. At least from the time I spent in the car, I believe it’s the best car we’ve gotten this season. That’s very encouraging for the race tomorrow. Obviously, pole position is the best way to get the weekend started, but all the big work is yet to do tomorrow.”

It marked the fifth consecutive pole position this season for the No. 3, which has also won five races and already clinched the GTLM driver and team championships.

Garcia termed his first pole-winning effort at Sebring “like a perfect lap,” adding that the team used Taylor’s previous record in July as a standard for this weekend.

“Obviously, Jordan had a pretty similar qualifying lap here in July,” Garcia explained. “Yesterday, I could actually compare our laps (in practice) to that lap, even if it was almost three seconds faster than the best we did yesterday. It seemed impressive, but at least I had a target to know what the car was capable of.

“I think this is the fastest I’ve been around here at Sebring. It was a pretty cool lap and zero mistakes. I think I just nailed the peak of the grip, peak of the tires. Happy with that.”

“I’m expecting a lot of close fights tomorrow with either BMW or Porsche, but for sure we are starting at the best place there,” he said. “Let’s see what tomorrow brings; it’s going to be a long one. … And a classic one, where we finish at night and we really need to adapt to that. Let’s see what the new Sebring date brings for us. It’s going to be challenging, for sure.”

NBC Sports’ live coverage of the full Mobil 1 Twelve Hours of Sebring begins at 10 a.m. ET Saturday on NBCSN. It moves to NBC at 3 p.m. before returning to NBCSN at 6 p.m. until the race’s conclusion.