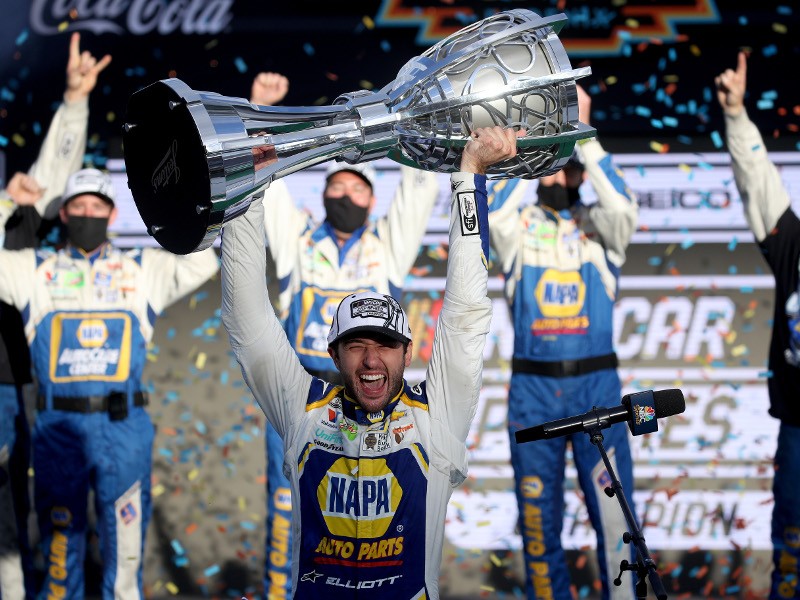 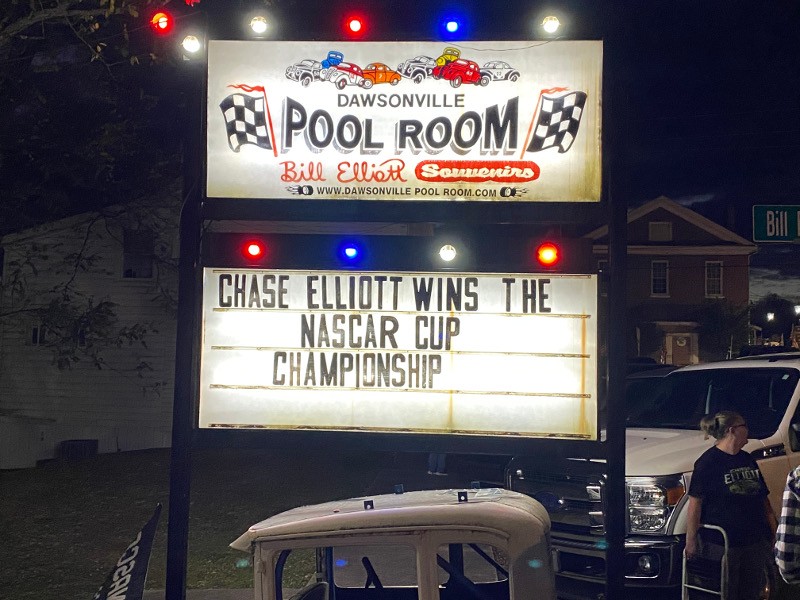 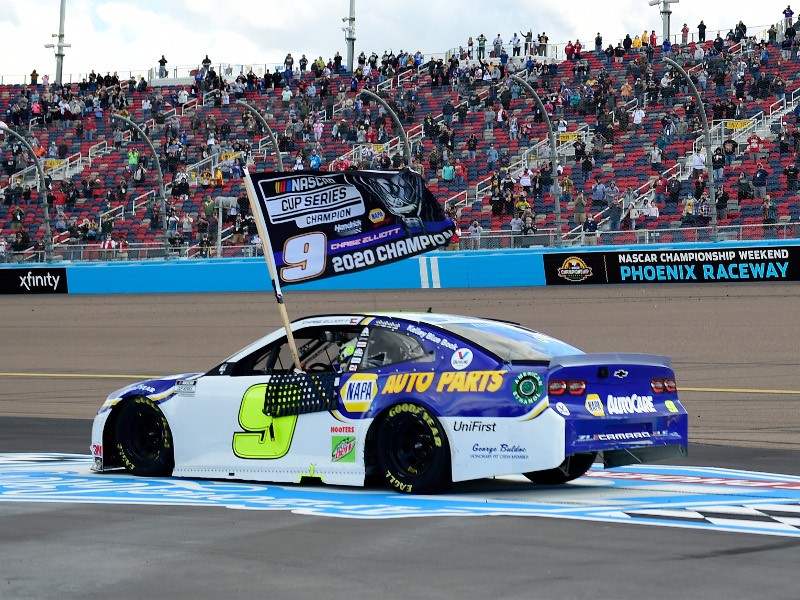 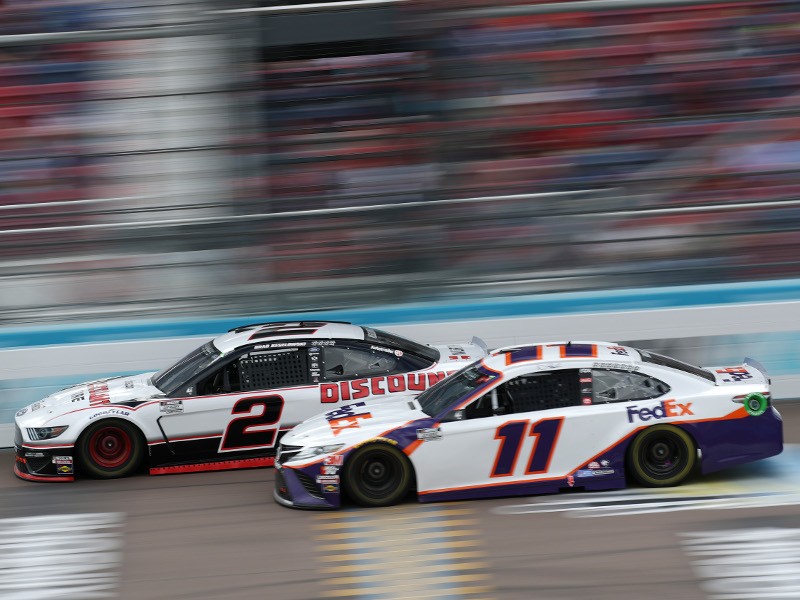 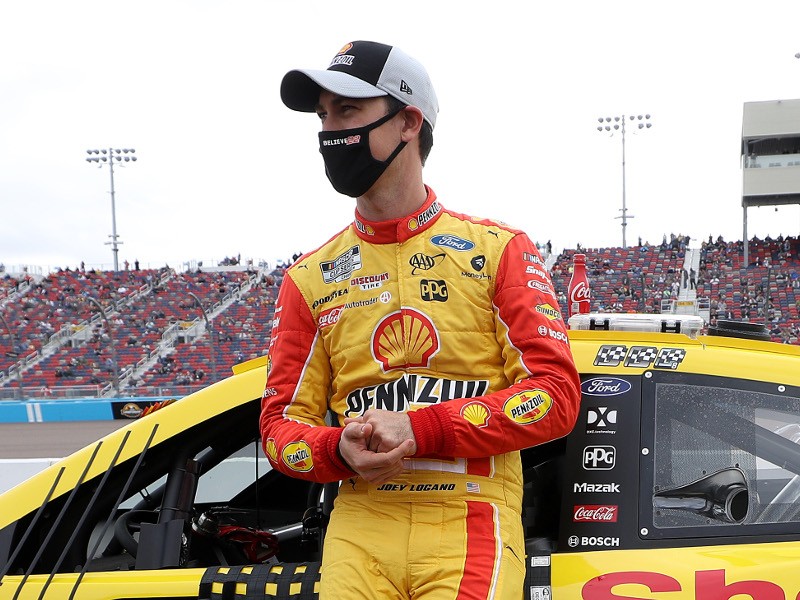 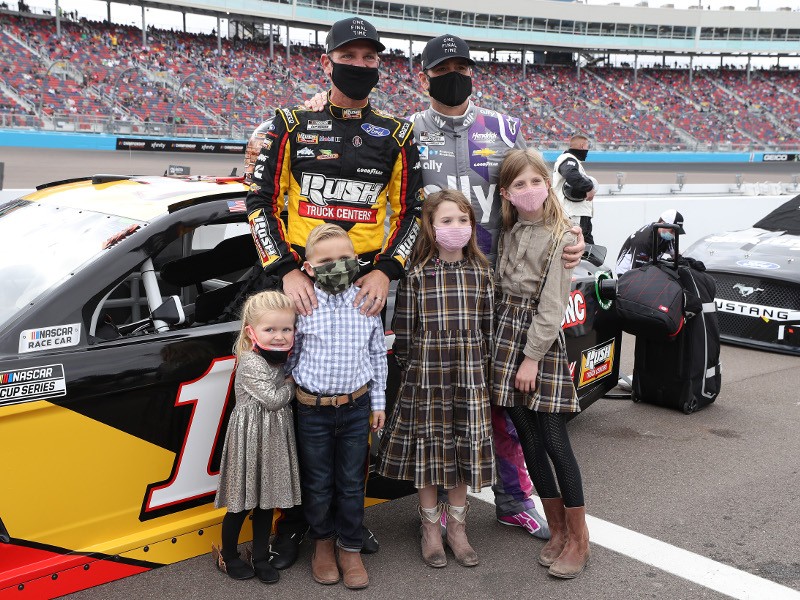 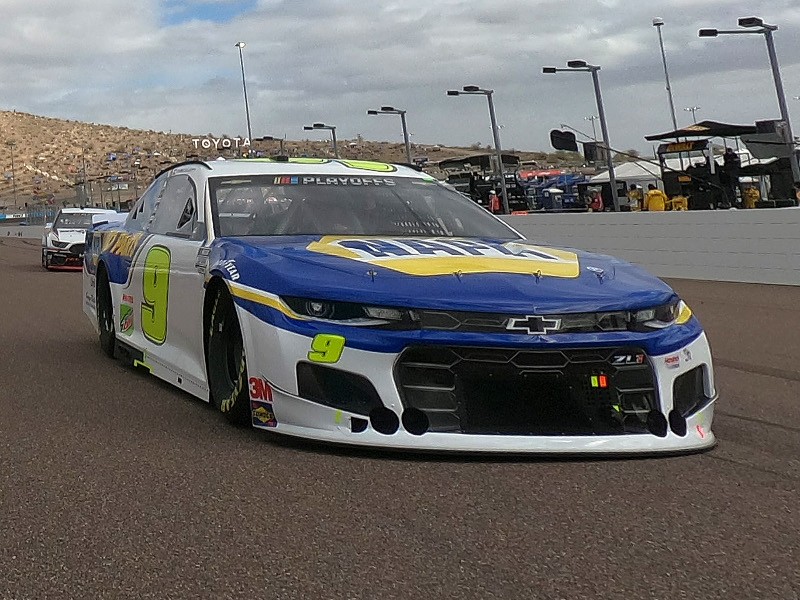 Chase Elliott was not going to be denied on Sunday.

The Dawsonville, Georgia speedster powered back from a pre-race penalty that had him start dead last on the field to the front of the pack.

From there, Elliott time and again outran the competition to score the victory and the 2020 NASCAR Cup Series championship at Phoenix Raceway.

“I’m at a loss for words. This is unbelievable,” said Elliott after climbing from his No. 9 Chevrolet. “Oh my gosh. We did it. That’s all I’ve got to tell you. Unreal.”

The win set of a scene of jubilation for the crowd packed in at the Dawsonville Pool Room, where the famous “si-reeen” is set off for every Elliott win. Sunday, they celebrated not only Elliott’s 11th career series victory, but a title win for the 24-year-old Georgian.

While his fans celebrated with an impromptu parade in downtown Dawsonville, Elliott was trying to comprehend his accomplishment some 1,800 miles away in Avondale, Arizona.

“I just can’t say enough about our group,” said Elliott. “I felt like we took some really big strides this year, and last week was a huge one. To come out of that with a win and a shot to come here and have a chance to race is unbelievable.

Elliott converted his first trip to the Championship round into his first series title. It’s also the first Cup Series title win for a Georgia racer since his Hall of Fame father, Bill Elliott, won the championship back in 1988.

“Oh, it’s unbelievable. All you can dream for is an opportunity, and I’ve been very fortunate to have that over the years. You know, and that’s all thanks to some great people. You know, my parents obviously have played a huge role. The past year has been tough. I lost my best friend about a year ago tonight. Lost my grandmother last year. And all those things bring families closer, so I really can’t thank them enough.”

The Elliotts become the third ever father-son NCS champions, joining Lee and Richard Petty and Ned and Dale Jarrett on an exclusive list.

And what advice did the elder Elliott share with his son before the race?

“He told me, ‘all you have to do is beat three people’,” Chase Elliott said. “He said all week he felt confident that we could come out here and do this. And he was right.”

Elliott made the final pass for the lead with 43 laps to go after fellow Championship 4 contender Joey Logano beat the field under green flag pit stops to take the top spot.

Elliott drove away over the final 42 laps, going unchallenged en route to the win and the title.

“You know, I saw Joey was pretty loose there and felt like I needed to get to him while I could,” said Elliott. “I knew I’d been kind of tight on a longer run and he was probably going to get a little better. Just unbelievable.”

“I mean, I just never would have thought that this year would have gone like it has. I mean, NASCAR Cup Series champion; are you kidding me? Unreal.”

The Championship 4 of Elliott, Logano, Brad Keselowski and Denny Hamlin battled among the top four on the race track for most of the day, with Logano and Keselowski splitting the first and second segment wins.

Keselowski, despite having the fastest car consistently all day, was set back time and again by pit stop woes. He would pace the field twice for 16 laps, and put on a valiant charge near the end, but came up short with a second place finish.

“Yeah, I would have liked to have one of those late-race yellows like we saw in the truck race and the Xfinity race,” Keselowski said. “I thought we were pretty good there and just didn’t have the track position to make it show. I knew we had a good shot at the end of the second stage and just couldn’t keep it up in a spot to where we could have the lead. I’m really proud of the speed we had. It was a solid day. I just wish we had one more spot.”

Joey Logano led four times for 125 laps – second only to Elliott – and seemed to hold the measure over the field early. While he stayed in contention all day, he came home with a third place finish in the end.

“I just didn’t have the speed at the right time,” said Logano. “Early in the race our Shell Pennzoil Mustang was really fast and nothing anyone did wrong. Our pit crew was on it. Our strategy got us out front there at the end, but the 9 (Elliott) seemed like he lit off there pretty good there and that last run was able to go really fast, and then got another vibration there towards the end of the run and lost the turn and was still a little free off. We were close. Everyone executed and did their job and that’s what we should be most proud of and also is how far we’ve come from the beginning of the season to now as a team. There’s a lot to be proud of.

“It stings not winning. I’m not gonna lie, it hurts, but at the same time we’re stronger because we went through it.”

Denny Hamlin came into the day with the second best record in the 2020 season, having scored seven wins on the year. But the driver of the No. 11 Toyota fought handing issues all day, settling for a fourth place result.

“We were a little off handling, but overall car speed, we just didn’t have enough,” said Hamlin. “Our next best teammate was 10th, so as an organization we have got to get a little better, especially on the short tracks. It seems like we were a little bit off all year, and that was all it had, that’s for sure. I was pushing for everything I had. The FedEx Camry just didn’t quite have enough today, and we ended up fourth.”

Jimmie Johnson announced early on that 2020 would be his final full-time season as a driver. During his final start on Sunday, he moved his way up into the top 10, and in the end boasted a fifth place finish.

“It was nice to be competitive out there and run the top 5, finish in the top 5, but my bucket is full,” said Johnson. “NASCAR has been so wonderful for me. This journey has been more than I could have ever dreamed of or expected or hoped for.

“The last couple years on track weren’t as I dreamed up, but I’ve experienced the highest of highs and worked with the greatest people, been with one team through this entire journey, and just very thankful for all the people that have helped me get here.

“All those emotions and all that pride rolled up into just a huge smile today walking out on the grid.”

Clint Bowyer made the announcement a few weeks back that he would be hanging up his helmet at the end of the season to make the transition from the race car to the broadcast booth as a commentator for Fox Sports in 2021. Bowyer wasn’t a factor in the race all day, finishing in 14th – matching the number on the side of his Ford Mustang.

And the party for Chase Elliott in will continue in his hometown on Monday, as he and his crew are scheduled to be escorted through Dawsonville, Georgia at 4 pm. 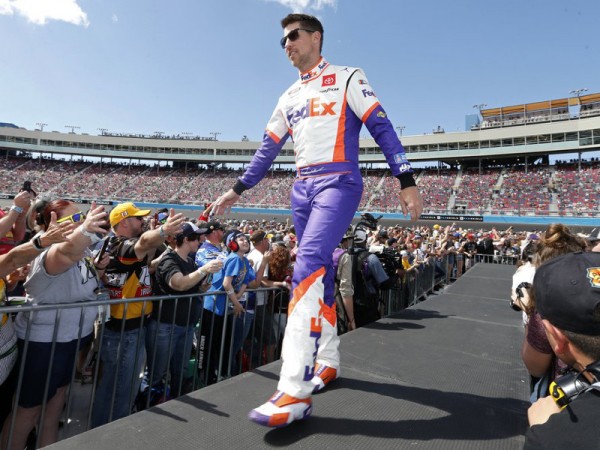 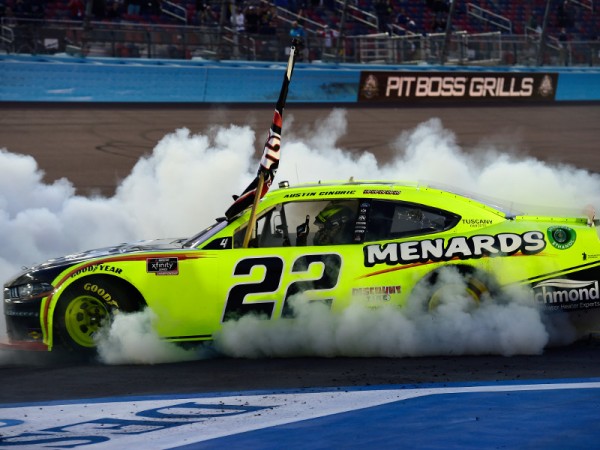 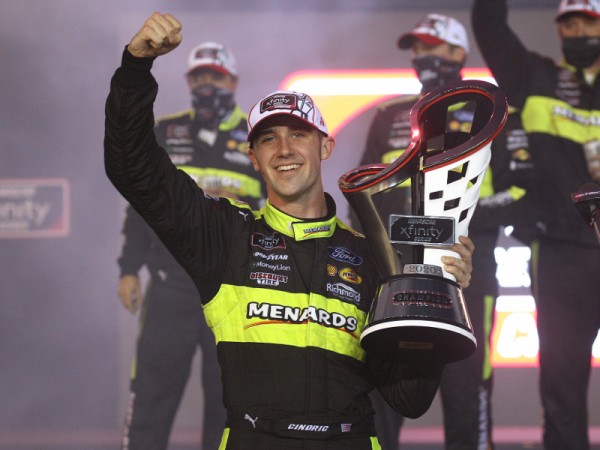 Last lap pass gives Cindric win, Xfinity title at Phoenix
Austin Cindric was not going to be denied his chance at his first NASCAR Xfinity Series Championship, even if that meant having to tear his way back to the lead in just three laps.
By Pete McCole 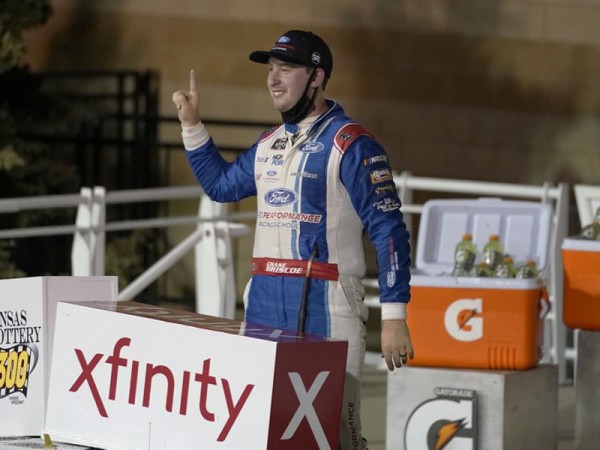 NASCAR's Briscoe balances title chase with off-track woes
Chase Briscoe has enjoyed the best year of his professional career: nine wins, an upcoming promotion to NASCAR's elite Cup Series and the chance to cap it with the Xfinity Series championship.
By Jenna Fryer-AP Auto Racing Writer 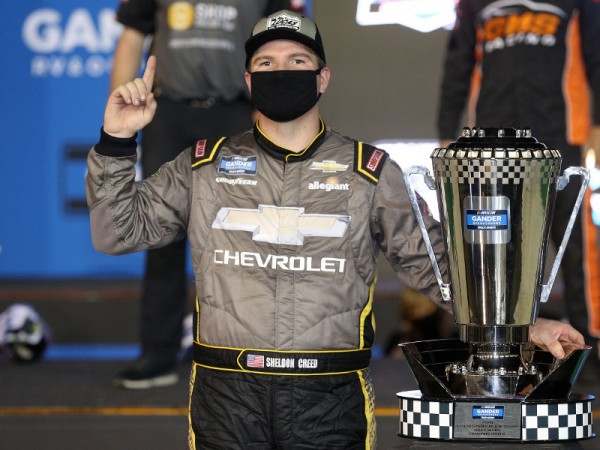