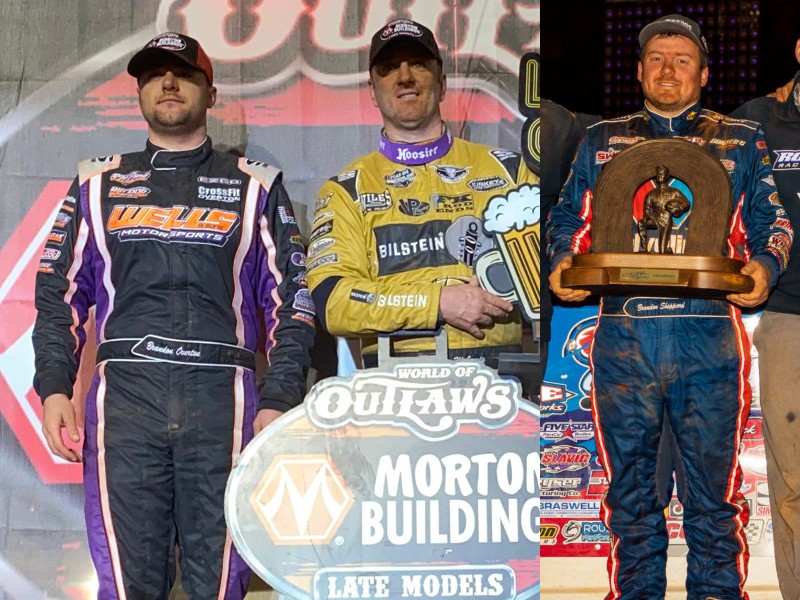 Brandon Overton and Tim McCreadie closed out the World of Outlaws Morton Buildings Late Model Series 2020 season by splitting the victories over the two night season finale at The Dirt Track at Charlotte.

On Wednesday night, Overton took the lead on lap 18 of the 50 lap feature, and drove on to the victory.

It marks Overton’s sixth series win of the season and 13th of his career. It’s also his 25th overall Dirt Late Model win in 76 starts on the season.

“Man, we’ve got one hell of a race car right now,” the Evans, Georgia racer said in victory lane. “I appreciate every single one of you up there in those stands. I’ve been coming here since I was a little kid trying to win this thing. I don’t know what to say, I don’t want 2020 to end, well at least the racing part.”

Dennis Erb, Jr. finished in second, with Tim McCreadie in third, Donny Schatz in fourth and Brandon Sheppard in fifth.

McCreadie capitalized on several restarts to build his momentum and finally take the lead from Weiss on the 31st lap. From there, he went on to the victory.

“Hats off to Paylor Motorsports, this is our home race for Donald and Gina (Bradsher),” McCreadie said on delivering a win for his car owners. “It’s pretty amazing to win here. I thought it was over in turn one when I made that mistake at the start. We were able to battle back and that’s pretty special considering the guys we had to race against.”

With 14 wins, 31 top fives and 36 top tens in 40 features this season, Sheppard of New Berlin, Illinois came out on top by 282 points to win his third series title in the last four years.

“This feels so incredible, man,” Sheppard said. “This team, these sponsors, everyone involved, it’s unbelievable what we’ve been able to accomplish these past few years. It feels amazing, I just hope we can keep it going. I know this is racing though and you never know when it’ll run out. We’re taking this in stride and rolling into next year with bigger goals in mind.”